The death of Kinect? PS3′s rebirth?

Nintendo have always been about fun. From Duck Hunt to StarFox, Mario Bros. to Mario Kart, Goldeneye to Zelda. They have always put fun at the forefront of their gaming experiences. The 2006 arrival of the Wii gave Microsoft and Sony a glimpse into the future and an idea of how gaming was evolving.

It also reminded these two big hitters that the original gaming mega-giant was still alive and full of inventive and creative ideas. This time game playing was meant to be just that, playing. The Wii invited players to stand up, jump around and run about. Suddenly, as someone later coined, we were the controller-ish. The Wii’s downfall was that you still needed a controller. It was a brilliant first step in the evolution of game playing but it certainly wasn’t the pinnacle.

Microsoft saw the immense success that the Wii was having and sought to replicate it with their Kinect. They married serious/hardcore gamers with the more casual Wii gamer with one little black bar. The graphics that the 360 and its Kinect offered would surely nullify any threat that the Ninendo’s Wii offered? Well, quite frankly, it should have and this, coupled with a Christmas offering of Kinect Star Wars, could have been a massive notch on the Kinect’s bedpost. A Cheryl Cole or Megan Fox shaped notch. Instead, the announcement that “Microsoft and LucasArts have elected to move the launch of Kinect Star Wars beyond holiday 2011 to ensure the full potential of this title is realized” has left an embarrassing Vanessa Feltz shaped dent in Microsoft’s dirty mattress.

Sony has been sharpening their knives ready for some Christmas carving whilst all of this has been going on, too. Whilst Microsoft have been fuddling their Christmas plans with an under cooked turkey of Star Wars Kinect, Sony are ready to carve into their juicy bird with their cut-price PS3. For years the Xbox’s advantage over the PS3 has been their price. Now, with Sony lowering their price to something much more comparable to the Xbox, they look set to really take on Microsoft and sound the knell for its Kinect.

Imagine, if you will, a parent walking into Game or Gamestation this winter. They’re thinking of buying their child a games console for Christmas and what do they see? The Wii that their kid already has, a rather tempting Xbox and an equally priced PS3 with Blu-ray player, no extra subscription costs for online gameplay and LOVEFilm connectivity built-in. Which one are they going to go for? Playstation has often been seen as the premium console and now a premium console with a modest price could be the knockout blow that Sony have been looking for. 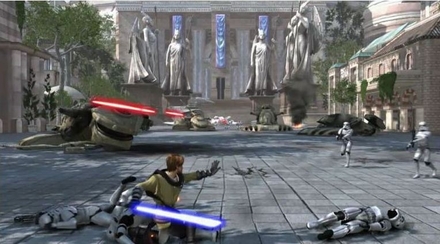 I feel a delay in the force!

This will, obviously, have a big impact this Christmas (let’s not forget that Nintendo are releasing the rather exciting 3DS Mario Land & Mario Kart in the next few months) on Microsoft’s sales but what about the bigger picture? If Sony ensure that they are the biggest sellers this Christmas and more and more homes have a PS3 then those homes are, surely, more likely to want PS4s when they, inevitably, come out. There were only four years between the Xbox and its big brother and six years between the PS2 and the PS3. We’ve been waiting since 2006 for a new offering from either. Even though we were promised a ten year cycle with this generation of console surely we’re due one imminently? Nintendo’s WiiU suggests that the gloves are well and truly off.

Is this price drop and Kinect’s failure to offer us something big this Christmas the opening Sony need? Time is looking short for Kinect and the future is looking bright for Sony. PS4 anyone?