The return of the female point of view!

Well, I’m back folks! For those who don’t know me, I’m Kirsty, girlfriend of Simon, mum to Jack and more importantly; a girl gamer! Although admittedly, the latter has had to slide of late. Since starting a full time job in August, I have had to push my gaming to one side to concentrate on that. I sacrificed my late night COD: WAW drunken sessions to make way for much needed sleep. One month later, I decided I missed my console too much and tried to make some time for gaming again.

“Slowly does it” I thought, while I got the hang of the feel of the cool white and pink pad in my hand once more. I was never that great at shooters… hang on, who am I kidding?! I was awesome! This however, was going to take some getting used to. It’s amazing how out of practice you get, but in some respects it is not much different from riding a bike, in that you may forget to begin with but it doesn’t take long to get back into.

I made my return with Halo: ODST. The irony lying in the fact that Halo 3 was where my journey began in 2007. Having completed that in a few days (and with only a few hours put into it because let’s face facts, it’s a pretty short game and not really worth the £34.99 I paid for it), to get online once more I had a bash on Halo 3 Multiplayer. Sadly my copy of COD: WAW (possibly my all time favourite game for online play) went some time ago. I do mourn for it though. Funnily enough, during my stint on Halo 3 MP, I commented that I was bored of shooting the hell out of the boys sat in their parent’s basements with only a cuddly toy for company due to their inability to interact with anyone face to face in human form. Funny why? Because ten minutes after coming out of the game I received a message and friend request  through Live, from such an idiot as fore-mentioned, asking if I wanted a shag. Hmmm, clearly not much has changed when it comes to the outlook on female gamers.

I quickly grew bored of ODST, despite a commitment to complete the legendary mode. I download a puzzle game from Live with some Microsoft Points I had remaining, I was the most disappointed I have ever been. Expecting at least a small challenge, I discovered I had thrown my money down the drain with a cheap version of Bejeweled with a terrible storyline. This was no good! I had even lost the ability to spot a game worth playing. Roll on the release of something I could get my teeth stuck into. 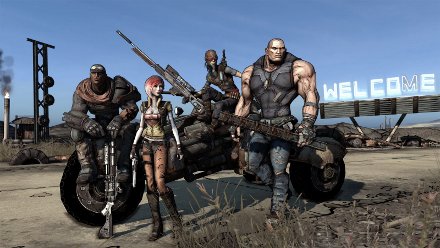 Due to being out of the gaming scene so long, I had to rely on Simon to make a decent suggestion for a game. Granted both Simon and Andy have kept me filled in on the happenings of TIMJ and gaming news, but generally it went in one ear and out the other. Sorry to disappoint, but my earlier enthusiasm for gaming disappeared, thanks to tiredness and stress. I had always intended to remain a part of TIMJ, but juggling life with it became near impossible. Now I know many people work full-time and still game and even write like our staff do, but when I’m out for twelve hours a day and have being a full time mum and dutiful housewife to fit in, I had to jump the TIMJ ship for a bit. As it happens, I write this while keeping an eye on five children (Si, Andy, my nephews and Jack), watching CBeebies and having a lazy Sunday afternoon. Now how’s that for multitasking?!

So along came Borderlands and Oh My God! COD: WAW what? That was quickly forgotten as this game took over. It’s extremely addictive and I like the Fable style quests mixed in with some decent combat and out of this world weapons. Of course, I play the girl (it would be rude not to) and I feel the Siren is perfectly suited to me as she kills a gang of bandits and modestly exclaims “God I’m good at this” followed by an evil laugh. Now this was what I was missing. Granted I thought it was too easy at first, but now I’m up to level twenty-eight and it’s beginning to get interesting. I tried playing it on co-op with my inexperienced twelve year old nephew the other night I re-spawned around four times in five minutes due to trying to rescue his butt. This was definitely a part where I needed a good gamer by my side. We got through one mission in an hour and it was an easy one for crying out loud! I’m looking forward to continuing through it, and the fact that it seems to have hours of play makes it all the more worthwhile, especially after spending £60 on two copies for the both of us.

I have had a stint (all be it very brief) on Forza 3, I only really played to A) show my stepson he could be beaten by a girl after being given a 20% head start and B) because my son really likes pretending he is driving. For the record, I don’t “do” racing games (although this strictly excludes Micro Machines because this is a superb game and deserves a comeback). It’s not because I am rubbish at racing games (unlike sporting games which I don’t “do” because I’m genuinely appalling), but I find driving, in effect a cartoon car, mind numbingly boring. The novelty of the challenge of winning without crashing soon wears off. Give me a shooter or an RPG any day and I’m happy.

So, while I’m occupied with my bad ass girl on Borderlands, I step further towards a time that I can pick up Left 4 Dead 2. This is my most anticipated game of 2009, and I only hope it isn’t a let down because I really have all my hopes pinned on this one. Despite all the hype a while back and everything kicking off with fans point blank refusing to pay for a new game while the first is still awaiting content, I am willing to put my trust in Valve to create an equally as good if not better, follow up. I’ve also recently got a hold of Modern Warfare 2, but I’m yet to sink any real time into it. I never even saw the first game, but I became terrifyingly hooked on WAW. Although I probably will get into it around the Christmas break so I can have lots of time with pure, unadulterated gaming pleasure… not to mention drunken online matches! 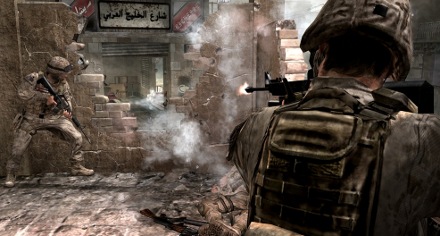 Looking forward to sinking some time into MW2

I may also put Ghostbusters on my Christmas list, although I think that may be a rental as Christmas with three kids doesn’t come cheap, and generally major games such as L4D2 and MW2 involve purchasing two copies for our two consoles; there is no more split screening in my household. I wouldn’t mind seeing if I can get my mitts on Lego Indiana Jones 2 for a bit of light hearted gaming too.

All in all, it looks like my gaming calendar is full in the run up to Christmas, and January wont be much different. With Army of Two: 40th Day coming out and after the laughs Simon and I had on the first game, this is a must purchase. Hopefully I can fit in some more editorials and/or reviews and make a decent comeback to TIMJ, because I sure have missed it. If I do have to take a step back again, I’ll make sure I’m not away for quite as long; I hate feeling left out!