Valentine’s Day. What does it make you think of? Roses? Candlelit dinners? Boxes of chocolates? How about MW3 or FIFA 12? Not many men, who have partners of the female species that is, would instantly think of the latter. Society urges us to think of the former. As a man who likes few things better than to be alone, to pick up his controller and have a little play by himself, I have to take a step back and have a look at the impact that gaming can have on a relationship.

Firstly, there’s the social aspect. Like me, you’ve probably tried to argue with gaming critics that gaming is now a much more sociable experience due to services like Xbox Live. If, however, unlike me you’re man enough to admit the truth, it really isn’t. Is it? Let’s be honest! It’s great to play games with friends who aren’t in the same building as you, granted. However, more often than not we end up playing games against faceless, and often real-nameless, people who could be A.I. for all we really know.

The real beauty of gaming is the way in which you can lose yourself in the virtual world you choose. When I’m playing I don’t want any disturbances or discussion. I want to be running about killing zombies, scoring goals or ending nuclear terrorist threats. That’s why I love gaming.

One game that had a particularly huge impact on a previous relationship of mine was Football Manager. I was in my late teens and my girlfriend would come around only for me to sit at my computer for hour upon hour, whilst my now ex-girlfriend was left to chat with my mother. This wasn’t fair on either party (especially as I later found out that they weren’t overly fond of each other!). The problem with something like Football Manager, though, is that it isn’t a game where you can just switch it on for a half hour and have a quick whirl. It needed my absolute dedication and attention. It said a lot about my relationship that I was willing to devote more time to my managerial career than her! 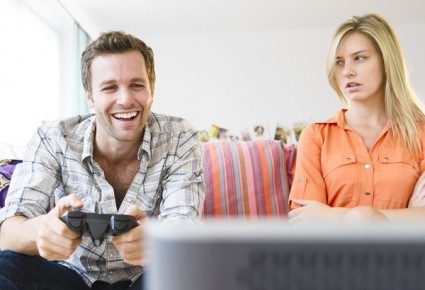 Sometimes she doesn't understand me...

I recently got engaged to a wonderful Irish girl who isn’t that keen on the video gaming experience. In fact, I’d go as far as to say she actively dislikes it! She, unlike other girlfriends, is willing to put up with me playing on my 360. She, God bless her, is even willing to feign delight when I score a wonder goal in FIFA Head to Head seasons. That’s where relationships succeed or fail; that willingness to allow the other to do what they want. I’ve got to endure some crappy TV shows in order to earn some game-time, but it’s a 50-50 agreement.

Some couples share the same ideals as each other. Our own Andy, for example, enjoys playing games with his better half. I remember reading a tweet of his proudly stating how she was about to embark on a Skyrim mission for the first time. Part of me twanged with jealousy. “Would my fiancee like to play FIFA with me? Would she fancy going co-op on Gears 3?” Then I realised that the best thing for our relationship was that she didn’t want to, but was happy for me to do it. Each and every relationship is different in their handling of gaming lives. Some share the experience, and game experiences from the Wii to Kinect are evolving this all the time, but some couples decide that the experiences should be individual.

The most romantic thing that could be done for me this Valentine’s Day? For her to hand me my controller and say: “See if you can finish that campaign you’ve been playing for a while. I’m off into the other room to watch Home and Away…”