The only contact I’d ever had with Asura’s Wrath prior to this demo was a very pretty looking, yet confusing trailer that was shown at E3 last year. What could be taken from this trailer? Well, the only thing that I took from them is that the game is completely and utterly insane.

Even after playing the demo through several times it is difficult to gather my thoughts into a constructive and descriptive article; there isn’t a scrap of sanity to be found anywhere in what I have played. There have been many games in the past which have enthralled me with intriguing madness and absurd story, but is it going out of its way to be deliberately insane?

There is no easy answer to this question, and so far my many attempts at playing the demo have left me with many thoughts.

Asura was once a General in the army of the Gods, but after returning from a valiant battle he is blamed for the murder of the Emperor. He returns home to find his wife dead and his daughter has been kidnapped. While attempting to find his daughter and those who took her, Asura is thrown from a tower and tumbles to Earth. He wakes up many, many years later (12 millennia) and sets about trying to save his still-missing daughter by fighting all the Gods who stand in his path. I would like to add that none of this information is really prominent or available in the demo and I had to do a little extra reading on Wikipedia to figure it out. Needless to say you will still be a little confused as to what is actually happening. 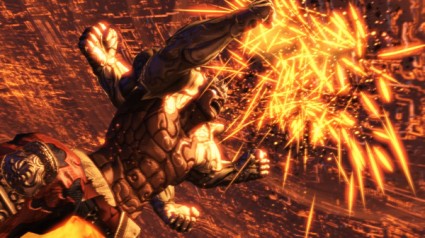 As I am sitting here, I am literally asking myself, “where the Hell do I start!?” I guess the best place would be to start at the beginning, but even that is a little confusing when it comes to Asura’s Wrath. The demo has two playable sections of the game; chapters 5 and 11, which to me seems like a rather unusual cross-section of the game to choose.

The difficulty I have in explaining the game is not purely from a narrative stand point; where it really becomes difficult is trying to describe how you are playing it. You find yourself faced with a towering stone giant that looks a bit like an enormous Buddha statue. You are instantly thrown into the game starting with several quick-time event segments, but this isn’t the only style of gameplay that Asura has under its belt. 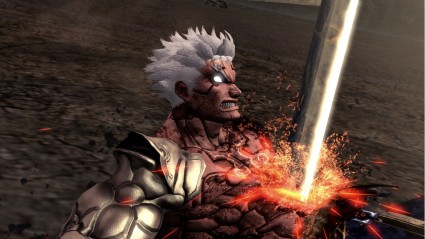 This is going to sting a little....

You are then thrown into various other styles of play; fixed 2D perspective like an old-fashioned brawler, then another fixed perspective while using a reticule to fire at the enemy and then eventually it opens to 3D combat. To my surprise you could only move left and right and jump; you were completely fixed on a path.

The game leaps from style to style; Heavy Rain-a-like to an on rails shooter that reminds me of the Sega classic Space Harrier and then to God of War style gameplay. I was a little thrown by this, but hey, I figured I would just roll with the punches and see where this takes me. Seconds later I am being attacked by something that looks a little like an alien mother ship, which is a little out of context with the rest of the game stylistically.

In chapter 11 there is a little more of a 3rd person action game vibe. This is where things start to settle a little bit and you are using combinations of shooting attacks, punching, blocking and countering to defeat your foe in a more all-inclusive fighting mechanic. The fighting sequences are seamlessly blended with other button bashing and button pushing events, with excellent results.

This is the part of the demo where Asura’s Wrath begins to show its full potential. Underneath the façade of grandiose cut-scenes and limited gameplay, there beats the heart of a well-crafted 3D brawler. Even down to the classical score (Dvarok’s No. 9 Symphony) chosen to accompany your fight. Every detail has been catered for and is used to create this incredible atmosphere. 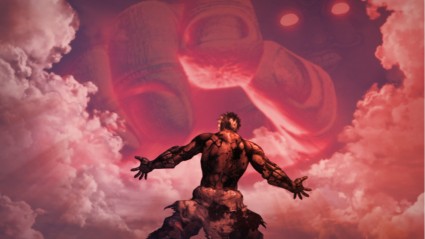 Come at me bro!

So where does this leave us? I think that the obvious statement to make is that everyone should give this demo a try. I can’t quite make up my mind as to whether I love or hate this game. The portions of it that include actual gameplay are sublime, but these are fleeting moments, or at least the demo would have you believe this. I have no issues with games using quick-time events to progress through scenes to make the user feel like they are doing something; I was a massive fan of Heavy Rain and that is practically the entire game.

Like I said, the parts where you are in control of Asura feel really good, I just hope that the full title has larger sections like that and less of the quick-time parts. It isn’t that they are bad, it’s just a shame to hide the well-designed 3D brawling combat with basic button pushing while watching a video. I still can’t make up my mind about whether this will be a purchase or not for me.

Maybe they just chose the wrong chapters to show in the demo, and the rest of the game is full of action packed awesomeness! It would truly be a sad thing to see a game with such promise turn out to be little more than an interactive cut-scene.