Enslaved is a game that in all honesty I haven’t paid any attention to. I had seen it advertised but that was about it. With the demo on Xbox live, I decided that it would be a good time to start paying attention and seeing if it’s any good. Developed by Ninja Theory who are famous for Heavenly Sword which was well received and for the first time, having a game go multiplatform.

So without further ado, pop your shirt off, get some wicked branding and put some red paint across your eyes, let the oppression begin.

You begin the game in a cell, it’s not explained why you are there or what you have done, let alone who you are. After a short intro and everything going from bad to worse, you witness a woman escaping from another cell. After your cell is caught up in an explosion your character escapes, you then start working your way to escape impending doom as the place you are in is exploding around you. Taking control of the character you navigate your way though the dungeon style rooms, learning the controls along the way. Initially you are not in danger or in combat and the jump button works two ways; allowing you to roll, and when near the edge of a platform to jump across. Jumping from platform to platform made me feel like I was in a futuristic version of Prince of Persia and this was confirmed more when I got further into the demo.

After the initial jumping around and running into explosions, a cut-scene takes over and we see the mysterious woman again running off, with no intention of answering you as you shout at her. All of a sudden you are thrust into another cut-scene and you realise you are on a ship above a planet. The backend dismantles and you are left holding on for your life. This is when the game turns very much like Prince of Persia as you jump from foothold to foothold, to clamber up onto the platform again. Back inside the ship we set off to get our weapons.

After navigating around a mechanical guard hell bent on killing you, you finally get your weapon which is a retractable bow staff. Using this you can now start to fight. You can block with what seems to be some sort of shield and attack using two buttons for light and heavy attacks. Using a combination of light and heavy attack buttons along with the jump button, you can create a variety of combos. You start off with just the one enemy and finally onto several enemies at the same time. 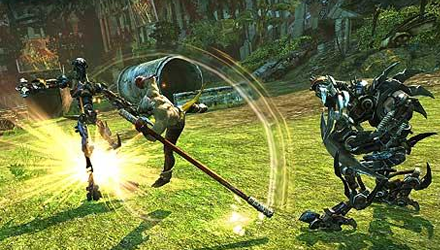 The remainder of the demo is pretty much the same except you not only traverse inside the ship but also to the outside of the ship too. As you clamber up a wing, you see that you have to get up there very quickly as it’s about to hit a building. At this point you see that you are in fact flying over an apocalyptic version of earth, when you initially hit the torch of the statue of liberty. Finally you get to the end of the level and attempt to escape in the last escape pod, only to see the woman that you have been chasing inside. With her having no intention of letting you inside, she hits the eject and you are blasted off the ship along with it. Another cuts-cene and you see that you are laid on a bed, with the woman sat near. She explains to you that she has put a slave headband on you and she needs your help. This is where the demo ends.

The likeness to Prince of Persia is a good one and the gameplay seems very fluid at this point. Although the demo is short, it does make a lasting impression on you. The combat style is similar to that of Ninja Gaiden but with a less harsh difficulty curve. That said, the elements of Prince of Persia add a much needed breather away from your normal hack and slash. Overall the graphics look well done and there seems to be no optimisation issues with the unreal engine. At this stage I would say that the game is one to watch and one that could appeal to a wide audience including die hard Prince of Persia fans. Giving a much needed break away from the doting prince and buckets of sand, this futuristic hack and slash could very well be a day one purchase.