The original Mafia game is one of my all-time personal favourites. It wasn’t a brilliant game although I thought the PC version of the game was far better than any console version. Gameplay wise it was just another GTA clone with old cars, but the one thing that gripped me was the story. I liked the setting and how it all unfolded and I felt like I was a part of the game; I really felt like I was Tommy (the main character). The transition from taxi driver to “made man” then witness protection was fantastic and the dialogue up to the end of the game really set the mood and created an atmosphere that the Godfather games have failed to capture.

Eight years on we finally get a sequel and with the demo up on live, I have to wonder if this game for me will live up to the legend of the original.

Upon starting the game you are created with a short cut-scene you are introduced to three characters, a low level boss Henry, Joe, and the character we’ll be stepping into the shoes of; Veto. Once the scene is over you are taken to your safe house where the phone is ringing. As I panned the room I noticed that there were some refresh rate issues, but aside from that it strikes you that the place is a real replica of the era. The Radio is on and the music sets the mood (you can flick through the stations), and on the kitchen work surface there is Playboy magazine (an in-game collectable) with a tasteful picture of a naked woman. It’s worth wandering around the house, seeing what else you can interact with, such as changing clothes or grabbing a bite to eat from the fridge.

Leaving the house, you can go into the garage and pick your car and you’re off on your mission. Each of the three cars included in the demo handles differently and as with everything else, each is very true to the era. Returning to the game is the speed limiter, which allows you to stick to the speed limits to avoid any unnecessary attention from the law enforcement (the previous game required you to adhere to the road laws). The streets are filled with people, cars and other life, including pigeons that actually behave like birds, landing on overhead lines. Each person seems to have their own personality and reacts to you differently depending on your actions.

As you drive about you are greeted by the city which looks similar to New York and is truly breathtaking. While driving I happened to have a few bumps and the damage is clearly and smartly visible on the car. One bad corner and some nice tyre marks are left visible on the road, little touches that bring the world to life. Being on a time limit to get to my mission I quickly stopped messing about and arrived speedily to my destination. 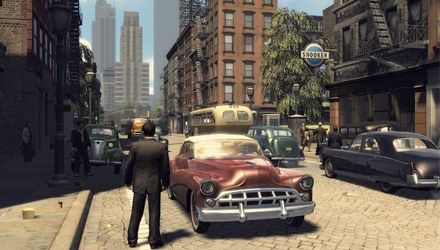 Simply breathtaking and bursting with life!

One other cut-scene later and I’m thrust into combat on a mounted gun.  The screen shakes as I fire from above, killing the enemies, adding some realism. At this point I aimed to blow up a car just to see what happens and a brilliantly executed explosion happened in front of me. After leaving the gun, you chase after your target who runs into a warehouse. Using the new addition of a cover mechanic, I quickly dispatched the enemies outside with the semi-automatic handgun that I had in my inventory. Most noticeable almost immediately is the feedback on the guns and each reacts differently when you are firing so having to compensate for this is a must. Running past the burned out car and straight into the warehouse, I am instantly under fire. After killing a few enemies, someone throws a Molotov at me and before I know it the building is on fire. Racing up to the top of the building while dispatching more gangsters along the way, with a brief ride in an elevator as respite, I reach the man I was chasing. Things take a turn for the worse as one of the main characters is shot. The building is on fire and escape has to be pretty fast. After killing some more enemies and navigating the fire, I jump in a car and we are off, with the police are already in chase. After a short game of cops and robbers, we get trapped on a bridge, and before we find out how our character handles the situation, we are treated with a frustrating ‘to be continued’ screen, before the demo ends.

With the demo over I found myself sitting silent. ‘Why?’ you ask? I shall tell you all. Remember that right at the beginning of this demo impression where I mentioned atmosphere, and how the original game made me feel? Well, that’s exactly the way this demo made me feel. After that small sample, if I had to take a guess, I would say that the final version may well be something that GTA has to live up to. Hopefully this isn’t a case of a good demo, followed by a rubbish game. I look forward to getting my copy.