Based on a novel of the same name, Bedlam is pitched as a shooter for “those who survived online gaming in the 80’s and 90’s”, and is a nostalgic first-person shooter.

Bedlam, the novel, gives you the story of Ross Baker, a scientist who volunteers to be a test candidate for a new brain scanner. Upon ending the experiment, Ross discovers that he’s no longer “in real life” and is instead trapped in Starfire; a violent sci-fi game he played as a teenager.

The game takes a slightly different path as you play as Ross’s colleague, Heather Quinn. You don’t need to have any prior knowledge of the novel in order to play Bedlam, in fact, it may serve you better not knowing and experiencing things for the first time along with her. Heather also finds herself in Starfire, and Bedlam throws you into the action, with little-to-no explanation of mechanics. By doing this, you have the same fish-out-of-water experience as Heather, creating a bond with the character you’re controlling. Luckily, the gameplay feels natural and intuitive, and you can make sense of the objectives as they come. 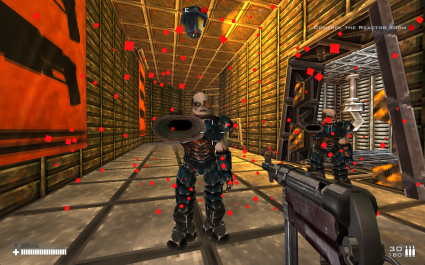 Despite their appearance, these guys are actually on your team

Heather, going by the alias “Athena”, is charming. With a broad Scottish accent, she isn’t afraid to voice her thoughts and her dialogue feels authentic, littered with curses and colloquialisms. Heather’s character is also the product of some superb voice acting, which adds to Bedlam‘s realistic vibe – or as realistic as a game about getting stuck in a game can feel. As you progress, Heather discovers she’s not on the team that she anticipated she’d be on, and playing as one of the perceived “bad guys”, you’ll find your loyalties tested.

With retro visuals seeming to be the fashion of late, especially with indie games, Bedlam is no exception. Showcasing its own vintage graphics to match the feel of games like Quake, Bedlam creates a whole world where you can believe you’re part of an old video-game. This isn’t necessarily a good thing as as the graphics can often be distractingly bad. With stealth often being your friend, it can be hard to see which way an enemy is facing from afar, so that sly manoeuvre you think you’re about to pull off can actually be a flashing neon light showing nearby enemies where you are.

Bedam will test you, and with different options for weapons and paths, you’ll be forced to think tactically. You’ll die and fail (a lot, if you’re anything like me) and many successful tactics will come by trial and error. Still, there’s good fun is seeing how your environment and enemies react to everything you can throw at them. You will feel like you’re being punished when you die, however, and failing feels like failing hard as, you’re forced to listen to the same dialogue time after time, which can be quite grating. 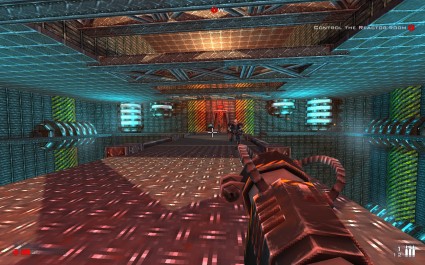 Graphics can often be distracting, with things in the distance hard to make out

Something that can take some getting used to, in the days of autosaving, is manually saving your game. Luckily, this is pretty seamless, and happens at the touch of one button, but in order to prevent mass repeats of the same areas, you may find yourself spamming the save button.

Developers RedBedlam have already released a bevy of updates for Bedlam, from additional, arcade-style levels to standard patches for technical support. If they can maintain and build upon the level of support received so far, then Bedlam promises to please fans of the FPS genre. If it’s a genre you can take or leave, then it’s probably best to leave, as though it’s accessible, it doesn’t feel the most inclusive experience. Thanks to the way you’re left to figure out most things on your own, it can often feel quite alienating.