Hands on: Alien Vs. Predator

While I was wandering around the Eurogamer Expo and sampling the delights, I came across Alien Vs. Predator. It was tucked away in a corner of the 18+ section, with four players all facing off against each other as the PS3 multiplayer was being demoed.

After standing in one of the four queues for what seemed like an eternity, I finally got the chance to grab the pad and road test the game twice (the second time facing off against none other than our very own Andy and two random members of the public for the battle of the century). Taking on the role of the Predator I set off on the hunt, to destroy anything with a pulse and to collect my enemies skulls like trophies.

The first thing you should know is that the game has three races that you can use in the MP (Xenomorphs, Predators, and marines, obviously) the same can be said for the single player campaign too, but that wasn’t on show. Each of the characters have their own characteristics and weapons. The humans have guns and ammo scattered around the arena, whilst being the hardest character to use due to having no real benefits. The Alien has nothing but its claws, but is extremely agile and able to run on any surface on the arena including the roof. Finally, the Predator has a whole host of weapons including the famous arm blades and that all-important auto-targeting gun. It also has the ability to not only turn invisible but to also track enemies by their heat signature, and finally has the ability to jump long distances. This makes this character the easiest to get to grips with.

Each of the death matches were set to ten minutes giving players just enough time to get to grips with their chosen character. As it happens, I picked the Predator (who wouldn’t?!), not because it was the easiest (honestly I didn’t know that till after the second match) but because I wanted to be the coolest looking harbinger of death ever (bet Jean Claude Van Dam wished he had stayed in that suit now!). 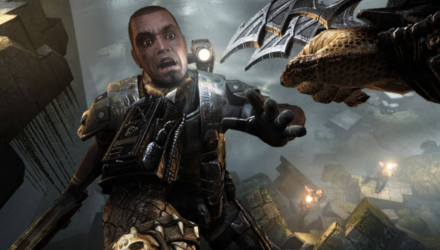 When the match started I instantly went to work, turning invisible and switching on my primary cannon using the D-pad (not that I used it much). I also enabled the infrared and quickly found that the controls were really well thought out and easy to pick up. I approached my first enemy (a human) and, using the right bumper button, despatched him only to turn around and to be attacked by an alien and killed. That’s when I knew this match was going to get ugly. My next victim was the Alien and after chasing him around the arena for about a minute, he finally stopped moving only for my screen to give me the option of a sneak attack. I caught him, sat back, and watched as the predator grabbed the alien by its throat, snapping out at the screen, only to die as I ripped its tongue clean out of its mouth. It was only after being shot from behind that I realised, just like in the movies, the predator wasn’t invisible when he did his kill. Quickly I ran towards my enemy and only just managed to kill him, my lesson was learnt. The remainder of the deathmatch pretty much went as follows; I killed everything! I probably only died three or four times after that, all following sneak attacks. In one instance, I thought I had killed my enemy, but to be prompted to finish him off; so I set about grabbing the enemy and sticking my claws though its head. At the end of my first match, I had dominated everyone playing and stood up to cheer for myself (Andy certainly wouldn’t!) as I had won. The other people playing didn’t seem happy so I made a swift exit and me and Jamie (AKA MightyMoots) went off to search out more games to play.

Later on, Andy and I spoke to the Sega rep’s looking after the game, so we could get on two separate screens in the same death match. Battle for male dominance ensued and I was victorious again getting eight kills more than Andy. Now some might say that I had an unfair advantage due to playing the game once before, where as Andy (who had also picked the predator) was learning the controls and getting used to the game (Note to these people I won fair and square, your views are irrelevant). He did kill me a twice in a row, he said that he saw me as I ran past him but it was just in the blink of an eye with no chance to get that sneak kill. The whole match was quite tense, one person was a human and the other was an Alien (him being the main one to watch out for).

Speaking to the rep prior, he informed me that the campaign is definitely a ‘three in one’ affair, and they each have their respective storylines. Judging just from the multiplayer, I will say that a hell of a lot of time and dedication has been put into just the multiplayer alone; I would even just get the game for that, as it really is spectacular.

So there you have it, we had some fun, some laughs, some bloodshed and a little decapitation. Speaking of which, I really must get me some of those claws and active camouflage, how else will I ensure world domination?!