It’s been a tough old year for Nintendo and their much maligned 3DS console. After poor sales that lead to a controversial price-drop just six months into the console’s life, they’ve since struggled to navigate the waters of the handheld market. As everyone knows, that’s just not like them.

With third-party developers currently letting them down in support, everybody’s eyes are on what the big N will produce from within.

At this year’s Eurogamer Expo, TIMJ’s James O’Leary was on hand to sample two of their most anticipated titles; Mario Kart 7 and Super Mario 3D Land.

Every console since the Super Nintendo has had its very own Mario Kart game, so it was only a matter of time before everyone’s favorite plumber turbo-boosted his way on to the 3DS. Mario Kart 7 was being shown here at Eurogamer, and surprisingly has had no queue, a trait which generally does not bode well for a game at these kinds of events.

In reality, the reason for this is that everyone knows exactly what they’ll be getting with Mario Kart 7, even without playing it. This wouldn’t be much of a “hands on” piece if I had passed the game over, though, so I took my place at the starting line and prepared for the green light. 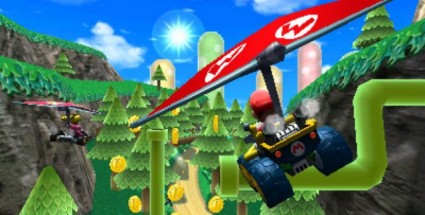 Mario Kart 7 is everything you expect it to be. It is exactly like the last three or four Mario Kart games, which depending on how you look at it, is both a good and a bad thing. On the good side of things, the series has consistently delivered in a good quality, fun, family friendly experience, with Mario Kart 7 being no exception to this.

The more cynical might see this as a lack of innovation within the series. Yes, you can argue that between Double Dash’s two characters to a Kart, the Wii’s motion controller steering and the introduction of Gliders and aquatic karts in this iteration, Nintendo have attempted to change up the game and keep it fresh. You can’t help but wonder, though, if it is enough to keep paying full price for each new version.

Despite my cynicism, I really enjoyed playing Mario Kart 7 at Eurogamer, and will definitely be buying it, since it’s a game that I know will deliver exactly what I want it to and not disappoint me.

Instantly, the thing that I noticed were that the colours in the game look stunning on the 3DS screen. The 3D effects are subtle, yet fitting, just giving slightly more depth to the already rich and vibrant tracks.

The three tracks available to play at Eurogamer were all brand new tracks, created to show off the two new features. None of the tracks on the demo were named, which is a shame, but are very recognisable except for the way they used the Gliders and Aqua Karts. The first track emphasised the gliders particularly, showing how you can control them in mid-air, which does a surprising amount in the way of changing your course and potentially, even winning you a race.

The second track was geared towards the Aquatic Karts, where a small propeller pops out the back of the Kart if you become submerged in the water sections of the course. From what I could see there wasn’t an added aspect of control like the gliders, rather this was just a way to include different track settings, as now the sea bed is available to race on. The final track mixed in areas with both of the new gameplay aspects over a Donkey Kong theme, giving it a very familiar feel to tracks on previous games.

The track designs themselves are superb and really show off the additions, as well as being fun to play. One of the features that wasn’t shown off so much at Eurogamer was the ability to control the Karts with the gyroscope within the 3DS. There wasn’t anything to tell you, other than it can be done, although doing so would mean you’d have to sacrifice the beautiful 3D effects. The slider pad however does a very good job for controlling the Karts, and when compared to the DS version of Mario, Kart which used the d-pad, is far better. The controls are very responsive and very easy to pick up, as they always have been for the Mario Kart games, which is a testament to Nintendo’s ability to make even games with fun for everyone in mind.

Nintendo have focused a lot on the 3D screen of the 3DS when compared to the touch screen, and sadly this is the case again. The touch screen has exactly the same functionality as the DS version of Mario Kart; a map. The map is very handy to have if someone uses the ink power up, but generally is neglected for the most part.

There are a few additions to the list of power ups available in Mario Kart 7. As well as the usual favorites, the fire flower has been added, along with a power up that turns you in to metal, although from the short time I had with the demo, I didn’t get to see them.

Mario Kart 7 is shaping up to be a must-have this Christmas, and I can see it easily taking the number one spot in the top ten, provided it isn’t met with another behemoth of the gaming world on its release date.

Super Mario 3D Land:
Nintendo sure want to sell shift some consoles this Christmas don’t they? Conveniently, not one, but two Mario games are being released for the 3DS this side of the holiday season, which most likely can be attributed to the slow 3DS sales between launch and the recent price drop.

Nevertheless, Nintendo clearly want to maintain their history of high handheld sales. The one character that has been a staple for Nintendo, achieving domination of the handheld market is Mario, so why not bring him out again, you know, just in case there was any chance that Nintendo staff haven’t achieved their Christmas bonus this year?

It has been stated by Nintendo that Super Mario 3D Land is less like the 3D Mario games, such as Super Mario 64, and more like the original side-scrollers from our childhoods. Whether this is actually true, or that the game just takes place at more of a side on view remains to be seen, as in the levels I played today it felt exactly like Super Mario 64. This isn’t a bad thing, as it is without question a brilliant game, but to claim it is more of a side-scroller when it seemingly isn’t is rather confusing.

This won’t be an issue for most consumers, and won’t be for me either, since if there is one game that Nintendo know, and can do well, it’s Mario, and Super Mario 3D Land looks to fit the trend. This game is one of a few that swayed me to buy a 3DS (as well as that juicy price drop, of course) and I’m glad that it didn’t disappoint today.

I was able to play two levels out of the available four before being ushered on, which is a shame as the two levels I played were fairly short. The first level was very reminiscent of every first world in Mario, with a grassy, basic layout with a few Goombas and a couple of drops that might catch you off guard if you weren’t actually looking at the screen. The level design showed off the 3D fairly well and it quickly became apparent that Nintendo will be creating more levels that use the ability to see the depth of the terrain, with levels that go back into the screen rather than across it.

The second level used both perspectives, by having some of the action take place at the back of the level, while playing like a side-scroller. The design was much like the underground levels from previous Super Mario Games, although the piranha plants that you’d usually expect to see have been  replaced by plants that shoot ink at the top screen. Conveniently, they do that just before you have to traverse an area while avoiding giant, swinging spiked balls. How fiendish of you Nintendo…

The touch screen is utilised subtly, as you can store a power up on the bottom screen for later use in-game, just by tapping the icon on the lower screen. Aside from holding a power up for you, it wasn’t obvious that there were any other uses for the touch screen. Speaking of power ups, the two levels I played included two old favorites in the fire flower and the raccoon suit. There were people queuing behind me to play, meaning they cut my time short before I could explore the content in the third and fourth levels.

A really nice touch is that Nintendo have included a throwback to some of the first Mario games, where at the end of every level, there is a set of steps and a flag pole. In super Mario Land, you can even bag yourself a 1-Up if you manage to grab the top of the flag pole. This little hint of the past is likely to be a subtle hint at the game being perceived as a side-scroller, although I’m not sure newer fans will appreciate it as much.

Much like in Mario Kart, if any gyroscopic controls existed, they weren’t mentioned, as that would mean sacrificing the 3D, and this would have a massive effect on the way the game looks, in my opinion. This is a game made to be played in 3D, and it would be a shame to lose such a big part of what makes the game so different from previous Mario games just for some motion controls, and motion controls really aren’t necessary for Super Mario 3D Land, as the slider pad does an excellent job. It is responsive to every command and very simple to use, especially if you have journeyed with Mario through any of his previous 3D outings.

If this is your first Mario game, don’t expect to be bogged down with a confusing control scheme; this is one of the simplest, yet best games I’ve had my hands on all year. It looks and plays beautifully, just as you’d expect it to, and will most certainly appeal to even the most “hardcore” of gamers (the ones that feel compelled to collect every star coin) when it is released later this year.