One of the unexpected games we came across at the Eurogamer Expo was Bethesda’s latest piece of work; Rogue Warrior. Based on the life of a veteran Navy Seal Richard Marcinko (voiced by Mickey Rourke) and set in North Korea I was eager to get my hands on the preview build. As it happens, I did, so follow me if you want to read more.

The game is set-up as a stealth shooter, but enables you to play how you like and chop and change when the feeling takes you. Set in a first-person view and switching to third person view when gripping cover and doing stealth kills, the game was something of a mixed bag.

When first starting the level it basically teaches you how to play the game. This is relatively simple and the controls are very much like COD. While following the on-screen prompts for the stealth kills, I did find the game rather brutal and over the top. It is deeply satisfying to watch your character take out an enemy by slicing his throat or smashing his face into a window sill, but if Bethesda are depicting a real person then that person must be off his rocker.

The shooting mechanic seems decent enough but is lacking in recoil when using assault weapons. There was a selection of weapons in the game mainly consisting of assault rifles, which all act differently in terms of accuracy, but without recoil it seemed to matter little. 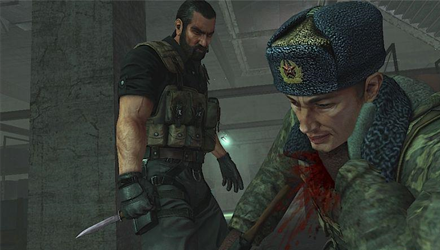 For me, the controls felt very heavy; like I always had something pushing against me when I was looking around. This changed when I came up to an enemy and it seemed like the weight had been lifted and I spun around suddenly despite exerting the same force. In the areas that you had to use the night vision goggles it felt like a pointless inclusion, as even in the dark you could see fairly clearly, but that was possibly due to the screen I was playing on. The level design was pretty linear but seemed to work well and played a lot like your typical corridor shooter. I must mention that the tightness of the hallways gave the game a somewhat claustrophobic atmosphere.

Also heavily noticeable was a very consistently choppy frame-rate. At no point in the demonstration did it ever seem to remain at a solid level, but should be something that will hopefully be fixed when the game gets optimised.

I think with a bit more time and an overhaul of the game mechanics this could be a fun, gritty game. Bethesda do have a long line of successful games and this could be another one done right, but from the demo we received the game could use a bit more work, despite the representative telling us it was close to completion. That said, I would very much like to see how the finished article turns out.