Jade headed to Eurogamer Expo to catch up with Mike Bithell (the developer behind smash-hit Thomas Was Alone), to discuss his new game Volume, the effect of indie gaming on the industry, and working with Sony.

Q. I’ve really enjoyed playing Volume this morning. I don’t normally play a lot of stealth games, but with Volume I found that there were a lot of puzzle elements that intrigued me. I can envisage myself spending a lot of time with it, thinking “I’m not going to let it beat me!” Have you had a lot of that sort of reaction? 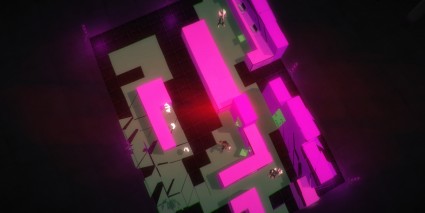 “I never thought of it as an accesible stealth game but it seems that that’s happening which is great.”

Q. I normally find that I have a few attempts at stealth, then when it doesn’t go to plan I get annoyed and rush it. There’s a bit in The Last of Us where you’re in a sewer and I just ran for it. I tried that tactic with Volume and quickly realised that isn’t going to work, and in a good way. You have to think about what you’re doing.

“Yeah, and we don’t have clickers either!”

Q .I read you’ve been developing Volume since you were 15, were there any games you played at that age that inspired you to make it?

“The big one for me was Metal Gear Solid 2, I was obsessed with it. I didn’t start developing Volume, but I started thinking about it and went off and worked in games for years, but I always had in the back of my head the idea for a stealth game. It’s cool, it seems to have come together. I was really into Metal Gear Solid 2, and then I’ve played every stealth game since; Hitman, Thief, Deus Ex even, all these different games, then every time I found something I liked I’d be like “Ooh, I’ll use that.. That can be something I’ll use” and it all gets piled up. That’s what Volume is, it’s me grabbing all the cool bits from stealth games I like.”

Q. Do you feel Volume has changed a lot from your original vision?

“Yeah, it has. It’s evolved. It’s more my nostalgic view of the games I played as a 15-year-old. It doesn’t really match. It doesn’t play like Metal Gear Solid, it looks like it, but doesn’t play like it. It plays like how I remember Metal Gear Solid. As things have been piled on it’s shifted and twisted and changed, and things like the story have adjusted over time. It’s changed a lot.”

Q. Speaking of the story then, it’s from the lore of Robin Hood. Is that something you’ve always been interested in?

“So I started researching, and obviously one of things you come to very quickly with research is Robin Hood and I read like, three books about Robin Hood and I realised I didn’t want to just nick some ideas from it, I actually wanted to do a Robin Hood game. The cool thing about Robin Hood is it’s always being retold, tweaked and changed by various people – Doctor Who most recently – and that’s exciting. It’s exciting what the different versions of it do to the story.”

“How do you make a likeable thief?”

Q. How have you found the leap for developing for next-gen?

“Honestly, the nuts and bolts of how a game works hasn’t changed that much. In terms of making a character walking round on a screen, that’s the same process on PS4 as on PS3, PC or Xbox. The shift is in the graphical side. It’s all about learning to make shaders, to make it look good enough for those consoles and really feeling that out and getting a good knowledge of it. It’s about bringing the art team who have produced all the meshes, the artwork and the textures and all the animation to make it look cool.”

“It’s been an interesting one, but it’s been achievable. This console transition has been pretty steady, the architecture of PS4 and Xbox One is kind of like PCs, very easy to develop for and it’s really just a bit more power.”

Q. Have you brought a lot of the same team over from Thomas Was Alone?

“Everyone who worked on Thomas Was Alone works on Volume now. The composer was David who did the music for Thomas, he’s also doing the music for Volume which you will have heard when you played earlier. Danny Wallace who did the voice-over for Thomas Was Alone is now a character in Volume; there’s a lot of other actors, but Danny is back. Even the guy who came up with the colour palettes for Thomas Was Alone, he is the concept artist for Volume. It’s like we brought the whole family across, and now we have a lot of new people. There’s about twenty people working on the game, so it’s cool and exciting. The family is expanding.”

Q. Is everyone really excited after the success of Thomas Was Alone?

“There’s a good energy, because we all really want to make it so Thomas Was Alone wasn’t a fluke and we want to prove that we can do this again and make something cool that’s completely different. It would have been easy to do a sequel and make some more money and ride the wave a bit. Volume is something that’s completely different that we can have fun with, try some different stuff out and stretch our skills and hopefully expand our audience.”

Q. Were you surprised at the success of Thomas Was Alone?

“Yeah, totally. I don’t think anyone expects to be as successful as that game was. The three expectations of the game were that either I could make enough money that I could buy an iPad, or enough that me and my girlfriend could go on holiday, or enough that I’d have a years salary and I could quit my job and try something else. It far exceeded all of those guesses, and it went crazy big. Now it’s onto the next thing, and see how this one goes.”

Q. Is that your attitude, see how this one goes and then start planning for the next thing?

“Yeah. We’re quite conservative. Thomas Was Alone made enough money, so that if Volume sells no copies we still get to make another game. We have the money, we’re not banking it all on one game. We’ll see. No creative in history has ever had a perfect run. Everyone has that awful album that sucked, or that terrible movie the director put out. There’s always been that, so we’re trying to plan around that. We’re not going to expect it to do amazingly – we hope it will, obviously, but our jobs aren’t on the line.”

Q. Have you got anything in the pipeline for the next game?

“Yes. We have plans, we started doing some concept art for the next game. We’re not ready to talk about that. That one will be, hopefully, bigger and better. We’ve got some cool ideas.”

Q. The way I see it is that Thomas Was Alone was blocks, Volume is people. Will the next thing follow that evolution?

“We’ll see. We’re hoping so. We’re hoping to keep things pushing forward and keep coming up with cool stuff, and keep growing. If that works, great, if it doesn’t maybe we’ll go back and make some small games. We’ll see how things go, go with the flow a bit.”

Q. So, what I want to know is, with Thomas Was Alone, how did you make me care so much about a little block? I was so invested.

“It’s interesting, it’s a thing a lot of people say about Thomas Was Alone. It’s nothing to do with my game, it’s because you’re a compassionate person. We’re all designed to care, and if we have anything we can attach to and have an emotional reaction to, we will. All I did was put a rectangle on the screen and give it some story, and you brought the emotion. That’s what’s really cool about Thomas Was Alone, I did very little, and because all human beings are basically awesome, you all brought the emotion and I benefited from it.”

Q. I think as well, Danny Wallace has a really evocative voice.

“He’s amazing. He’s so funny. I had to get him back. We were doing press for Thomas Was Alone and we went to the pub after and we sat and talked about Volume, and what I was going to do, and the story and the script, and agreed there and then that he’d be in it.”

Q. So, it’s a big time for indie gaming at the moment. How do you feel that’s benefiting the industry as a whole?

“I think indie gaming is a really good test bed, and a place to experiment with ideas, see what works and what doesn’t work, and take big risks and I think that enriches video-games in general. You only have to look at something like Minecraft and see how big an influence that game’s had. There were lots of games that came out that year that didn’t have as big an influence, but because we were all experimenting cool stuff happened that changed the games industry. It’s a Wild West of experimentation and that’s something we should encourage.” 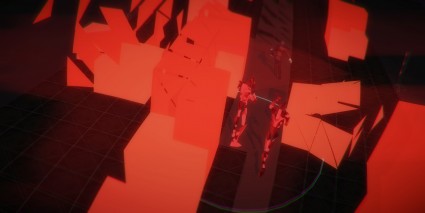 “Indie gaming is a Wild West of experimentation, and I think that’s something we should encourage.”

“They’re just really cool guys, I like the Sony guys. We worked together on Thomas Was Alone on Vita and PS3, and PS4 we’ve just announced. They’re really nice to work with, so when Volume was at a stage where we were ready to start talking to people about it and had a prototype, I went to Sony’s office showed it to some of their guys and we started chatting about what would happen with it and that’s where things went. They’ve been really supportive and awesome, and they’ve had my back on many occasions and as a result of our relationship they do a lot to help with promoting and getting the word out.”

Q. Apart from Volume, have you experienced any games this weekend that you’re looking forward to?

“Induction is very cool, in the Left Field Collection. That’s made by a guy I used to work with called Bryan Gale. That’s a really cool little game. Honestly, I’ve not got to play many things, but what I love about this show is the amount of variety. We have the big massive Destiny bit, and all the indie games. There’s more indie games here than there have ever been before, there’s a lot of that type of game out there and that’s cool, that excites me.”

Q. Do you get much time for “non-work” gaming at home?

“I do, I tend to play a lot of AAA games. Very recently I’ve been playing Deadpool, because everyone’s talking about the movie so I went back and played the game that came out from High Noon a little while ago. I’ve been playing Destiny, obviously, like everyone. I’m doing okay, I’m only a level 9, I’ve not had that much time. I play AAA mainly, and cool indie stuff; Gang Beasts I’ve been playing a lot of, I like a lot.”