Bungie’s first game since leaving the Microsoft family has just left the beta stage, heralding the emergence of an IP from them that isn’t Halo. With such a huge event in their history, Jonn takes a look back at what shaped the studio in this two-part retrospective.

There can’t be many next-gen console owners that haven’t heard of Destiny, the first game from the house of Halo since their decision to leave Microsoft and, this time, PlayStation owners get to enjoy their hard work too. Whilst Halo may be the first thing you think of when you hear the name Bungie, the studio has had a long and rich life before that property even existed. 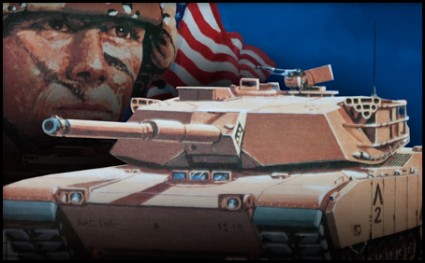 Bungie started way back in May 1991, when Alex Seropian decided to publish his game Operation: Desert Storm. He pulled in fellow student Jason Jones and they took the rather maverick step of publishing it on the Apple Macintosh. At this time, the platform of choice was the PC but both Alex and Jason had been bought up with the Apple systems, so they developed for what they knew.

The game itself was a top-down tank shooter, the player taking part in the war in the Middle East, which was on going at the time of development, and the final boss was a giant version of Saddam Hussein’s head. It was a moderate success, selling 2500 copies and this convinced Seropian and Jones to continue and release a game that Jones had been working on before he joined Bungie; Minotaur. 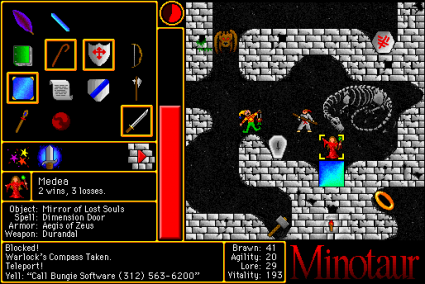 Minotaur was another top down game, this time a dungeon crawler. It was a simple maze game where the player had to track down and destroy the other denizens, but it added a revolutionary touch.  Minotaur was one of the first, possibly the first, game to require a network to play. The people you were killing in the game were people you knew. While the game was, again, only a moderate success (matching the 2500 units of Desert Storm) it created waves in the gaming world and began the near religious following that Bungie enjoys today.

The world was moving on, however, and 2D games were no longer enough. Bungie had to move with the times and so in 1993 they released Pathways into Darkness, a game that was effectively Minotaur in 3D.

Pathways entered the market on the back of Apple’s decision to move to a RISC based platform for its machines. This gave Bungie an incredible amount of power compared to the previous generation and allowed them to produce a game that just blew everything else out of the water.

Realising they couldn’t do everything on their own this time, they roped in a friend, Colin Brent, to create the graphics.

Pathways into Darkness was a major hit, both critically and commercially, and allowed Seropian and Jones to get a proper office and hire full time staff. The blend of first person shooter, RPG and survival horror hit a chord with everyone who played it. It also represented the beginning of the Bungie Mythos, the self-created history that ties all their games together.

Bungie had got the attention of the world but they needed to capitalise on it and so their next game had to hit hard, and it did. 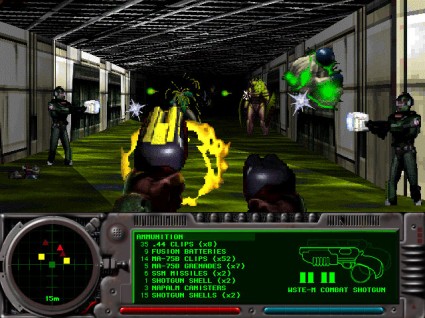 Ask a long term Mac gamer what the best game ever released for the Mac was and there’s a pretty good chance they’ll say Marathon. Bungie took everything they’d learned from Pathways and created what is possibly one of the finest first person shooters ever.

Marathon started life as a sequel to Pathways but everything was written from scratch. The game itself was set in the distant future aboard the UESC Marathon – a star ship that had been attacked and boarded by an alien slaver race.

It boasted full 3D movement, including the ability to look up and down, something the big PC 3D game of the time, Doom, wasn’t able to achieve (although Bungie had only managed it as a graphical trick). The graphics and sound were vastly improved from Pathways and the network play – a core component of a Bungie game – was stronger than ever.

Marathon was a huge success but Bungie didn’t stop there. A year later, in 1995, they released Marathon 2: Durandal. The sequel wasn’t just a quick paint job; it featured a larger storyline, better graphics and a vastly improved network experience that included the game types that would become typical of a Bungie title: Tag, King of the Hill, and Kill the Man With the Ball.

Marathon 2 also had a couple of revolutionary aspects, one for the industry and one for Bungie itself. For one, it allowed two players to take part in the single-player campaign together, a revolutionary step for the time. Secondly, it was the first Bungie game to be released on the PC, a Windows 95 version shipping a little while after the Mac release.

Releasing on the PC helped to increase Bungie’s revenue by over 500%. This massive increase in funds allowed Bungie to expand again and they moved to a larger, better office. Bungie had made a few successful games, but they were getting bored of doing the same thing so it was time to move to yet another genre, this time Real Time Strategy. 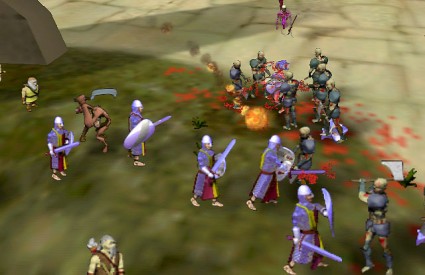 Myth: The Fallen Lords will go down in Bungie’s history as both their most loved and worst performing title ever; not because it didn’t sell many copies – it did, it sold a lot – but every bit of revenue was wiped out by one very small and expensive bug. The game itself was set in a ‘swords and magic’ world, and was the first RTS to make use of 3D graphics and featured the Bungie hallmark of a great storyline and compelling network play. Myth also featured an astounding musical score thanks to a new hire by the name of Marty O’Donnell.

Myth was set to be another huge earner for Bungie. It was completed and sent to the factory to have the discs pressed and packaged as Bungie prepared to release another great title on the world. Mere days before the release was due, disaster struck. A Japanese translator uninstalled the game only to find her machine was completely wiped clean. Bungie was forced to patch the installer, open all the film wrapped boxes and replace every disc.

This wiped out pretty much every bit of profit from what was a fantastically profitable game, but its success meant that the release of Myth 2 helped recoup much of the loss.

Bungie were making waves and releasing hit after hit, and in 1999 they showed a demo of what would be their most ambitious game yet. Crowds at Macworld were given a taste of Bungie’s triumphant return to the first-person shooter genre with a game that featured a seemingly impossible list of features, including A.I. comrades, vehicle combat and massive outdoor environments.

As was usual at Bungie, the game had been in development for long time before the announcement. In fact design had begun just after Myth, and was originally destined to be a space-based version of the RTS. Indeed, builds existed which played in a third person perspective and much more like a strategy game than a first person shooter.

How big a deal was this game? Steve Jobs himself introduced it, Bungie were the biggest developer on the Mac at the time and there was a very real sense that Bungie’s baby would provide a catalyst to get Windows PC owners to make the switch to Mac. 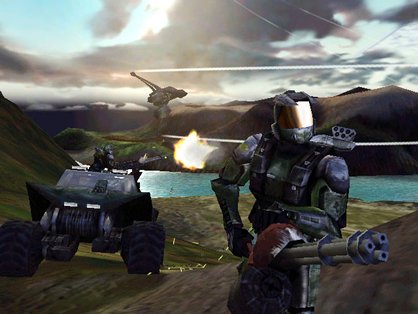 Halo could have been quite different on Mac…

On stage with Bungie was a spokesman for Take-Two Interactive, who were lined up to publish the title, but this never came to be and the Mac owners wouldn’t get their revolutionary title yet.

Bungie had impressed a lot of people with this first glimpse of their space FPS titled Halo and one of the impressed parties was ready to make them an offer they simply couldn’t refuse.

As far as everyone was concerned Bungie was a key Mac developer and Halo was the spiritual successor to Marathon. It continued the Bungie Mythos shared through the previous titles and even had the concept of a lone warrior partnered with an A.I. – the same premise as Marathon 2: Durandal. There was never any doubt that Halo would be a Mac title; if you’d asked any of Bungie’s fans at the time, the idea that Halo wouldn’t release first on the Mac would have been unimaginable…

If you want to play Marathon then you can download the free, open source and Bungie approved Aleph One engine here, where you will also find the data files for Marathon, Maration Durandal and Marathon Infinity released for free by Bungie.