Whether you love it or hate it, Assassin’s Creed has been coming and going on a yearly basis for a little while now. After the abysmal time Ubisoft had with the launch of Assassin’s Creed: Unity, it looked like the series might have started going the way of its once-beloved Desmond Miles. Alas, Ubisoft Quebec have done a pretty good job of helping pull the series back up on its feet, but sadly it’s still wobbly in some of the usual places.

Far from the romantic promenades of Paris and the waters of the Caribbean, you play as the twins Evie and Jacob Frye, who head to London from their hometown of Crawley in order to unravel the work of Crawford Starrick; an all round pompous dickhead, billionaire owner of a business empire and Grand Master of the Templars in Britain.

Their father was an assassin also, and the twins are eager to continue his work, albeit in vastly different ways. Typical twins. While Evie is busy chasing down one of the pieces of Eden that her father had been tracking, Jacob intends to build a gang called ‘The Rooks’, and take over the London streets from the Templar-led Blighters.

I like both Jacob and Evie. Both are young and confident characters in their own way and play off each other well, as you’d expect of twins. Starrick, on the other hand, is a fairly typical high-society antagonist type and not particularly memorable. The same can largely be said of the story as whole, which isn’t to say it’s bad, more that it feels like it adds up to less than the sum of its parts. There are some great mission moments, but as a whole it’s entirely predictable.

Being an Australian who is sadly yet to visit the UK, it’s easy for me to imagine old timey London as a dreary, grey-soaked bricktown you see in the odd period drama. I promise I’m mostly joking… This 1860’s London couldn’t be further from that. It’s bloody stunning. Rich textures and great lighting brings the streets to life and, working in tandem with the persistent day-night cycle and dynamic weather system, gives the city of London one of the more realistic looking facades seen in an open-world game to date.

I played through this on Xbox One, and I am still properly blown away by how good it looks. The phenomenal draw distance gives London one of the more spectacular silhouettes against the skyline when you perch yourself atop Big Ben and look out over the rooftops. The puddles on the ground seep in between the brickwork of the roads, and beautifully reflect the world as they should. Also, the costumes… Look, I’m not one to get caught up in things like costumes, but the intricate clothing worn by the main characters is simply stunning up close. The texture of the different fabrics, together with the excellent lighting, show off visual excellence perhaps more so than the city itself. They really are incredible.

The soundtrack is very much equal to the visuals in terms of quality. From classical string pieces that that range in tone from peaceful to frenetic, to some of the more cinematic orchestral scores, all composed by the unlikely pairing of Austin Wintory and Australian musical comedians, Tripod. It’s unfortunate the in-game audio is neither impressive nor awful by comparison. It’s there and it does it’s job, though it fails to join the visuals and the musical score in achieving a perfect harmony. 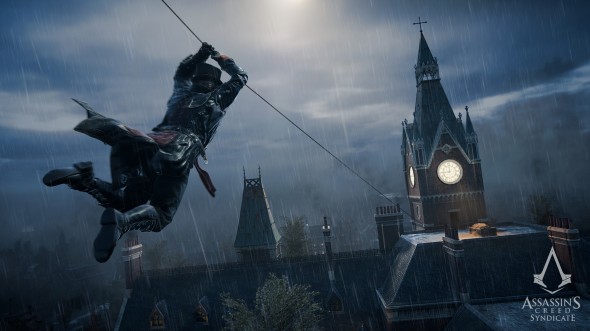 London seems to have a bit more open space than Paris did in Unity. The streets are wide for the most part, giving you room to hoon around in one of the many horse-drawn carts that can be seen doing the rounds. That extra space has meant that the terrace rooftops can often be cut off from each other at the end of the block, which is where the new grappling hook comes in. It’s not as versatile as the grappling hooks in some other games, but it’s handy and makes actions like traversing large gaps across the Thames or climbing the height of Big Ben a simple joy, pretty much taking seconds.

In the downtime between missions, walking the streets reminded me a lot of the wildly underrated action adventure game The Saboteur, mostly in the way that the Blighters wander the streets looking for trouble. More often than not, they are looking for trouble, and if they aren’t busy trying to rile you and the Rooks up, they’re holding up one of the city’s numerous NPC’s. There are plenty of chances to wreck some Blighter fools with the fast and fierce combat, and it’s crazy. The Frye twins can be savage, and some of the more cinematic multi-kills look hugely satisfying when you pull them off.

It’s certainly not all great, however, because when it goes wrong, it goes properly wrong.

As you complete missions, you gain cash and experience. As has been the case in previous Assassin’s Creed titles, you spend cash on crafting new weapons and upgrades. These can be accessed either via the train hideout that you find early in the game, or just through the in-game menu itself. Experience goes towards granting you skill points, which you spend to gain new abilities. The whole system feels a touch arbitrary if I’m honest, it doesn’t really need any of it, and ultimately feels like extra baggage that you need to sort through before you can move on.

Character level is tied heavily to both the story missions and skill progression. All the missions, be they story or side-quest, have a recommended level, which you can choose to ignore at your peril. I was able to get through a handful of missions that were at least a couple of levels higher than mine at the time, and it was the purest lesson in patience.

Movement in the Assassin’s Creed series has always been a bit up and down, if you’ll forgive the pun. After a number of attempts to perfect it, I’m not convinced it’s ever going to get to a place that feels nice and smooth. Some of the transitional animations look incredibly fluid in full motion, that is until the system notices you’re going to miss that ledge, and shifts things ever so slightly just to make sure that you visibly make contact with the surface you’re leaping at. 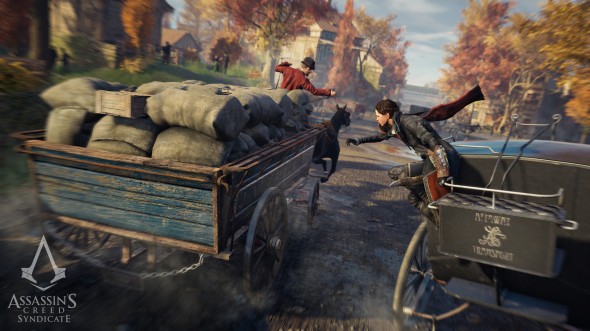 I get why it has to be this way, but it still leads to far too many finicky moments that become especially noticeable in the more time-sensitive missions. It’s way too easy to get caught on a ledge or a post, which is still incredibly frustrating. I never felt like I could comfortably rely on the system to work, so I found myself taking less risks when it came to finding routes and cutting across the rooftops. Occasionally too, I’d find myself stuck, perched on a ledge and not been able to move.

The combat is amazing when it works, and depressing when it doesn’t. My issues here are all tied to the controls which, once again, are brilliant when they work, but break just a little too frequently for it to not have any lasting effect. I have had controls become flat out unresponsive during pivotal combat moments, which is just repeatedly annoying.

Don’t get me wrong, some of these issues are funny, such as the floating kids I saw, happily running around in the air, playing as nothing is wrong, but controls that refuse to respond at any point is not good, and it happens a little too regularly.

Assassin’s Creed also feels like it’s lost its intellectual edge to some extent, in favour of simpler, collectible-based puzzles. They are more of a grind than they are enjoyable, which is a shame because some of the coolest stuff  in Syndicate is locked away behind this drudgery.

A few final points I feel it important to mention. Microtransactions make a return, allowing players to buy Helix credits, which can be used to buy things in game like in-game currency or crafting supplies, but thankfully they are kept on the periphery and aren’t shoved in your face. Also I have yet to mention the omission of multiplayer from Syndicate which is, in one way, a shame because I always felt the series attempts at multiplayer were quite unique. They always came up with some different ways to play, but leaving it out does seem to have added benefits to the open-world, and it makes sense in that respect.

CAUGHT ON THE FENCE

Assassin’s Creed: Syndicate retains some of the issues that have held me back from adoring the series as much as others do. The story never stretches its legs, largely as it’s tied to an overarching narrative that, at this point, I couldn’t give a shit about. The controls still manage to err more on the side of annoying than enjoyable, and it really breaks the momentum of gameplay and fluidity of the animation.

In saying that, it also does many things very well, and those aspects stop it from losing its grip on the ledge entirely. Satisfying combat, incredible visuals and music, and an amazing setting make Assassin’s Creed: Syndicate worth looking at, just be prepared for a little frustration.