The premise behind Bedlam is intriguing. Taking its cue from a book that itself is a love letter to gaming history, the game is an first person shooter that jumps around a few genres. Unfortunately, this grand idea is let down by some very poor execution.

Based on the book by Christopher Brookmyre, Bedlam follows the story of a programmer who suddenly finds herself transported to a virtual world. At this point, people of a certain generation will be thinking of Tron, or maybe The Lawnmower Man, and yes, there are some definite cross-over ideas, but Bedlam takes those ideas far further and attaches them to the gaming world far better.

A lot has been made of the story and for good cause. The book that Bedlam is based on is a genuinely good read and it’s great that Christopher didn’t just port it wholesale to the game. The changes made, such as the switch-up of protagonist, definitely fits well and the humour is brilliant first time around. 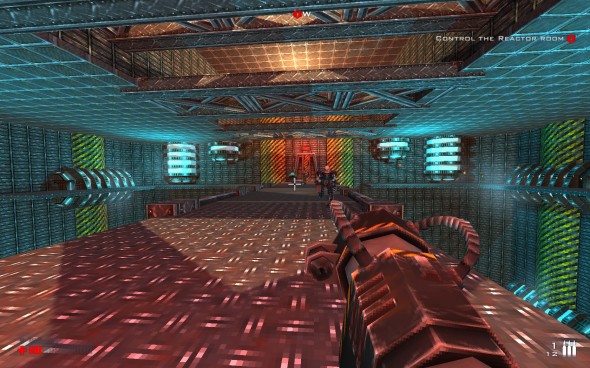 Quaking in my boots…

The protagonist in the book was an emotionally charged Scottish programmer called Ross Baker. For the game, however, the story has been reworked so you play as Heather Quinn, another programmer working at the same company; a slightly sinister medical conglomerate called Neurosphere. They haven’t just replaced Baker, though, and he still exists in this game world, but the change-up is welcome, it gives Bedlam a different perspective from the book.

For the most part, the writers have created a believable and strong female character, and Heather is voiced by Scottish actress Kirsty Strain, so the accent is also nice and believable. Throughout the game, she throws out quips which humanise her pretty well, and the script also allows for a lot of fourth wall moments that increase the immersion.

Unfortunately, countering that, the rest of the voice-acting is terrible; when the characters say their lines you can pretty much picture them reading from the script and, due to the horrible checkpoint system, you’ll hear the same jokes again and again.

The opening scenes show Heather being scanned by a new Neurosphere device. Set in a white room, you see 3D objects pop-up and disappear, then suddenly she appears in a strange alien world. This world, we find out, is a 90s shooter called Starfire and, from then on, we follow constant mission markers as we attempt to find a way to escape and save the world of Bedlam from an evil incursion.

Early on, Heather decides to use the name ‘Athena’ (a call back to the book where Baker decides to use the titular name ‘Bedlam’, a hangup from his gaming days). It’s not really explained why she refrains from using her real name in the game, especially since she’s talking to a virtual human at the time, but it’s another link to gaming culture and doesn’t feel too forced.

And linking to gaming culture is what Bedlam is all about. As Heather moves through the game world, she’ll jump into different video-games, and mostly this involves different styles of FPS, including Quake, CoD and Halo. You’ll also play homages to Pac-Man and Space Invaders; albeit the Pac-Man segments are just an FPS played inside a re-imagined Pac-Man maze.

Unfortunately, the core FPS gameplay is just not very good. The movement feels both floaty and sluggish – which is a hell of a trick to pull off, I’ll give them that – and the times I died were mostly due to getting caught on bits of scenery than anything else. That’s not the end of it; there are clipping issues galore, numerous bugs and the frame-rate is incredibly variable. The graphics, while certainly charming as you go through the ages, only ever get to passable at their best.

The level layouts are quite basic, as befits a game that is largely based on older FPS titles, and they’re suitably reminiscent of the games they’re aping. The first game, Starfire, looks quite a lot like Quake and has the similar constrained style to its game-type. At the far end, PlanetFire shares the more open feel of its parent, Halo.

Other than that, the levels are pretty much standard FPS fodder – they don’t get very complicated or that impressive, but you could argue that they suit their purpose. The one standout is the Pac-Man level; despite being one of the most flat levels, it certainly adds something to the generic FPS gameplay. I’d go as far to say that I’d happily play an indie game that mixed Pac-Man and first person shooting in this way. 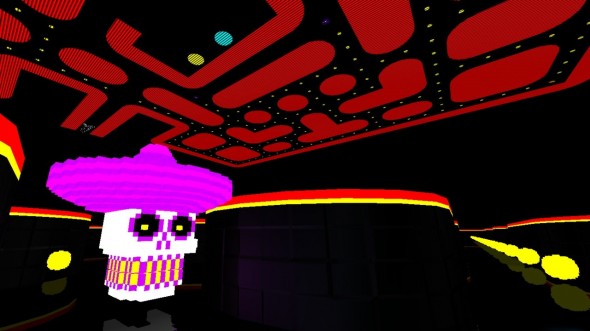 Pinky, is that you?

The A.I. is outright bad. In theory, as the game progresses, you’d expect the enemy abilities to improve but they really don’t, at least not noticeably. The first game’s enemies are bullet fodder that run at you shooting, pretty much dead-on what you’d expect in a Quake era game. When you progress to the Halo-styled PlanetFire, you’d expect – or hope – that the enemies would use cover and move around more, but they never do. There might be a little more lateral movement, but it really doesn’t make much difference.

Their animation is also not brilliant; the death animations look not too dissimilar from the Quake animations. Even in the later, more visually impressive levels.

With each change of style you get a sample of weapons from the game being mimicked, but you also get to take some of what you’re already carrying with you. It is pretty cool to run around CoD-style arenas, shooting Nazis with a plasma gun. All in all, there aren’t a great many weapons, but they aren’t terrible and there’s a fair mix. The biggest problem is with aiming the damn things; the controls tend to throw the crosshair around with no real accuracy. This is pretty key, especially with slow weapons like the Shotgun.

Bedlam is a single-player only affair, and that’s a shame because playing some of the levels in multiplayer could have been a real blast, especially the Pac-Man one. The story is pretty strong, though, so even with its flaws I can see that the developers really put everything into a compelling solo game. A few multiplayer modes may have taken some of the spotlight away from the issues in the main game, though, but it wouldn’t have made a huge difference, but maybe it would have helped?

In the end, Bedlam is a great idea that’s been saddled with incredibly poor implementation. If they were to try this again, but with a more experienced studio, then it’s entirely possible this could be far more essential. As it is, though, Bedlam is one of the most frustrating games I’ve played in a long time and whilst other games can be brilliant and frustrating – such as Dark Souls – they tend to also have that ‘maybe I’ll just give it another try’ feel. Bedlam doesn’t, and has caused me to rage quit more than any game in a long time.

Still, Bedlam is definitely an interesting idea. Playing in a variety of environments sounds like a lot of fun, but ultimately none of it feels as good as the games it’s mimicking. There was never a feeling that I would rather be playing the Bedlam version of a game and, add that to the overly-frustrating gameplay, and it becomes very hard to recommend.