In the real world, the Formula 1 paddock is currently on its summer break with the teams and drivers all enjoying a well-deserved rest. The rest of us, meanwhile, are left wandering the landscape looking for ways to get our F1 fix. Is F1 2015 the best way to get that fix? Well… yes, but that’s also like describing Pastor Maldonado as a Grand Prix winner, which in fairness he is. But he’s still Pastor Maldonado.

For starters, F1 2015 is easily the best-looking F1 game ever made, but in saying that, it’s still not quite as visually thrilling as I’d like. There are a few framerate drops, the odd texture pop-in, and I’ve also seen a few odd visual artifacts on a number of tracks. Codemasters’ liberal use of post-processing effects doesn’t help either, giving everything that slightly washed-out veneer.

Some tracks appear considerably blander than others in terms of track-side activity, but a lot of that stems from the nature of the tracks themselves. Singapore and Monaco, for instance, will always be more visually interesting than Malaysia purely due to the tracks location, but nonetheless, all of the tracks are pretty well represented.

The car models are every bit as detailed and complex in nature as their real-life counterparts, as you’d expect. It’s a shame that visual fidelity doesn’t translate across to the damage model, which looks to have been lifted straight out of previous generation F1 games. Collisions can look spectacular, but the cars themselves are still just as likely to look brand-new after a big incident as they are to lose a few wing pieces. When you consider just how incredible the damage systems in previous Codemasters games have been, this feels like a real step backwards in an area that really could use some next-generation love to lift it out of the past. 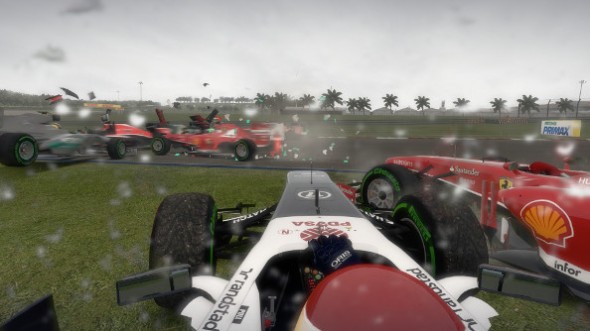 Brutal crash… but how much will it actually damage the vehicle?

The damage model is actually a great metaphor for the game as whole, if I’m honest. There are so many parts of F1 2015 that feel like they were compromised, and a lot of that feeling stems from the mysterious lack of features that have been F1 stalwarts for years. Career mode is gone, meaning no more creating your own driver and guiding them through a number of seasons with different teams. Also gone is split-screen racing and the online co-operative championship.

What you can do is drive in a full championship season, against AI, as your favourite driver, as well as take part in exhibition races, or run simple time trials if challenging the leaderboards is your kind of thing. Also included is the entire 2014 season, meaning you can drive as Fernando Alonso in a Ferrari or the late Jules Bianchi in his Marussia if you so wish, and you can also race the ill-fated German Grand Prix which ran in 2014 but was cancelled in 2015.

Multiplayer is largely confined to a series of hoppers which each have a different, rotating event roster. If I’m honest, the whole thing appears clumsily put-together and a little confusing at first. It’s either not working very well or is already a ghost town, because try as I may, I never managed to find an online race that was outside the confines of a privately organised league. It is possible to start your own custom lobbies as well, but these are confined to friends only – though you can pad the field out with AI if you wish too.

Probably the most disappointing aspect is the number of technical issues that I’ve seen, even after a couple of patches’ worth of updates. In my last race, a 70-lap, wet-dry-wet affair, no more than four of the 20 drivers managed to pit for wet tyres despite rain beginning to fall in absolutely biblical proportions. Whilst resulting in an exciting race from my perspective – the culminating accidents took out three cars in front of me – there is no way, on any plane of existence, anywhere, that this would actually happen in real life. 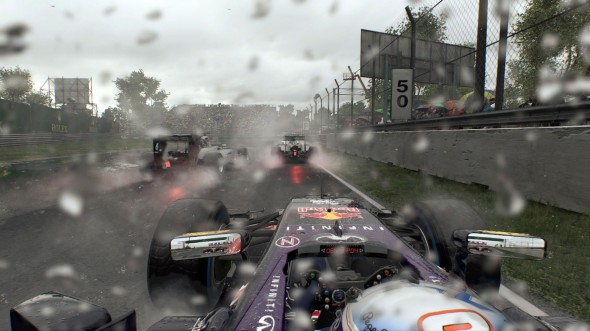 You should probably change those tyres, y’know…

I’ve got quite a list of problems I have with F1 2015, and it’s not exactly small. Here’s a sample: I don’t like the way the team sets you insane objectives like winning a race in a midfield car. I don’t like that the dry line is now entirely gone when the wet track is transitioning to dry. I don’t like that they don’t give you a weather forecast for the whole weekend. These are just a few of the smaller problems that I hope to see some form of improvement on for future iterations.

So you may be wondering how, after all that, I can possibly say that F1 2015 is any good? I’ll tell you right now, beginning with easily the best part of the game: the driving.

The driving engine has been rebuilt from the ground up, and perhaps that’s where a lot of the power of the new EGO 2.0 engine has been utilised, because it is by far and away the best driving experience I’ve ever felt in a licenced Formula 1 game, ever. Between the AI’s awareness and control when going wheel-to-wheel, the feel of the car, managing tyre wear and fuel use, it is inarguably the most fun I’ve had playing a Formula 1 game since Geoff Crammond’s Grand Prix 4, from all the way back in 2002.

Whilst all the expected driver assists like traction control and the dynamic racing line are available for those who want to gas-and-go, for experienced racers I recommend turning these off as this is where the handling model seriously comes alive. Unfortunately I don’t have a wheel for my Xbox One, but I had no trouble adjusting to the gamepad (except around Monaco… seriously, you need a wheel for that place), and it feels pretty great. Tight and responsive, and you can really feel the difference in each car. Driving a Mercedes or Ferrari is a like a dream when compared to driving the Manor, and that’s the way it should be. 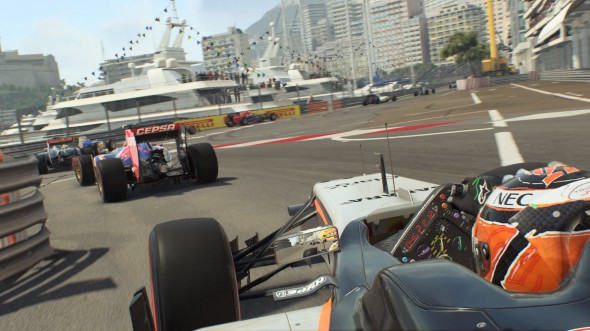 Replays have been improved so that you can now view any car on the track at any time, but sadly they lack any kind of TV-style overlay that would help add to the presentation. Where it does look great, though, is when your car is sitting in the garage and you can watch the proceeding practice or qualifying session unfold via your personal monitor. You can watch any car on-track at any time, and it will give you a stack of information about them. Their position, their split times and lap times, it’s all useful information and it adds so much to the experience.

Mid-session saves are also a godsend. It makes 50-100% distance races a possibility for those of us who don’t have as much gaming time as we used too, and it works perfectly. Something for the hardcore is Pro Seasons mode which locks you to cockpit view with no HUD or driver assists. It also turns the AI to ‘Legend’, meaning that unless you’ve got the skills to back it up, you’re going to get left behind no matter what car you drive. I tried it in a Force India and ended up racing with the Manors. Go figure.

So what does that all mean then? Should you bother with F1 2015, or is it too much to bear? In this day and age of post-release support you have to assume there will be a few more patches released to fix most of the technical issues. If you don’t have access to the internet however, leave F1 2015 alone. Left unpatched it’s a hot mess of broken features. If, like me, you’re an F1 or racing fan, the driving and the racing- arguably the core of the game – is so good that you may just be able to look past all the issues and find a solid base for the future. Granted, one that requires a lot of work, but the potential is there to see.

In many respects then, F1 2015 is a lot like the real life McLaren-Honda. The chassis itself is very good, but the engine and the rest of the package needs a serious evolution. The same can be said for F1 2015.