In terms of football games, with the exception of the excellent (and infuriating) Football Manager series, nothing really matters outside of the realms of FIFA and PES, right? As things have panned out for the past several seasons, FIFA has had the upper hand both on and off the virtual pitch. Whilst I agree largely with that sentiment, I’m not so sure that’s going to remain the case with FIFA 16. Off the pitch, FIFA is still number one with all the licences and the high-end production values that you’d expect from an EA title. On the pitch it’s a different story though, with very little change overall from last year’s entry.

First things first, I’ve never really been a fan of the way EA Sports menus have been laid out – especially in recent years –  and FIFA 16 makes no exception on that part. Although it’s not quite as cluttered as it has been in the past, most things are still slightly buried behind sub-menus that could, visually, be better represented. In stark contrast, the in-game, on-the-pitch presentation is absolutely stellar. Although both Martin Tyler and Alan Smith occasionally sound as bored as ever, there are still plenty of moments where the atmosphere builds, lifting the sense of joy that’s felt when you nail home a crucial header on the stroke of full time.

FIFA is also a great looking game in general. Player models look detailed and fairly close to real-life – more so with the superstar players of the Premier League or Liga BBVA than perhaps those of the Australian A-League, but that’s okay. Players are still hilariously expressionless when viewed up close, but the visual fluidity of their movement more than makes up for this. The stadiums all look superb both visually and in terms of scale; many of the larger stadiums tower over the teams and it provides a great sense of occasion. All of this comes back to presentation, and it’s something that EA does better than most.

That presentation is helped considerably by FIFA’s exclusive acquisition of all the big licences, including the Barclays Premier League, closing the gap between video-game and life even more. Regularly was I asked by friends if I was watching a real match when playing FIFA, and that is a real testament to its slick visual production. 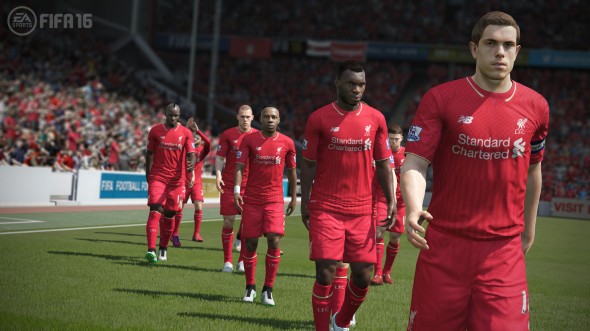 You can blame our editor for this image…

Where it really counts, however, not much has changed. Players still feel quite light and zippy, even in the lower leagues. It’s almost a bit too fast and borders on feeling weightless in a way that I don’t really enjoy. Player jostling and tackles still look great, as do all the animations in general, though again none of that is really physically represented through the controller, and it leaves things feeling just a little flat at the joypad.

EA has also added a new ‘trainer’ option, which suggests an action for the player you are controlling, and shows how to do it. It’s a change we’ve seen across the board in most EA Sports franchises this year, and I don’t feel like it’s all that useful. I get the impression that it merely suggests things the player hasn’t done before, which isn’t a great thing to do in general, but especially not with brand new players. Can you imagine encouraging a sliding tackle whilst defending inside the box? Well that happens regularly, and with FIFA‘s track record of giving out dubious penalties, you would be well advised to take it with a grain salt.

The addition of the Women’s International teams is more than welcome, and they are also great to play as. The biggest plus is that they feel different than their male counterparts. Not quite as quick, but lighter on their feet, the subtle differences between the two are a breath of fresh air in a title that does feel a touch stale. There are only twelve teams available, which is a rather small, but it’s a start and it shows what a long way the Women’s game has come since a record number of people tuned in to the FIFA Women’s World Cup final in 2015. 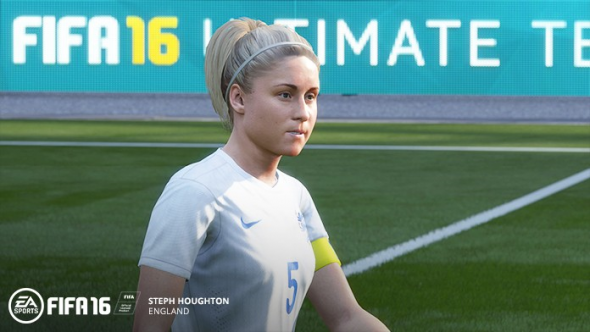 Here come the girls: A good move for FIFA.

As it has in previous titles, FIFA allows a choice of tactical or legacy defending, which I’m personally thankful for as I’ve never been able to wrap my head around tactical defending. Teammates seem fairly on point when it comes to fulfilling what’s expected of them, more often than not making the expected calls on whether to charge forward and when to hang back. I still find the player changing to be a little frustrating, with the wrong player sometimes being selected in times of urgency. It’s not unforgivable, it’s just another niggle that irks when it occasionally does happen.

Ultimate Team returns and if I’m being absolutely honest, it’s not something that’s ever really caught my interest in the past so I don’t have that much experience with it to draw from. For those who don’t know, Ultimate Team is EA’s own brand of fantasy football, and it’s pretty popular with good reason. You build your squad over time, trading players in an attempt to build a team with good chemistry, which in turn helps your team to perform at a higher level. Building a team with chemistry basically means finding players from either the same nationality or real-life team and making sure that players are in their preferred positions. You can then take that team online and participate on an online season, or just play a single player season if that’s what you prefer. It’s a clever concept, and given the swell of popularity surrounding fantasy team games recently, it’s one that probably worth looking into if that’s your kind of thing.

Online play returns in its various guises. Seasons lets you play as a club online and try to secure promotion into the higher divisions. Pro Clubs lets you and friends form a club and play online in an 11v11 match, and then there is a standard online friendly match available as well. I haven’t had any issues finding matches, and the connection has always been fairly reliable, even on my dodgy Australian internet.

We’re at a point now where Football games are so closely matched to real-life and each other, it really comes down to personal preference in a few key areas. FIFA has plenty in it for you to do, and all the real-world licences that any football fan could want. Where it lacks though is you’ll never really find a good balance between players feeling too floaty or overly lethargic.

If you want a nimbler, slightly more accessible football game then FIFA is probably more for you. If it were up to me though, I’d go the other route this year. I stress, by no means is FIFA 16 a bad game, quite the contrary; it’s very, very good and speaks volumes about the difficult choice that fans of the genre have to make this year. That said, the fact remains that – inclusion of Women’s teams aside – nothing else sets FIFA 16 out from previous FIFA titles and that makes it hard to recommend over its competitor in my eyes.