According to my Steam library, I have spent a collective 690 hours on Football Manager games since I first discovered the series back in 2008. Make no mistake though, in Football Manager terms, that’s as casual as you can be. Die-hards can put in well beyond 1000 hours of playtime – that’s per game, mind you – and you can be assured that every one of those hours will be filled with the same heart wrenching and fist pumping moments that we love about football. Despite it being a few years since I last spent heaps of my spare time with Football Manager, I not ashamed to say I’m well known in my apartment block for my over-enthusiastic reaction to a screamer from 30 yards out.

Football Manager 2016 is now available, and I’m happy to say that the folks at Sports Interactive have seemingly worked hard to keep the most ardent of fans enthusiastic, whilst not making newcomers (or those who have been away for a while) feel too overwhelmed by some of the busier, more menu-heavy areas and the depth of squad management. Football Manager 2016 sees a return to the more iterative improvements that refine this already well-defined and unrivaled series, and is a worthy update for anyone that wants to try their hand at being the next Pep Guardiola.

First and foremost, there are quite a few new features that make their series debut in Football Manager 2016. ‘Create a Team’ is touted as a new mode, though the naming convention is a touch deceptive as instead of creating a new team from scratch, you have to first select a base team to edit, and then play them in whatever competition the team you replaced was in. It’s a welcome addition, but falls short of exploring all the cool possibilities that could come from a mode like this, so hopefully they build upon it in the future.

Another new mode is the multiplayer-only ‘Fantasy Draft’, where you start with a fixed budget and attempt to build a squad from nothing, all while competing with other managers to sign the players you want during the draft round. This happens in real-time and is actually pretty rewarding. You don’t have long to create a shortlist from the player pool, and you have even less time to think once the draft actually begins. Once the squads are built, you can compete in a knockout cup, a 12 round league or a 5 round head-to-head, depending on the number of players you can find to join. Also, if you’re like me and have no friends, you can open your fantasy draft competition to anyone, which is great. Its by far one of the more interesting additions to Football Manager, and I can see this being a popular mode if you have a group of mates who all love a bit of FM action. 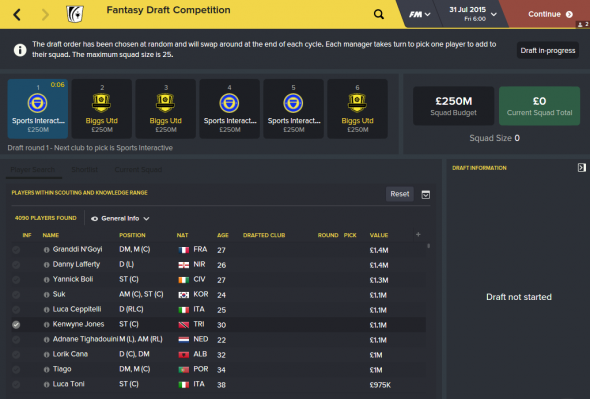 Fantasy Draft is a good laugh with mates.

‘Football Manager Classic’ returns again, this time under the guise of ‘Football Manager Touch’; and acts as a slimmed down version of Football Manager‘s standard career mode. It retains its depth of simulation whilst taking away some of the more menial managerial tasks, like dealing with press, shifting them to the periphery, allowing you to focus more on team building and enjoying watching the matches play out in the slightly improved 3D match engine. The biggest feature of this mode is the cross-platform compatibility, meaning your cloud saves from the mobile version can be played on the PC, or vice versa.

One of biggest attractions to Football Manager has always been the match engine, and how enjoyable it can be to watch your team of tiny polygons charge around the pitch. When they are playing well, it’s a spectacular sight to behold, akin to watching Barcelona in their prime. When things go wrong though, they can go wrong spectacularly. Defender errors err on the side of idiocy, to the point where screaming at my monitor was a regular occurrence.

Speaking of the match engine, visually there isn’t too much difference this time around. Any changes appear to be relatively minor, which is understandable given the sizeable alterations that FM 2015 saw in that area. You will notice a few new animations and a shift in colour palette around some of the key stats, and it adds a smoothness to the on field action, as well as helping with how you react tactically during a match. They are small but noticeable changes, and go some ways towards helping keep the screen real estate far less chaotic for me than it has been in other Football Manager titles. It’s an example of the kind of refinements Sports Interactive have made on a pretty consistent basis over the course of the series’ 23 year history. 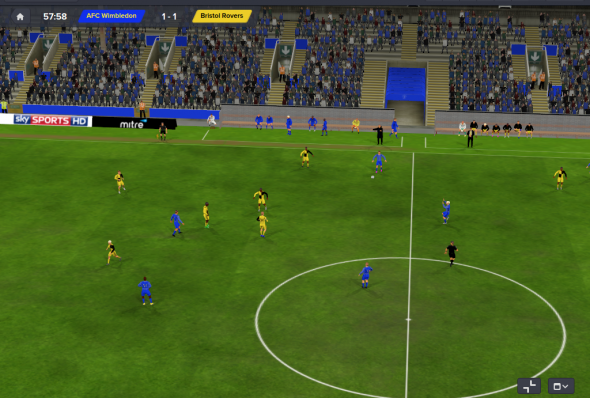 The match engine sees less changes, but worthwhile ones…

Being a particularly menu-heavy game, quite a few of the menu screens have been overhauled again, largely with the purpose of keeping things all in some kind of logical order. For the most part they succeeded, though I still find things like setting opposition instructions to be a fairly cumbersome task, lest you wish to settle for allowing your assistant to take charge of such things, which you can. Setting your staff responsibilities early on in your tenure is helpful in getting around the more routine elements of football management, allowing you to delegate some of the less (or more) important tasks to your backroom staff.

Interaction with members of the press has been tweaked a bit, making press conferences feel a bit less scripted, adding a bit more variety to the responses you can fire back. If you’re unemployed, you can now use the press to help get yourself back in the game by putting your interest in jobs out in the public arena. This is brilliant and improving year-on-year.

Match highlights have been made more accessible now, with a simple button being added to each match that displays in the results summary pages. Thanks to this, it’s now far easier to watch match highlights from other parts of the world, if that’s your thing – perfect for when you want to catch up on that World Cup Final you missed because your League 2 side was having its backside handed to them… ahem… 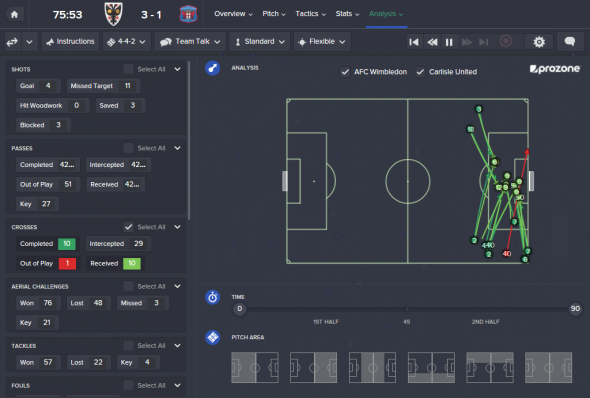 All of these minor changes have had a noticeable effect on the day-to-day running of your team; it now seems easier than ever to discover weaknesses in your squad and the cause of those weaknesses. Player performances and stats are presented in a fashion that makes man-management more enjoyable thanks to refined coaching reports, allowing you to identify the troublemakers in your squad that can bring down a team’s performances if left unchecked. It’s also easier to build tactics around your squad, with player roles and positions being highlighted in a way that’s more easily digestible.

Constructive feedback is an area that I felt the Football Manager series lacked for quite some time, and whilst it has been somewhat improved in recent years, Football Manager 2016 features the best feedback in the series to date. Scouts present their findings in a far more palatable fashion than in previous years, and assistants provide better and directly more relevant feedback about things both off and on the pitch. For me this was the single biggest stumbling block for newcomers to the series; if your team was performing poorly, and you weren’t experienced, it would often be incredibly difficult to figure out why. Now it’s no longer a problem, and this opens up some of the deeper sections of the core game for more confident exploration by beginners, and without removing anything that keeps the hardcore legions coming back for more.

After a couple of seasons with Football Manager 2016, I’m confident in saying that this is the best the series has been to date. The match engine remains the series cornerstone, somehow capturing the magic, the madness and the frustration of football perfectly, but it’s now backed up by a far more robust backend that will help you become a better manager. When things inevitably do start to take a turn south, Football Manager 2016 gives you the tools you need to figure out why. You may not have all the money you need to keep your job, but that’s just the harsh reality of the business side of football, and I wouldn’t have it any other way.