Hatsune Miku is the Japanese pop idol who is blurring the boundaries of fiction. Created using singing synthesizer software Vocaloid, Miku is a saccharine Japanese idol with her own empire; her songs have been remixed by the likes of Pharrell Williams and she’s even appeared on prime time US TV on Late Show with David Letterman. After sampling Project DIVA F 2nd, I can finally see the appeal.

Project DIVA F 2nd gives you the chance to immerse themselves in J-pop culture and play as Hatsune Miku and other Vocaloid creations. The core mode of Project DIVA F 2nd is the Rhythm Game, where you will push buttons and flick the analogue sticks in time to on-screen prompts. Other game modes include Edit Mode for customisation, and the Diva Room, which we’ll cover later.

When playing a rhythm game, it normally helps if you have some rhythm. Not being musically blessed, I found myself playing through the tutorial frequently to practice timing and hone methods. Luckily, the tutorial song “Ievan Polkka” turned out to be my favourite song in the whole game (just as well as it was often in my head for days afterwards, permeating my brain with it’s ridiculous catchiness). Fan favourites from previous Hatsune Miku games, like “Melt” are also in Project DIVA F 2nd along with brand new songs and, when combined, the soundtrack is one of the most relentlessly fun and infectious of any game out there.

Whilst the core premise of the game remains the same throughout the Rhythm Game mode, Project DIVA F 2nd manages to maintain its freshness through its diverse and varied soundtrack, from upbeat pop tunes, to more rocky entries and even some slow ballads. After a while, Hatsune Miku’s synth vocal can grate, but Project DIVA F 2nd combats this by providing alternative characters to play as for variety. 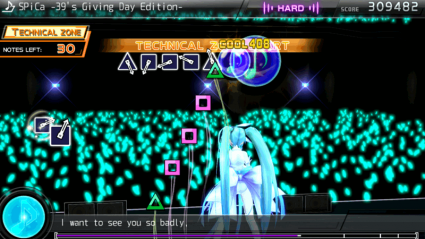 The controls are simple to grasp. On the easier modes, you only need to concern yourself with two buttons, but as the difficulty increases, so do the number of buttons introduced into each song. As long as you can focus, hitting the buttons on time shouldn’t be an issue, but the problem is keeping your focus.

Understandably, Project DIVA F 2nd poses a challenge; it wouldn’t be interesting enough to keep your attention past two or three songs. The challenge lies in ignoring the overly distracting background animations and concentrating on the button prompts that appear throughout the song. Prolonged staring and the vivid colours of the background videos does mean that before long you will be suffering from a case of Tetris Syndrome, but once you push through it, the neon colours will be burnt on your retinas and you’ll be seeing in a whole new spectrum.

For newcomers to the rhythm game genre, the normal mode will probably pose enough of a challenge. The tutorial can only go so far to teach the method, and to an extent it does tend to spoon-feed you, telling you exactly when to press the buttons. The first experience of the rhythm game outside of the tutorial can feel overwhelming; a bombardment of colour and noise, and having to focus so hard on a fixed point on the screen can be tiring. Luckily the song lengths are manageable and seem to take into consideration how draining prolonged concentration can be. It is somewhat laughable that whilst the chaos of the song is going on, lyrics are displayed at the bottom of the screen; taking your eyes off the prompts for one moment can result in failure and having to revisit the song, so just who is able to sing along while playing is a total mystery. 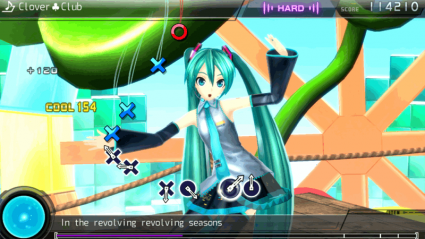 I think that for the majority of potential players, Normal mode poses enough of a threat to keep interest in the game. Even the most experienced rhythm game players will find Extreme difficulty punishing, but for those who relish the challenge it is certainly available if you dare.

Project DIVA F 2nd offers alternative game modes to prevent things from becoming stale. The Diva Room allows you to redeem in-game points for items to decorate a living space for Hatsune Miku and the other characters. Whilst in the room, you can interact with the active character and try your hand at mini-games, which will lead you to unlock special cut-scenes.

The Diva Room is much more of an addition for fans of Hatsune Miku rather than for fans of rhythm games, and seems to be a mode for developing Hatsune Miku’s appeal as a character rather than adding anything to the core game. There’s also an edit mode where you can create your own music videos for Hatsune and co., which again, only feels like it adds to enjoyment of the characters rather than giving any significant bolstering to the experience as a whole. 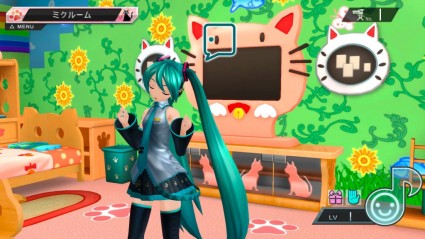 Full of catchy tunes, Project DIVA F 2nd is basic enough to be a good entry into rhythm games for newcomers, as well as giving experienced players a challenge. Not for those who are short on patience, the game rewards those who are able to persevere, learn from their mistakes and I defy anyone to be able to pick it up and give a perfect run through on their first attempt, but that’s its beauty. Project DIVA F 2nd never feels restrictive, and failing a song doesn’t feel like a punishment, rather an opportunity to prove yourself. There’s more a feeling of “I know I can do this“, rather than “I’m terrible at this” as you push to complete each song.

Project DIVA F 2nd is a fine example of why rhythm games are so popular and have such a dedicated following. Fun, easy to grasp and addictive, it will stay with me for a long while to come, most likely thanks to its songs. Project DIVA F 2nd will hopefully convert newcomers to the nuances of the genre, and is a must-play for all fans, new and old.