Review: The Legend of Vraz

Indie titles always interest me; it’s all the hard work that goes into making them from developers trying to make a name for themselves. With these games you tend to find that games go one of two ways. You either play a game that is well produced and well put together or you get something like the massage game on XBL: Indie Arcade, that isn’t really a game.

The other day I was given a copy of Legend of Vraz, an indie title from Indian company Zatun Games. This retro style platform game for the PC had me intrigued from the off with its unique style and classic gameplay.

Developed using Microsoft’s XNA Game Studio and already being well received; I had to find out what all the fuss was about.

Once upon a time in the Kingdom of Thor
Set in the kingdom of Thor a seventeen year old Prince named Vraz sets off to win the heart of the Princess Avi. In order to do so, he has to prove to her father that he is worthy, by completing five tasks. The King’s Vizier also plans to marry the Princess and is hellbent on stopping Vraz from completing his goal. Vraz sets off unaware that the tasks will be a lot more difficult than anticipated.

The story is kept to a minimum and the main emphasis is on the gameplay, like the games of yesteryear.

Starting a quest
Legend of Vraz is a 2D side scrolling platform game. As you navigate through the levels you will come across enemies that you will have to defeat, as well as having to collect gold to present to the King.

You control Vraz by either using the mouse, the keyboard or a bit of both. As you scroll through the levels you encounter enemies which you can destroy by jumping on their heads, or shooting them your bow and arrow. There are five different arrow heads, each with different attacks. The controls don’t take long to get used to, and anyone familiar with gaming on the likes of the Amiga will find them easy to grasp. Unfortunately at this time there is no gamepad support, but overall this doesn’t affect the gameplay and could be added at a later date.

At the beginning of each level you are presented with a task; this may be collecting loads of gold or defeating a set number of enemies. Each level is well designed with the enemies at set areas, like you would find in Mario or Sonic. You also have secret areas to find at certain points in the game. At certain points in the level you hit a checkpoint meaning if you die you won’t have to go all the way back to the beginning. Also when you are injured you can eat apples or you can find medicines to heal you a little. Arrows are collected as from quiffs scattered about the level. 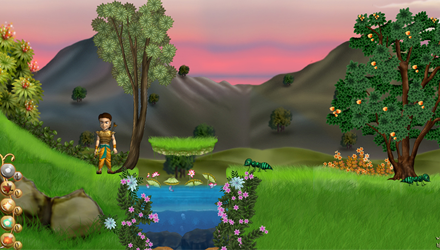 Indian Hand Painting
The look of the game uses Indian miniature painting which makes it unique in style. Each character, enemy and backdrop is hand painted and well presented. All the backdrops are animated, with things happening all the time. Each of the four areas has their own designs presenting their own individuality.

Enter the Sitar
A lot of the music in the background is composed with a flute and sitar and adds to the atmosphere. It changes depending on your location too and after a while, can be rather relaxing and a nice addition to keeping with the Indian theme.

End of a Journey, Start of the Legend
Legend of Vraz brings back classic gameplay, with a modern graphic style and incorporates that with Indian culture, to bring one of the nicest looking games from an independent developer. I will agree that it may not be for everyone and if you’re all looking for a fast paced shooter then you need to look away. If you are a fan of platform games then you will not be disappointed. The game will run on practically any PC or laptop so if you like to have something to play on the move then I would highly recommend.

To download the demo or purchase the full game go to www.zatungames.com