With next generation consoles finally out and so much emphasis on something that’s new and ‘more High-Def’, it’s very easy to overlook the cross-generational games, and this is something I’m guilty of myself. It’s very easy to dismiss games that cross the generational gap as being a bit rubbish purely by association; Tony Hawks: American Wasteland immediately springs to mind.

Breaking this paradigm however is one of my old favourites. Traveller’s Tales’ LEGO series has grown from strength to strength in recent years, taking on franchises like Star Wars, I’ll openly admit that when playing some of the more recent LEGO games, such as LEGO Batman 2: DC Super Heroes, I was becoming a bit put off, almost starting to feel that that the franchise was losing some of its magic and razzle dazzle. Fortunately, despite its innate flaws, LEGO Marvel Super Heroes has come along and reminded me that the LEGO games are still well worth a look, and on this quality I hope they’re still with us for a while to come.

My main issues with the LEGO games aren’t usually game specific; they can be applied to any of the entries, like a shopping list of infamous bugs. These unfortunate moments – such as when you find your character stuck in a piece of scenery and are forced to restart the level, automatic cut-scenes not starting when they should, or an achievement/trophy popping up for one player but not for your couch co-op partner (still no online co op) – are usually brushed aside with the overpowering “but it’s a LEGO game” defence.  It’s true, the rest of the game is normally high enough in quality that these issues, while annoying, won’t break the overall experience and it’s certainly true of Marvel Super Heroes.

LEGO Marvel Super Heroes does have its own unique brand of bugs and glitches that appear new to the franchise, however.

The inability to turn during mêlée combat, for example, is very frustrating and can means that during a cluster-fight where you are literally surrounded by dozens of enemies, you can’t simply keep mashing the attack button and use the analogue stick to direct your attacks. No, you need to physically stop attacking, turn your character and then resume attacking. This is annoying for me, a (admittedly childish) fully grown adult, and I can only assume that it’s going to be unbearable for younger gamers. This is counterbalanced with the usual inability to die, which may feel a bit too easy at times for more experienced gamers, but let’s not forget that it’s a LEGO game, not Dark Souls. 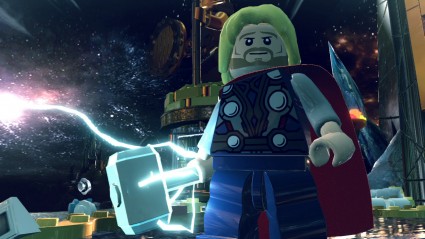 By the beard of Odin!

Without a doubt, LEGO Marvel Super Heroes is the most graphically satisfying and smoothest title in the series to date. It always feels odd to praise a LEGO game for its graphics, but I really enjoyed the look and feel of the open over-world in this iteration; the detail in the buildings is phenomenal and it’s hard not to love how everything is faithfully recreated with the ever famous LEGO pieces. It’s a complete LEGO world and it feels wonderful to just wander, fly and swing around in and sometimes it feels weirdly reminiscent of GTA V.

Like GTA, you’re spoilt for choice. Dive-bombing at civilians or jumping off the S.H.I.E.L.D Helicarrier, freefalling through rings of LEGO coins; whatever you do exploring this world is tons of fun. Hordes of side-missions are dotted around the map like metaphoric LEGO bricks in a shag pile carpet, just waiting for you to stumble onto them. Just don’t forget about the story missions in the process, all rich with Traveller’s Tales’ ingenuity with puzzles that makes splendid use of Marvel’s super-powered characters.

The game includes a staggering number of Marvel’s roster, over 150 of them to be exact (including Stan Lee himself), and it’s obvious that this is a game built from the ground up for diehard Marvel comic book fans. If you don’t know your Howard the Duck from your Arnim Zola, you might get a bit lost in this line-up, however. Fortunately, there is no one character that remains prominent, and in true Traveller’s Tales fashion, each has their own uses in the getting through the levels and solving puzzles. Those who can fly, those who can fire lasers, those who can turn invisible; each are grouped together so you can essentially play favourites. Did you prefer The Hulk or The Thing as an unstoppable smashing machine when you were a kid? You’re free to pick and choose as you go. 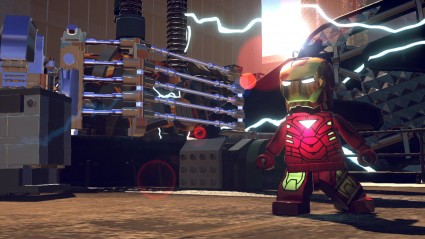 To be honest, this iteration is only hurt mildly by the inherited issues from the franchise as a whole, and maybe the voice acting. Granted, it’s impressive to give each character their own voice, but having now been exposed to the excellent Marvel movies, the act of listening to someone who isn’t Samuel L Jackson or Tom Hiddleston perform as these iconic characters voices feels a little off.  It’s certainly not a game breaker by any means and, personally speaking, this game will give you hours of enjoyment regardless of which current or next-gen system you buy it on.

Excelsior!
This is without a doubt the most enjoyable LEGO game to date. The series has had its ups and downs, but the overall formula has always remained fun. It might not be the game you stop playing GTAV for, but if you’re looking for a dose of purely innocent, tongue-in-cheek fun with your favourite (or sometimes forgotten) Marvel superheros, then you can’t go wrong with LEGO Marvel Super Heroes.