I’m not sure when I was drafted.

At the start everything seemed so simple, there was the sub and my plane – I was a trainee. No expectations. Then I was charged with going up. Up. Up all the way. I hadn’t a clue as to how to handle the craft I’d been bunged inside, its tiny shell appearing incapable of saving me from the pilots who were suddenly hurtling my way, guns ablaze. I fired. I survived. I was informed by a gentleman – who looked suspiciously like he’d happily stuff a rocket up a hippopotamus’ backside if there was a slim chance that it would give a man an edge in a dogfight – that I was a full fledged member of the crew. A Rauser.

I was sent out again. I found out how to work the rudders to effectively loop around my pursuers, avoiding their fire. I squeezed the trigger and fired upon the dogs that wouldn’t leave me alone. Dipping and diving through the sky, bouncing and skimming over the water until I found myself rammed into the stern of a supply ship. Clever, Rauser. Clever. What fresh new hell was this?

Luftrausers looks simplistic at first glance. The world isn’t three dimensional; you only act within two dimensions. Time has no meaning, only the score; the MAX combo. You fight to survive, survive to fight. You always emerge from a submarine, your airplane appearing to need no runway.

The aerial acrobatics you take part in can last as little as ten seconds or seemingly drag on forever as you desperately hang on to your MAX combo. Always gunning down enough enemies to keep the combo alive, but trying desperately to not be pulled into a fight with you versus thirteen of the enemy’s planes, several of their smaller ships and one of their battleships… or two if you’re really unlucky.

Score climbing, I became very aware of how quickly the tables could turn. The better you do, the more the enemy do their best to kill you. Not that the enemy always has to try to take you down. Your own actions could be enough, the clouds that gated me off from the upper climbs of the sky or the waves below; both were efficient at breaking my plane apart with prolonged, sometimes short, exposure. 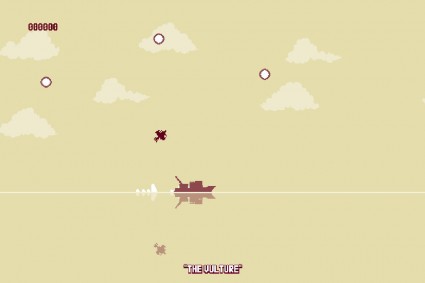 My preferred machine of death.

The crew of the submarine will reward you with new parts of plane to play about with depending on whether you meet certain criteria while flying around. Here is where things begin to become trickier than just chasing a high score. The criteria can be as simple as a cumulative goal of destroying so many types of opponent with a certain piece fitted to your plane. Other times you must destroy a certain number of enemies in a particular way during just one playthrough.

In all there are possible 125 different part combinations based on a front facing weapon, a hull build and the kind of engine you are using. Each combination has its own name. My preferred combination in where I got to in Luftrausers tended to be “The Vulture”. It had a five shot firing gun on the front, an engine that propelled me with bullets from behind and a body that was rigged to blow with a nuclear bomb the moment my craft was overwhelmed.

Not all combinations are created equal, however. It is possible to assemble disastrous planes that have no right to claim the skies above. In these instances of poor assembly, I found that I had normally messed-up my maneuverability and firing rate at the same time. I may have fixed on a low fire rate weapon like the missile launcher, added a rear propulsion unit that gave me fast speeds, but poor turning and the body sacrificed speed for health. While planes are able to recover from damage when you stop firing, this means little if the build doesn’t help you to mow down enemies before attempting to snatch a second of calm. 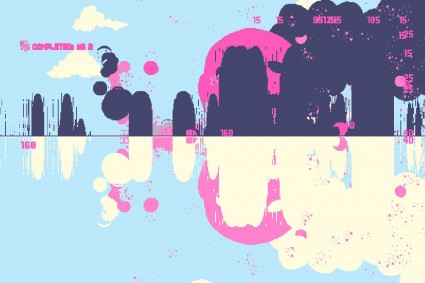 Regardless of how dramatic scenes would become on my screen, Luftrausers really began to drag out after ten levels. Each new level demands that you meet a higher cumulative score, while the pursuit of this through combos inevitably ups the enemy count and lethality. Sure, my single flight that ended in a measly fifty points would count towards me breaking the 100,000+ barrier, even a successful run of flights wasn’t enough to make me feel really motivated to play.

Motivation to continue playing lied between my want to obtain new plane parts, a desire to reach a high enough level or score to generate the mysterious “blimp” that begins to get a mention in level criteria quite early in the game and… online leaderboards. Briefly I was in the top 1000 worldwide PC players with a score of just over 16,000 and then I hit a wall. Moving on in the game was severely out of balance with my own flight skills.

Grinding on with a slew of poor scores to try and progress to the next level, and without meeting the necessary criteria for obtaining new plane parts, the game became drawn out and less and less appealing. Hitting this invisible skill limit, even going away from the game and coming back to it the following day, and the day after; once I had plateaued, that was it. It all looked charming, but feeling I could get no further was demoralising.

Time to take to the skies

If you can break past the game’s desire to see you dead at every possible opportunity or hold on to your MAX combo for finger-achingly long amounts of time, then you deserve to face down the challenges presented by Luftrausers. Its minimalistic but beautiful shell disguises a game that has a great deal of longevity so long as you can continue to up the ante against your opponents.

A Skyrim addict, prone to relapses, Emily has been writing about games for over five years. Equally likely to be found with a comic book in her hands as a gamepad.