Masochisia is a self-described 2D horror game by developer Jon Oldblood that deals with some pretty heavy themes. Its opening is not only accompanied by a warning, but it also has a dedicated link in the main menu encouraging those suffering from thoughts of depression and suicide to seek help.

This sets the tone for what is a short, unflinching and powerful narrative-driven point and click game that will only take two or so hours to complete, but it’s one that will remain firmly in your thoughts for days and weeks after it’s done.

You see the world through the eyes of Hamilton, a troubled young man with a deeply disturbed family and past. It’s pretty obvious from the top that things aren’t quite right with young Hamilton as he seeks to make sense of some of the more intensely violent and harmful thoughts he is clearly struggling with.

Visually, the art style is dark and unique with environments being dominated by odd curves and shapes, almost like a collage. Characters take on a soulless and pale appearance, seemingly wearing their instabilities like a skin. Hamilton’s father is a scrawny, older man with jet black eyes who shakes incessantly whilst holding his cane and bottle of what I can only assume is booze. His mother is a gaunt and jagged woman, showing off the years of patriarchal tyranny from her ‘better’ half.

Set in and around his family home and its considerably ominous surroundings, everything appears pretty dismal, and with good reason. Hamilton has suffered some pretty clear psychological abuse at the hands of both his emotionally labile mother and exceedingly volatile and violent father, which manifests itself with powerful intent throughout the duration of Masochisia’s story. Despairing the loss of an older child, Hamilton’s parents deal with this by beating the absolute bollocks out of both Hamilton and his pathologically sadistic brother Walter, who happily, and quite disturbingly, revels in the regular thrashings his father would hand down. 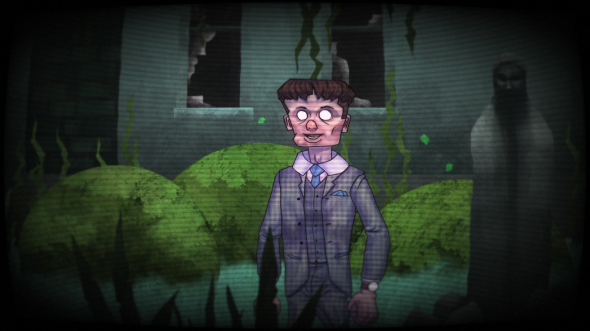 The art style is haunting…

When Hamilton isn’t engaging in scathing verbal exchanges with Walter or his parents, he’s busy coping with the fallout. As his ever present paranoia slowly takes over, his grip on reality becomes even more tenuous. The screen shifts around in colour and distorts, and you start to hear the voices that echo through Hamilton’s mind from time to time. You can momentarily halt this onset by making Hamilton take his pills, though, much like in real life, this is only a band-aid solution that works for a brief period before the horrors start setting in again.

As things slowly go from bad to worse and the pills become less and less effective, Hamilton begins to rely on self-harm to bring on his self-described “sweet release” by stabbing his palms with heavy pins. It was at this point that I felt hugely empathetic towards Hamilton, in a way that I hadn’t really felt towards any protagonist before. The feeling of hopelessness I felt for him was almost so intense to the point where I found myself trying to detach emotionally from the whole thing.

Mechanically, Masochisia is pretty simple, which allows for the player to focus more on the story being told, rather than having to wrap their heads around any complicated controls or gameplay ideas. Moving between areas is as simple as scrolling through the environment and clicking a path. Each area looks fairly distinctive, and thanks to its smallish size, it’s simple enough to learn where everything is if you do happen to get lost, which you shouldn’t.

The inclusion of dialogue choices feels like a bit of a misnomer in terms of narrative direction. Despite the choices being minimal at best, with two options being the norm and three in the odd pivotal moment, I never felt like it would alter how things were going to turn out. I wasn’t so sure how I felt about this at first, but once I’d reached the story’s conclusion, everything has fallen into place. 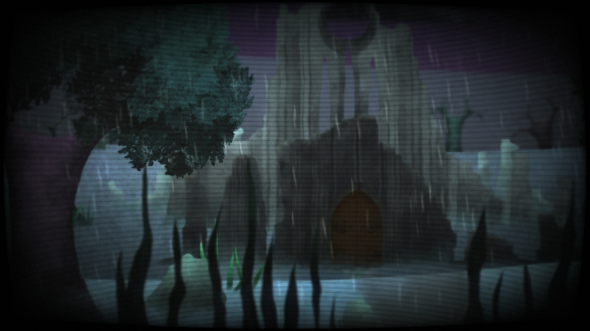 As re the locales for that matter.

Whilst the illusion of choice is thinly veiled for Hamilton, for the player it’s something very different. Most dialogue options are firmly either for or against whatever is happening in the story at that time; you can either accept it or you can fight it. As a player, this was a way for me to express my empathy for Hamilton, and so in an attempt to change the course of Hamilton’s destiny – a theme which Masochisia plays on regularly – I would make him express doubt about his actions. In turn, this would have a severe effect on how I personally felt about the utterly gut-wrenching ending.

It’s worth mentioning that the soundtrack is intensely bipolar, ranging from ethereal to dissonant over the course of the games six acts. Headphones are a must for the full-blooded effect of the more chilling sound effects used, and as many of the heavier moments lean heavily on the audio, you don’t want to be relying on laptop speakers for the best experience.

Watching Hamilton go through all the changes he goes through is difficult, so much so that it’s pretty clear why Oldblood felt the need to include a number of warnings at the game’s beginning. Everything about Masochisia seeps bleakness, and for good reason. It sets the tone of what is to come – there is no room for hope in this story. All it yearns for is understanding on the part of the player, and it goes about it in a fashion that exerts brute force. While this is not a “fun” game by any stretch, it’s not meant to be; it certainly is important. Masochisia will make you understand, whether you want it to or not.