Motorcycle racing, even just motorbikes in general, are pretty difficult to translate into a fun video game. Compared to cars, bikes are unresponsive and difficult to maneuver. This rings true in MotoGP 15, and being more a racing car guy, I found the transition from four wheels to two to be not only frustrating, but also challenging and rewarding at times. It’s not going to set the racing world on fire, but MotoGP 15 is a good representation of modern-day motorbike racing that fans will mostly appreciate, although it suffers a few technical setbacks along the way.

I want to focus on what’s good for the moment, though, because there is quite a bit about MotoGP 15 that I like. The sport is extremely well represented with not just the 2015 MotoGP series, but both the Moto2 and Moto3 junior series also, as well as all three series’ 2014 teams and riders, and a bunch of older, two-stroke 500CC bikes. The kind that Valentino Rossi grew up racing with the likes of the legendary Mick Doohan.

There is a career mode where you can create your own rider and start out with a couple of wildcard entries into Moto3. Earning good finishes will see you get a contract from an established team, and should you prove successful enough, you can work your way up the ladder to the pinnacle at MotoGP level. You can also choose to start your own team, once you’ve made a name for yourself on track. You can sign sponsors and purchase bikes using GP credits, which are earned after every race. 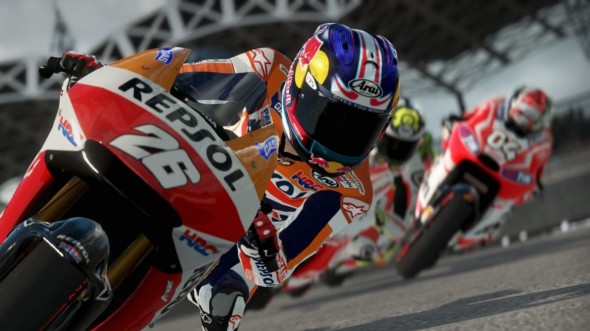 So close, you can smell the sweaty leathers.

Also earned is XP; the more XP you earn, the higher your rider level, the more unlocked content you can access. Both current and legendary riders, some of the legacy bikes, and a few photos and videos are there to be earned. I’m not too keen on the idea of unlocking riders as such, but I feel like the addition of the multimedia content is a good service for the fans, who’ll appreciate that kind of thing.

The racing itself is challenging, even from the perspective of simple bike control. There are three different physics modes available, from simple to pro level. Simple physics mutes much of the nuance involved in controlling the bike, and the addition of aids makes it by far the easiest way to learn what you’re doing. Once you feel a bit more comfortable, I definitely recommend taking it up to one of the higher physics settings. The bikes feel much more alive, though require a more deft touch to control. You can set the traction control level (a requirement on racing bikes with so much power) as you race by simply tapping up or down on the D-pad, which is handy if you want a bit more control on how you put the power down coming out of slow corners.

The AI is also pretty good. There are a few odd collisions every now and again, with riders seemingly missing their braking points and using you as an anchor, but for the most part you can race them close and hard and they’ll hold their own, especially once you turn the AI difficulty up. As for racing against other people, there are online matchmaking and private lobby options, as well as leaderboards and a ‘Sprint Season’ mode, although throughout my entire week of trying, not once could I find any multiplayer session. Nor did I have any luck trying to start my own. 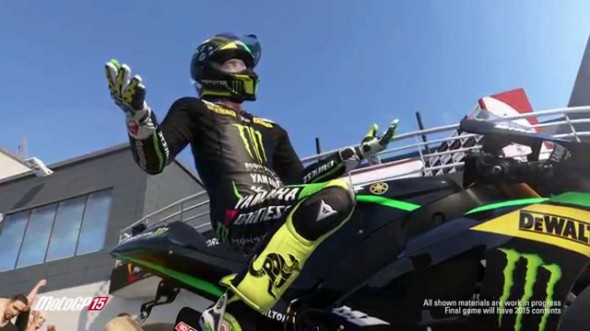 Where are the other players? Hell if I know!

There are a few more customisable areas to the game. Weather can be set for single race weekends, though it’s not dynamic, meaning that the conditions at the race start will be the same when the race ends. I honestly didn’t feel that much difference between riding in the wet and in the dry, which was a shame. There is less overall grip, but not by much at all, which took away any of the fear element that racing in the rain normally brings.

The wet weather also doesn’t help MotoGP in the looks department. The spray from other riders can cause considerable frame rate drops and stuttering, which is a bad deal for any racing game. For the most part, the bikes and riders look pretty good. Fairly well detailed and modelled; worthy of the close-ups afforded them in the game’s well-presented menus. However, everything else looks just a bit bland. Track textures often appear flat in tone and lack any pop, and some tracks lack the atmosphere of others.

The audio is fairly standard. Nothing here will set your ears alight with excitement. The bikes tones vary wildly as you’d expect, but ultimately end up sounding more a drone of bees than anything else. I will admit that I enjoy when you hear the pack of bikes altogether on track though, it was one of only times this game got the hairs on my neck to stand up, and it was very brief. 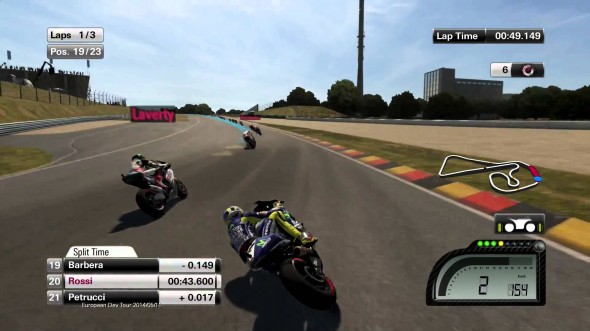 It’s also unfortunate that a recent patch on the Xbox One version, while fixing a couple of issues, has made it impossible to play a Career mode taking part in anything more than just the race session. There are options to race a full weekend, or just qualifying and the race. However, if you try to go forward and advance from any of these sessions through to the next one, the game hard crashes to the dashboard. And it does this every. Single. Fucking. Time.

I sighed so hard my eyes fell backwards out of my head and rolled away.

Not quite on track

So with that, I’m not sure what to tell you. This is probably the best video game representation of MotoGP ever made, but that doesn’t mean you should go out and buy it just because you’re after a racing game. If you’re a fan of the MotoGP series and bike racing, then MotoGP 15 is for you. It has a stack of content and is challenging. Ultimately though, with online being a ghost town, and the nature of bikes being what they are, I can’t see myself trading in my four wheels for two any time soon. There is plenty here for fans, but not much for the layman.