Murdered: Soul Suspect has been on my radar for quite some time. Let’s face it, what could possibly be cooler than a detective solving the ultimate murder; his own? It’s one thing investigating a murder in the first place, but that’d be positively boring in comparison to solving your own, surely?

Unfortunately, come the end of Murdered I was left a little let down by this story-focused, supernatural thriller. Yet, while it never hits its full potential, there is some enjoyment to be had in following the story through to its shocking conclusion…Straight from the off, Murdered: Soul Suspect throws you into the thick of it. Taking place in the town of Salem, you witness the murder of the protagonist, Detective Ronan O’Connor, at the hands of a serial murderer known only as ‘the Bell Killer’. Left out of heaven to complete his unfinished business, Ronan teams up with a clairvoyant girl named Joy and sets out to stop the Bell Killer before more victims are added to his body count.

Prior to going in, I felt the premise was really intriguing, what with the whole ‘whodunit’ angle, and it was strong enough to keep me focused throughout. It’s surprisingly well written, not only providing a satisfying pay-off, but it also makes up for shortfalls I’ll go into shortly. Side plots are plentiful and although are worth following, they’re merely a distraction and add nothing to the main story, which remains Murdered’s biggest strength. Overall, however, you’ll find well-paced and compelling thriller with enough twists to keep Stephen King happy.

The cast – including Salem’s NPCs – are all fully voiced, although I did have a few issues in gameplay. In one area there was the same voice actor and the same dialogue for two characters not more than a stone’s throw away from each other. In another section, the entire dialogue was broken and missing from a key NPC. I honestly thought I had crashed the game, and I couldn’t progress until I skipped the important audio completely. For the most part, though, everything is in place as it should be and each voice seems to fit its character. 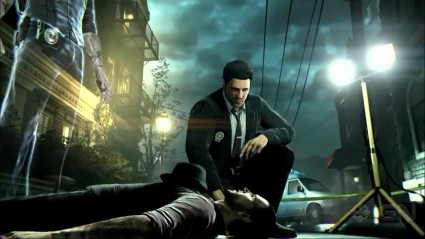 The visuals do set a macabre vibe over Salem, although this is limited. Dark tones give off a feeling of death and morbidity, but this is as far as it goes. Being dead in Soul Suspect offers no visual flair, just colourless, ghostly portions of environment that don’t exist in the living world and a slight blue haze over the rest of it. This, coupled with the various sound issues, does take a bit of a shine off the overall presentation.

In gameplay terms, Murdered: Soul Suspect has you running around Salem, not only solving your own murder, but also discovering the circumstances of other murders, accidents and suicides. This usually involves you following clues, interacting with and influencing the living, or using your ghostly gifts to have a glimpse at the past to solve puzzles to progress. Once you’ve gathered all the evidence you can at a scene, you have to piece together the most relevant elements to help further your inquiry. Initially you’re working all alone at this, but once Joy joins the party, you can use her to help you do the things only a living person can do. You also have to guide her while pursuing your leads.

Although enjoyable, I did feel that the exploration and crime scene examination elements were lacking and a bit too simplistic. This isn’t a deal breaker because the story is clearly the focus, but the investigation mechanics could have been built upon and the puzzles made much more mentally challenging. This is more of an issue in the side-quests, which didn’t extend the investigative side of Murdered in the ways I would have liked. Backstory and other subplots related to Salem’s history can also be fleshed out, however, through collectable ghostly items that are unique to particular areas. Once you’ve found the required amount you’ll be treated to extra dialogue or further information in the case file menu.

Because Ronan is a ghost, he has the ability to walk through pretty much anything; people and objects alike. You can’t walk directly into buildings, though, as these are blessed and require you to go through an open door, window or by possessing a living person. Much like the dearly departed Patrick Swayze, you can’t fully interact with objects in the world and are limited to distracting or influencing the living when required. It’s a cool feature that adds weight to the idea that you’re a real ghost, and finding other ways of interacting with objects and people can be a fun puzzle in itself. 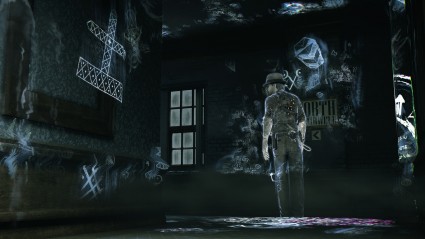 Ghost Writer… on the wall…

Some sections also require you to possess cats [GOTY! – Andy] and taking control of a feline helps you move around to higher places or areas that would not be accessible in your usual ghost form. Unfortunately you can’t possess anything else, but you can interfere with electronics to cause distractions to NPCs.

While all the abilities you have are fun to use, I did have an issue here. When Ronan has his predicament explained to him at Murdered’s beginning, you’re given the impression that you will learn or unlock a host of abilities as you progress, some that are totally unique to him and some that will be a standard for all ghosts. Funnily enough, all the abilities are learned from others and are seemingly accessible to most, if not all ghosts. I was left expecting more additions unique to Ronan’s talents, and unfortunately they never arrived.

Enemies are practically non-existent, except for thinly spread moments with vicious demons that you only have to avoid by hiding in souls scattered around the areas. You can destroy them by approaching from behind and, in some cases, that’s the only option. This feels like a real last minute addition to make Soul Suspect seem more video-gamey, and it quickly becomes more of a repetitive annoyance than anything else.

I don’t believe it, I’ve been shot…

Murdered: Soul Suspect starts well but the investigative elements are rather straightforward; a means to an end rather than a mental challenge. What it does is solid enough, but ultimately it’s more of an interactive movie, well written but lacking in features. This isn’t to say that the direction is bad, but I did feel that I was promised more than I got.

Still, it’s nice to see a developer take risks and although not all the ideas work brilliantly, I believe that the story at least is worth the effort.