Having grown up a fan of the original Need for Speed series since its early days on PC during the mid-nineties, I was one of those that watched the series’ transition from exotic, high-performance sports cars through to the Underground, tuner-era Toyotas and Nissans with disgust. That dash of car-related elitism, combined with my rather cynical view of the typical EA blockbuster formula, put me off many NFS games since. Of the few that I did actually play, I was put off even further by the feel of the driving, which is a failure to nail the most integral feature in any car game.

I’ll completely admit it: I came into this expecting the worst. Let’s be honest here, it’s really easy to be cynical about Need for Speed. Ghost Games decision to use story through live action footage has been endlessly dissected before release, and with good reason: It’s bloody terrible, but I’ll unpack that more in a moment or two. Plus, how many times have we seen the term “reboot” become associated with under-realised potential?

In many ways, my preconceptions were entirely unfounded; in spite of some spectacularly poor design choices that hold it back from being something truly special, Need for Speed nails the fundamentals vital to an arcade racer.

You play the new kid on the Ventura Bay street racing scene, who falls in with a group of five ragtag hoonigan types, each looking to leave a stamp on their respective “disciplines”. To do this, they have to gain the attention of the elite drivers at the top of each field. Perform well enough in these events and you’ll gain REP, plus a hefty sack of coin as well. Increasing your REP increases your driver level, which unlocks a crazy amount of custom car parts that you can then purchase and install in your ride to pull more performance.

The five “disciplines”, and I use the term loosely, are Speed, Style, Crew, Outlaw and Build. The two most different are Speed and Style. Speed focuses more on the time trial aspect of street racing; smooth lines and controlled inputs. Style, on the other hand, is more drift focused. Outlaw is all about pissing off the cops and causing destruction, but it’s actually much tamer than it sounds. The police aren’t particularly a threat and don’t take a whole lot of effort to shake off as long you stay away from spike strips. Crew seems to be a bit of a mix of both Speed and Style, whilst Build is more about making sure your car can meet the performance goal in an event by installing a few after-market parts.

The events themselves each have a specific focus,  for example a speed event will progress that sliver of the narrative, but everything you do within that event will earn REP towards any of the five skill categories, as well as your overall REP. Running things down and causing destruction earns you points for Outlaw, whilst executing a perfect nitro boost, or nailing a good 0-100 kph time will gain you Build points. You can do all of this whilst in the middle of a Crew run. It’s quite flexible. 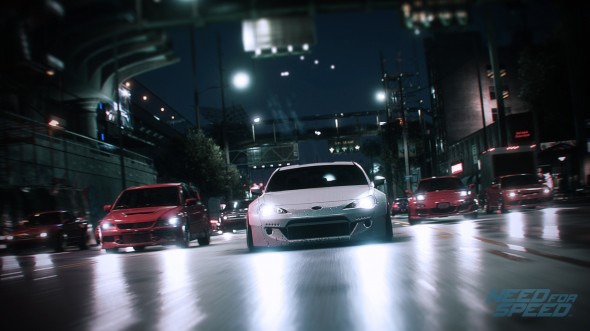 It’s night time in Ventura City more than it is in Gotham.

Plenty of licensed cars are here for you to choose from, from tuners like the Toyota Supra SZ-R up to the exotic 2015 Lamborghini Huracan. The selection isn’t comparable to Forza Horizon or DriveClub in size, but it has all the big names, including the exclusively-licensed Porsche; a great thing for fans of the generally horribly underutilized marque. Each car has a unique feel and sound to it, as you’d expect, and the engine tones differ greatly from the standard normally-aspirated V6 through to a screaming turbo-charged V12, and anything else in-between. The more powerful rear wheel drive cars are much easier to drift with a little throttle and handbrake control, whereas all-wheel drive will give you excellent acceleration off the line and out of corners.

Car customisation is one of the real highlights in Need for Speed. There is a bountiful selection of parts to choose from that will upgrade your car both in terms of performance and look. Visual and performance upgrades are separated, and altogether it really provides one of the game’s strongest pillars to lean on. Performance boosts include adding nitro boosters which give you a small burst of extra horsepower; great for exiting slow corners or burning up a steep hill. You can also change practically every performance part in your engine, add a turbo or supercharger, new tyres, springs, brakes. You name it, it’s probably there. It’s way more comprehensive than I was expecting and adds a level of depth that pays big dividends in terms of enjoyment behind the wheel.

Each car looks beautiful, too. The car models are incredibly detailed and it’s helped by a particularly impressive lighting engine that is given the chance to shine, if you’ll excuse the pun. Ventura Bay is brilliantly realised, although it’s a city of perpetual darkness for whatever reason, only ever transitioning between dark and rainy to a clear night sky. The streets are nearly always wet, giving the city lights a chance to shimmer off the ground as you race by. It’s a dramatic effect to say the least, but it goes a long way in providing a good sense of speed.

From massive highways, to car parks and winding mountain roads, Need for Speed is not quite as varied or tonally vibrant as Forza Horizon 2‘s open-world by comparison, but is every bit as detailed. It’s not all roses, occasionally they’ll combine a bit of in-game car footage with the live action stuff, and that can look a bit sketchy in parts. There are a few framerate issues on Xbox One as well, with a bit of random slowdown occurring from time to time, but certainly not so often as to make the game unplayable. In general, it’s hard not to be dazzled by Need for Speed‘s in-game visual presentation. 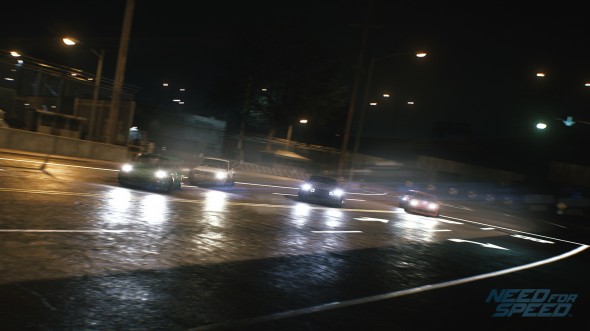 The rain effects add a lovely sense of speed…

Perhaps the biggest issue I have is with the story presentation: Why include the full video sequences with the crew? Why bother having a story at all? It’s a question I’m still asking as I sit here, writing this, but I don’t think I’d be asking it if it wasn’t so awful and pointless. The inclusion of a narrative is supposed to move things along in a motivational sense, but here it’s such an artificial motivation and is totally unnecessary. It’s prescribed to the player, and demands us to care about impressing these people in the top echelon of some street racing lore that we have zero background in.

Look, it’s not even that the actors are bad, they do a good enough job with the garbage material they are given to work with. In fact, they are pretty convincing when they are talking to and interacting with each other. It’s when they turn to you, the camera, that things take a weird turn for the worse, and it doesn’t get any better the more time you spend with them, either. They are kind of narcissistic and spend a lot of time bickering with each other about how good they are, without ever actually doing anything. Spike, the speed guy, will bang on and on about how he’s gonna beat Magnus Walker’s speed times, but you never see him anywhere. The fact is, as much as the characters wax lyrical about their skills, the only time you’ll ever actually interact with them is when they are in their car, next to you on the road. Even then, they usually just tend to get in the way.

Because many of the courses intersect each other in the open-world, you’ll often end up in situations where a pack of A.I. cars are heading directly at you while you’re in the middle of a TT or drift run. The phone calls you receive from time to time – sometimes in the middle of races,  a problem in itself – would’ve been a better way of presenting these characters rather than awkwardly putting them in your face to brofist each other every 20 seconds. The writing is simply atrocious, and I truly feel that Need for Speed would have been much better off without any of it.

Finally, Need for Speed is always online, and requires a constant internet connection to work at all. Why this is insisted upon, I don’t know, but it is, and it’s not really needed. It ties in lightly with the open-world play; you can see other drivers competing in their events, even follow them around if you wanted to. You can also challenge other drivers to a race by pulling up next to them and hitting the right bumper, or R1. It’s fine, it works and is actually a bit of fun, but give players the choice, please.

Why Ghost Games didn’t feel that the variety and depth, specifically with their customisation options, would be enough of an impetus for players to keep going, I’ll never know. This aspect is so strong, and strikes through the entire core of what Need for Speed is. It’s tied so heavily to progression, and provides more than enough of a catalyst to keep you driving. You’ll want to try new cars. You’ll want to make them your own. You’ll want to thrash them through the gorgeous side streets of Ventura Bay, but you’ll probably want to do it without a bunch of assholes condescendingly talking shit in your ear.

Even with all that I dislike, I’d be lying if I said I wasn’t surprised by how enjoyable Need for Speed turned out to be. It nails the core fundamentals so well that the awful story and dialogue may not even matter to you. If you fall into that bracket then Need for Speed will show you a great time.