‘It’s the car, right? Chicks love the car’. Ok well it’s probably one of the best lines in one of the worst Batman movies, but it still remains a fact that we all want the car, but we won’t get it in this review. Batman has been around since 1939, which makes him pretty god-damn old and he is still kicking arse today. Having spawned a hell of a lot of comics, books, films and those all important cartoons, Batman has also had a few games over the years but nothing memorable.

Deep in the basement areas of the Batcave (AKA Rocksteady Studies) Batman: Arkham Asylum has been developed by people who on the basis of the game are massive fans of the character. When Andy looked at the demo, you may remember that he had concerns over the ease of the combat, linearity and whether the game would become too repetitive, thankfully these fears are all now moot as Rocksteady have truly delivered.

‘Riddle me this riddle me that, who’s afraid of the big black bat?!’
At the beginning of the game you learn that The Joker has attacked Gotham City Mayor’s Office. Batman defeats him with little fuss and we pick-up where Bat’s is marching him back to Arkham Asylum. Arkham seems to be over capacity due to a fire (conveniently on the same night) at Blackgate Prison. Troubled by the lack of fight that Joker has presented at the mayor’s office and the night’s events, Batman decides to escort him personally to his cell, on the way there however, Joker escapes aided by Harley Quinn and takes over the facility. Soon the inmates from both prisons are running amok and Joker starts to deal his hand. Setting up a deadly game of cat and mouse between himself and Batman, Bat’s must think fast to bring order back to Arkham. Batman is pitted against not only the Joker and Harley Quinn but also Scarecrow, Mr Zsasz, Bane, Killer Croc, Poison Ivy, Jokers gang, and the hundreds of inmates and lunatics currently residing in Arkham. The Jokers real motive and plan is yet to be discovered but rest-assured that Batman is in this for the long haul.

Quickly… to the Bat Cave
Unexpectedly Arkham Asylum is set-up almost as an open world. The various locations are designed very well with their own personalities and lots of hidden areas and places to explore. The bulk of the missions and tasks are undertaken inside the various departments of the institute and in the catacombs below. Outside and inside you have to explore; the path isn’t always straight forward and you have to work your way around blocked and locked doors. You can bring up a map of the island at any time to not only see your location but also so you can see your objective(s) that are usually clearly marked. 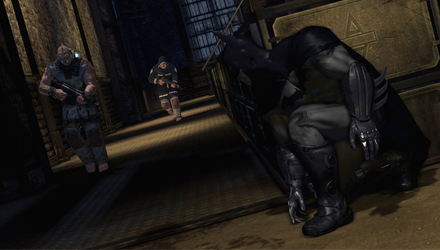 Where did I leave my batarang?!

The gameplay can be split into three different categories; combat, stealth, and detective work and puzzles. These are all seamlessly assembled together and are not complicated last-minute additions or gimmicks, but well thought out pieces that have been slotted together with precision.

Combat is the first thing that you are thrust into and at times feels very much like you are watching a movie. While using the ‘freeflow’ combat system you only use three buttons and produce the following actions; attack, stun and counter. When an enemy attacks an indicator shows above their head and if you press the counter button quick enough, Batman counters unleashing some pain on his foe. Using the attack button and aiming Batman at different enemies as well as countering, you can produce some cinematic quality fights that almost look choreographed. Even in close quarters they still look brilliant and work well, with no limbs magically going through walls. With it being basically a three-button combat system, you would be forgiven for thinking that the fights might lack depth; this is really not the case. While it’s easy to pummel a load of guys into the ground, to get the best of out of the game you must learn the rhythm and flow to effectively take everyone down.

The stealth element of the gameplay is very simplistic but cleverly thought out. At certain points in the game there are times when you have to stay hidden and tactically think about how to get behind the enemy and defeat them. Some enemies have guns and if taken on directly you will be presented with the short and swift execution of Batman. Using gargoyles to hide up high and sneaking around is sometimes the best way, and unlike in most stealth games you aren’t hidden in shadows.

You will be using many tactics to take your foes down, including climbing through vents, keeping hidden behind walls and making use of Batman’s equipment like the Batarang to stun enemies and grapple to get from place to place. Once an enemy is stunned or you are behind him you can silently take him down. Later in the game you have enemies with ‘suicide collars’ which activate an alarm bringing more guards with them. If you are on a gargoyle then you can learn the ability to string an enemy up by his legs, but this tactic leaves the opponent awake and alerts others, so once you have grabbed your unsuspecting enemy it’s always best to get out of the area before the others come.

Whilst getting into fights and sneaking around Arkham there comes a time when Bats has to use his head, for example such cases may include looking for a clue to locate someone or something, or solving one of the Riddler’s puzzles. Using detective mode changes the HUD, and everything of importance becomes highlighted. If you’re looking for a clue however, you will need to keep your eyes peeled then scan the evidence. This involves looking for traces of a person so that you may track where they have gone or where they have been, then continuing to use the detective mode you can follow their trail. Detective mode is also a good way to see where your nearby enemies are and whether or not they have weapons. 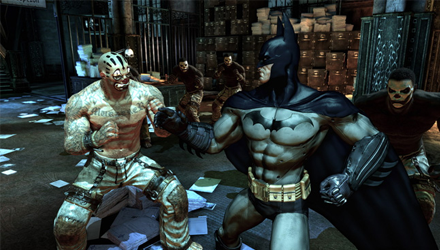 Arkham Asylum also incorporates light RPG elements too. As you battle and solve puzzles you gain experience points and after passing the threshold you are able to upgrade your equipment and learn new combat moves. This isn’t a major part of the game but allows you to gain new abilities armour and more health. You can also as upgrade your equipment, such as getting access to a remote controlled batarang, or turning your explosive gel into a proximity based weapon. Once the main story is finished, you can still explore the asylum and solve all the puzzles and collect all the character profiles and trophies, giving you even more experience.

Joker has something up his sleeve and I’m gonna stop him!
The Unreal Engine is famed for having issues with optimisation (such as textures not loading immediately) but thankfully this isn’t the case in Batman. Each character is brilliantly rendered and they really come to life on the screen. All the buildings and areas all look amazing and miraculously it still manages to keep its comic book feel throughout. There is consistency and the developers have tried and have succeeded in keeping this high level of detail throughout the game. The cut-scenes all use in-engine graphics for most part, and this is by no means a bad thing. There are some really cool ideas put into practice here, one of the most notable being the damage to Batman’s costume the longer the night goes on.

Would you dance with the devil on the pale moonlight!
If you have ever watched one of the Batman Cartoons you will automatically recognise the voices of the characters. Rather than get a new cast of actors Rocksteady have opted for the better option in bringing back some of the actors that have been playing these characters for years. Batman is once again skilfully portrayed by Kevin Conroy and really brings to life the Dark Knight, and Jokers creepy laugh and sick demeanour is thanks to none other than Mark Hamill, finally Arleen Sorkin is playing the Jokers female counterpart Harley Quinn. The other NPC’s dialogue is also well done, and it’s rare you’ll hear the same bit of speech in the same five minutes. The music has a very high production value, with some parts of the score almost sounding similar to that of ‘The Dark Knight’. Sound effects are second to none and all these factors bring the world to life.

The Dark Knight emerges
For a long time, gamers and Batman fans around the world have waited for a title to do the character justice and incorporate everything we know and love about the universe. But harping on about this being a good comic book game does Rocksteady a huge disservice, as based on a comic book or not this is just a great game that anyone would enjoy. Arkham Asylum has gone beyond the ties of a movie or a previous storyline and created its own legacy. With a brilliant story, a lot of fan service, and enjoyable gameplay mechanics that are seamlessly tied together, something special and fresh has been produced. Even if you’re not a fan of Batman, you probably soon will be and Arkham Asylum should definitely be in your collection. As soon as you play it you’ll realise that games like this don’t come around too often.