Anyone who has been reading my twitter updates probably has a good idea how this review is going to go. Three years ago Gearbox Software gave us a teaser of a new game they were working on.

The video depicted a woman talking to you (the player). At certain points as the camera panned around, you had flashes of some human enemies dubbed ’the locals’, then of some of the animal enemies referred to as ’the wildlife’. One of the flashes tells you you’re going to need guns, lots of guns, showing you a room full of weapons. Finally the camera panned further so that you can see her face; this woman was heavily scarred down one half of her face. She then tells you she knows why you’re there and that you’re looking for the vault (cue a reverse plot of Fallout 3), she finally adds that you won’t find it because it doesn’t exist.

The game has seen a massive transformation in style since that teaser was released, now re-branded as an ‘RPS’ (Role playing shooter), the consistent selling point for me at the time was the huge number of guns the game was boasting, which more often than not something that is restricted in games. Borderlands is finally here with claims that it features ‘87 bazillion guns’. Maybe that’s a slight over-exaggeration but one would find it hard not to be intrigued with a game that has more than 17.6 million of the things.

Welcome to Pandora; it’s fun and full of violence
Borderlands is set on a planet called Pandora, a desolate wasteland where the law doesn’t exist and you pretty much live and die by the gun. Bandits, mercenaries and pretty much every lowlife known to mankind roam the landscape all looking for treasure and more importantly, the vault, which is said to contain a vast treasure and riches. Once you pick your character (of which there is four to choose from) and after a brief chat with a mysterious lady that only appears only to you, you embark on your quest to find the vault, undertaking many missions along the way to gain the trust of the locals.

In terms of plot, the story isn’t over complicated. You have just enough to get you started and the rest you find out through doing the missions. The rest is pure action, possibly going back to gaming roots, where stories were nothing but an objective.

I have found me a gun, now for my next trick… someone will explode!
There is essentially two ways to play the game. The first would be on your own (for all the socially inept people out there) or alternatively you can play co-op with up to four of your mates. The four characters to choose from all will eventually gain different special moves and abilities. After a brief tutorial you can set off to explore the world of Pandora.

The game is at first glance is primarily an FPS however it’s far deeper than that. In terms of the FPS mechanics it’s a pretty solid shooter. However when looking down the iron sights of the different weaponry, the way you aim is dependent on the gun you’re using. Some guns for example don’t have any scopes, so aiming down the basic iron sites can be quite difficult as you only have the reticule when in a relaxed aim. The guns individual stats can also have an affect on your aim and effectiveness, and regularly swapping and upgrading your weaponry plays a major part in the game. On the HUD you have a compass which acts as your guide to the general direction of your current mission. Not having a mini-map can take some getting used to if you haven’t played the likes of fallout, but overall this adds to the exploration side of the game. You also have your health bar indicting how many health points you have and once you acquire a shield it will also display that too. There are also some help guides that pop up on the screen from time to time, but these can be disabled in the menu.

Pandora itself is one of the biggest things in the game. The maps are quite large so there is lots to see. The different areas are sectioned off and using the travel system you can move from one area to another. This involves a brief loading period and only happens when moving to the different areas. It’s not as free roaming as the likes of Oblivion or Fallout, but that isn’t a bad thing. The main maps are massive and there are two main areas to explore, each with other areas that you can investigate. 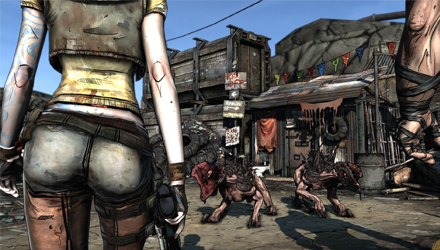 Shake that ass! I love the way you wiggle... Ah-hem

Just like games such as the afore mentioned Fallout, the game is very much mission orientated. The more missions you undertake, the more additional missions open up. Once you have accepted each quest you can chop and change as you wish, giving flexibility. For example if you are doing a mission in a particular area and you know that there is more missions in that area to do, you can go into your menu and change the active mission. This is handy as it means that you can complete most of the missions in an area without constant and unnecessary backtracking. In addition you can do half of a mission and go back to it later on without having to take on the whole list of objectives again. Rewards generally come in the form of experience points and money, although on some missions you can gain new guns or equipment on top of that.

Some of the missions require that you to beat a boss; these generally are a lot more difficult that the regular enemies you will have battled up to that point. To help you level up suitably before biting more than you can chew, each mission has its own rating dependent on your skill level. It tells you how hard the selected mission is, so that you can chose the easier missions first or if you really must, do one of the harder missions for more of a challenge. As in typical RPG format, the more you level up though, the easier the missions will be. Some of the additional missions are character specific, this adds more depth to the gameplay and a reason to play through more than once.

When you die (and it will happen) you will re-spawn at one of the ‘New You’ points, which costs you money and gets more expensive each time you die. Also at the ‘New You’ point you can change your characters name and colours, or later on in the game, unlock the transport system that allows you to travel over long distances quicker.

The levelling system is split into three parts, adding depth to the development of your chosen character. Whenever you kill an enemy you gain experience; when you hit the bracket you level up. The number of experience points also depends on the level of your enemies; weaker enemies giving less than the more powerful enemies. You also gain experience from completing missions, and these bonuses can be quite large. The second part to the levelling system are skill points. Once you hit level five you earn a special ability, which this opens up the skill trees. Every subsequent level after that you will gain a skill point that you can spend on whichever skill you wish. Finally there is the weapon proficiency. Depending on what weapon you use the most, once you have killed so many enemies you gain a proficiency rank.

The higher the level you are works in two parts; it gives you a longer health bar and also means you can use the stronger weapons that are scattered about. Each character has a different special ability and skill tree, because each one is better with different weapons. This doesn’t mean that you are restricted to those types of weapons; just that you will get bigger bonuses on them. When attacking an enemy you have the chance for a critical shot, these do more damage so that you can kill the enemies more quickly. The game is very fast paced and it’s pretty easy to level up with the hordes of enemies that attack you often. On one play-through I was just attacked by the normal types of enemies, though when I was playing co-op and did the same mission, some of the enemies attacking me were elemental based. This also means that no two play-through’s will ever be the same.

Because of the program that Gearbox wrote that randomly generates weaponry, offering millions of possibilities, the weapons in the game vary drastically in design, power, accuracy and fire rate. Two people may never get the same weapons in their individual play-through’s. Some of the guns also have additional bonuses or elemental effects. These effects are corrosive, incendiary, explosive and electrical and do different types of damage. For example electrical elemental guns are good to get around shields and have a chance of stunning an enemy, incendiary weapons are more likely to burn an enemy or set him on fire, corrosive can melt an enemy and explosive says it all. There are several types of weapons; repeater handguns, revolvers, shotguns, SMG, assault rifles, sniper rifles, alien weapons and grenades.

They each use their own type of ammo and can be found after you kill enemies or purchased from a vending machine. Most of the guns can be found after you have killed an enemy or in one of the weapons crates that are all scattered around the world. There are some that can be purchased from a weapons vending machine but for the most part, the ones you find can be far more powerful. Health packs and shields can be purchased from a dedicated medical vender. Every weapon can be very different in either power or appearance. For example you can get a sniper rifle that has the loading system of a revolver, but the cocking mechanism of a shotgun. It’s quite surprising what the game comes up with and sometimes you can find some really ridiculously powerful guns. Also depending on what ‘make’ the gun is, can affect the quality of the gun too. The same rules apply for the shields and they each have different bonuses and defensive properties.