When I first got into gaming, I realised that I took to it naturally. Before I knew it I was looking for the next game to challenge me, this proved quite difficult, mainly because I was finishing games so quickly. That’s when I started to play RPG’s for both the length of the story and the fantasy and mystical premise. I was completely hooked and I will admit, I would rather invest my money in a good RPG than any other genre.

Moving on several years and a few thousand games later, I rented Divinity 2: Ego Draconis from Lovefilm only to be disappointed with the whole game. Everywhere I went within the world I found issues with it that just put me off. It wasn’t that it was broken or anything, just that it didn’t feel rewarding getting anywhere within the game. I wasn’t sold and after giving it more than a few hours, I sent it back, unfinished.

At the end of last year, I received Divinity 2: Dragon Knight Saga. This version intrigued me as Larian Studios had not only created an entirely new game engine fixing a lot of the issues they had in the original port, but they had also included two games in the package. The first was a rebuilt Ego Draconis (the game that made me feel like killing myself) and the second named Flames of Vengeance; a completely new adventure, released as an expansion on the PC. This game describes itself as a 100 hour adventure, and off I set to see if this game was going to make me change my mind about the series.

A story of epic proportions

Ego Draconis takes you to the land of Rivellon, a place torn up in a war between Dragons Knights and Dragon Slayers. Taking on the role of a Dragon Slayer, you initially set out to hunt and destroy the last of the Dragon Knights, only for a twisted event leaving you as the hunted when you are transformed from Slayer to Dragon Knight. Pursued by your former comrades, you uncover the truth about the war and take on Damien, an enemy so dangerous that even gods would quake in his presence.

Flames of Vengeance continues the story directly where Ego Draconis finishes. Taking you to Aleroth (a place you briefly visit in Ego Draconis), where you once again battle the forces of darkness and do what you can to take on Damien’s army before the city falls and all is lost.

The interesting thing about the story is that it is very well told in comparison to other games of the type. I was instantly drawn into the setting the first time I played Ego Draconis in spite of other flaws, and I was equally drawn in on this remake. You can choose how fast you want the story to unfold, either going straight through the story, or as I like to do; explore and doing side quests and various missions. One feature I like is that you can not only play either story when you want, but the game automatically continues to Flames of Vengeance if you start with Ego Draconis.

Dungeons and Dragons, this is how you roll
DKS is an open-world, third person experience; similar to the likes of Two Worlds. The main aim is to explore the world around you, solving problems and undertaking missions of various lengths. The controls are relatively simple, allowing you to map certain actions to both the D-pad and the four face buttons. This makes it easier when remembering what each button does, but they are also displayed on the screen. Interacting with the world is also very simple, with just one press of a button to activate everything from speech, to opening chests and picking up items from fallen enemies.

As in most RPGs, when you undertake missions you will gain experience and you are then able to level up and gain new abilities. These abilities are anything from magical abilities such as fire balls or defensive abilities such as regenerating health. Magical abilities use mana and always have a recharge period; this time is lessened the more you upgrade them. Not all abilities require it though, only the active skills. Passive skills are automatic and can also be levelled up. Once you reach a certain point in the game, the level caps for all the skills can be extended but this does come with a price. Some skills you can learn enable you to summon a partner (a ghost, undead, demon etc) through either necromancy, or magic for a short period of time. These do come in handy, but at early levels are easily defeated. 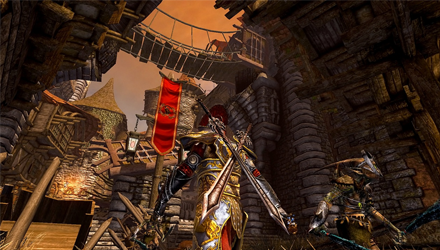 Within the game world you have your usual array of potions and items to collect from fallen enemies. Some of these items can also be purchased in shops or from merchants around Rivellon. Beware, though, as once you buy them, there will be no more. This is something I noticed with the potions, which I felt were hard to find. This seemed to only affect Ego Draconis and made the game more enjoyable as you had to carefully pick your battles and be more tactical. Later on in Ego Draconis, you can create your own potions, alleviating the problem of health issues entirely (not an issue when you gain regenerative health). This does make progression a little difficult at times but if the normal setting is too hard, you can change the settings in the options while in-game. Weapons and armour are plentiful and you are not just restricted to standard items; you are also able to customise most sets with additional attributes too. Customisation can be done at any point from within the inventory system.

The world in Divinity is quite open to explore, initially you are confined to one or two areas, then you are let loose on the world. Finding your way around isn’t always as clear-cut as going directly from one area to another. You have to chat to non-playable characters regularly that may pass on some valuable insight. On the main map you will find see a scroll which indicates where the next story mission continues and you can set a way-point for the mini-map. The indicator only gives you the general direction of it though and no help is given in getting you there. Not everything is set above ground and there are various caves to explore, also the sky later on when you can change into a dragon.

Interacting with characters has its own uniqueness due to your character being able to read people’s minds. This feature does have its drawbacks, and as penance for using it, you pay with your experience points. Using the feature does come in handy as you not only gain additional insight when doing certain missions, but you won’t always get the info you would expect. It’s also valuable if you think characters are lying to you; the mind hides nothing.

Later in the game you get to become a dragon; this is when the gameplay takes a slight turn and not for the worst. Most games that have a secondary gameplay function usually have it as an extra, and not in a good way. This is where the Divinity excels, with the flight being fluid and enjoyable, easy to grasp and as well designed and thought out as the remainder of the gameplay.

One of the biggest problems with large games is that they usually become boring the further you get into them. Tedious fetch quests and repetitive gameplay are still present, the only difference being there is that much stuff to do it never gets boring. I spent hours doing side-missions and looking for hidden extras while levelling up my character and never really noticed anything tedious thanks to the variety on offer. In the second portion of the game you are more confined within a city but this is not a bad thing. 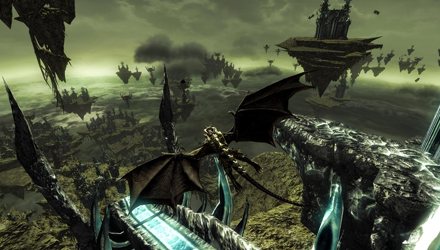 A forest, a tree, whatever next?!
Due to the sheer size of the game, the graphics are not as sharp as what you would see, even in the likes of Fallout 3. Even though this is the case, they are still very nice to look at. Each place has its own look and feel and no two areas are the same. All the character models although similar, still have their own style about them. What makes the world come to life more than anything are the subtle animations of the flora and fauna, which give a feeling of depth and makes the world come to life. Cut-scenes are mostly done with the in-game engine although a couple of them do use pre-rendered graphics.

Thunk, caching, swoosh
One thing that did impress me is the amount of audio dialogue included on the disk. Not everything has an audio component to it, but it’s as close as you can get on a game that is on one disk. It doesn’t have a full star-studded line-up, but it doesn’t matter as all the voice acting works well, and each character has its own personality. The ambiance of the world sets the tone and with all the additional sound effects it’s a game that is easy to listen to. Music tends to stick to the cut-scenes, which isn’t a bad thing as it really doesn’t need it elsewhere.

Ye old adventure
This conclusion hasn’t been a very difficult one for me and not just because I like RPG’s. It’s not very often that a developer goes back to right a few wrongs, having realised that they have made a few mistakes and then tried to rectify them, and this is where Larian Studios have excelled. Not only have they fixed issues that plagued the original port, but by changing the game engine and adding a further adventure to the series, they’ve made this above what the original should have been. Even if you have played through Ego Draconis  before, it’s still worth playing again as it feels like a fresh, new adventure. People new to the series will have no issues with picking up the easy control scheme and hardcore RPG fans will love the challenge with some of the harder difficulty settings.

As far as packages go, this game has more gameplay, fun and excitement than most games in the last five years and is well worth its price tag. With all this said, the proof is in the pudding and I will say if you have read this and still unsure, try the demo on Xbox Live or from the official website and judge for yourself, You won’t be disappointed.