One game that has always been a firm favourite of mine is Mafia. It wasn’t as refined as games like GTA, nor as expansive, but it had a style of storytelling that hasn’t been duplicated in any other sandbox game. Little adjustments to gameplay made it a very different experience, one that I enjoyed. It wasn’t just that which made me like the game, it was the story; which was as engaging as they come. From taxi driver to made man, you became Tommy, you became a member of the Mafia. You did what you could to survive and dish out your own justice.

I never thought in the years to come that it would have ever got a sequel, but low and behold, here it is in all its glory. After playing the demo anyone who read my impressions would have gathered that I was taken back to that original game. I re-entered the world of a made man, but this was different, I had a new character to become, a new era to explore and now I have found out if it lives up to the first game’s legend.

Leave the gun, take the Cannoli’s

In Mafia 2 you follow the trials and tribulations of Vito Scaletta who starts off as a war veteran and works his way up the chain to being a made man. After returning home while on leave from the army, his friend Joe helps him get out of the service. Needing a job to pay off his deceased fathers debts, he sets off on his life of money, crime and putting his life on the line which spans over several years.

The story is well told and makes you feel like you are a Mafioso throughout the game. Each mission is as captivating as the last so it will be difficult to tear yourself away and if you’re a fan of the first game, there are some tie-ins that are easy to spot. The ending is left open ended though which could annoy some players.

Say hello to my little friend
The game is split into fifteen chapters and each chapter requires you to complete certain tasks, after completing the tasks you return to your current place of residence to sleep, this is also where the game saves. You also have three difficulty settings although both easy and normal pose very little challenge. Initially when you start the game, you follow a mission based on Vito’s time in the army which serves as a training mission to show you how combat works. Once that is complete you work your way back to your Mum’s house and you then have some training on hand to hand combat. After that, you are left to start the game proper. 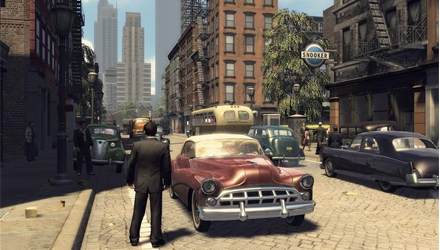 The city is stunning

Weapons combat works very well and Mafia also incorporates a cover mechanic. Unfortunately you can’t switch from cover to cover and you can’t blindfire from behind the cover either. This isn’t a bad thing but the option would have been nice. Hand-to-hand combat is a mini-game in itself; using a combination of heavy and light punches plus dodging and countering attacks. Once you have done enough damage to your opponent you can execute a finishing move. This part of the gameplay is like playing a boxing game, although simplistic and rewarding. Bouts are taken on one-on-one although occasionally you will have to defeat several opponents one after the other.

Driving in the game is similar to most sandbox games. Initially you can’t steal cars until you receive a set of lock picks during a mission; at that point you have three choices of how to acquire cars. The first is to pick the lock of a car; which is a short mini-game where you have to open the lock tumblers. The second would be to smash the window of a locked car (this being the quicker option) the last way is to carjack someone. If at any point you are witnessed by the police, your car and you will both be wanted and you will have to escape from the police. Lose the car and you will still be wanted, the fastest way to lose your wanted level would be to find a garage and change either the colour of your car, or the licence plates to legalise it. While in a garage you can change the rims on your car and also upgrade it to make it faster.

While driving around the city you can put on a speed limiter, this means that you won’t attract the attention of the police by breaking the road rules or driving dangerously. This doesn’t stop you from getting arrested though, and getting into a car accident in front of the police will make them chase you down. Each car has its own attributes and any you wish to upgrade or keep can be stored in your garage. You can store up to ten cars and you may also repair your car from here too.

As I just mentioned, when you’re in a car there are a couple of ways to get arrested. Likewise, when on foot it’s also possible. Besides the obvious option of runnnig around shooting civilians and police, you can also rob shops to make the police chase you. If this happens you will need to change your own appearance by entering a clothes shop and buying some new threads. If at any point the police catch up to you and try to arrest you, you have two choices; the first is to pay them off or you can make a last stand. If you pay them off they leave you alone, if you make the last stand you will most likely die and go back to an earlier checkpoint (no respawning by a hospital without your guns in this game). 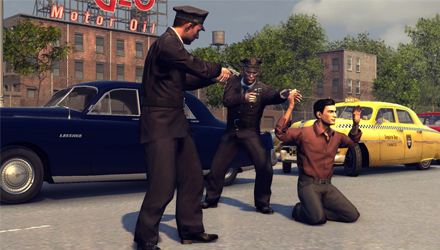 Choose, last stand or pay them off!

As I said earlier you have fifteen chapters to work through in total, unfortunately this is all you have to amuse yourself as there are no side quests to complete and no free roam mode. When you complete a mission you gain money, the amount varies depending on the job. The only other things you can do are to steal cars and sell them at the scrapyard or the docks, or go collecting the playboy centrefolds and wanted posters scattered around the city.

The AI isn’t anything special but it isn’t bad either. Some enemies do try to flank you although occasionally they can run around like headless chickens. Most tend to stay in cover but are easily killed, I would suggest playing the game on hard though. The police can sometimes be a bit stupid and occasionally don’t chase you when they should and I don’t think they know how to reverse when in cars as several times I ran a car into the back of another and they made no attempt to go backwards to continue the chase.

Personally I enjoyed the missions, I spent around twenty hours playing the game and even though I didn’t have any side quests to complete I didn’t mind it. I did collect some of the playboy magazines too, although I didn’t go out of my way to find them, only some are in missions so exploring a little while you are playing is a must. Gaining more money is something that I had expected to be straight forward but a couple of times in the game you do lose everything you have worked really hard to get, this includes any clothes that you have purchased and all your money. At the time I was a little annoyed but it was relevant to the storyline, so losing it made sense.

I know it was you Fredo, you broke my heart
The city itself has been well designed and each building has its own architecture, depending on its location. All actions are animated and each character seems to have their own personality. Even the non-significant characters have the same high quality detail as the main characters. As you progress through the game, the city seems to change and evolve over time. Each car is detailed and each is individual. Wear and tear is also detailed and this includes damage to the car from bullets and crashes. The cut-scenes all use the ingame engine and this keeps with the consistency of the game. Unfortunately there is some screen-tear in parts like in confined spaces and you notice it more when you turn the camera. This could be down to optimisation.

It’s a Sicilian message. It means Luca Brasi sleeps with the fishes.
The audio is well composed and fits the time period that the game is set in. Each character does have their own personality and they do come to life. The music on the radio stations changes depending on where you are in the game and the further forward in time you get, the more modern the music will become. All this really sets the atmosphere and my only criticism would be that half of the game is swearing every other word. This may have been done to keep the Mafia feel but in the time period (1940s and upwards) swearing wasn’t as common or done in public. This I felt was unnecessary and the game could have been done with no swearing at all. That said, it is well voice acted and although a little crude at times, it can be quite funny.

I’m gonna make him an offer he can’t refuse
All in all, with the criticisms I have for the game, Mafia is a well rounded experience that keeps you both interested and entertained. It really pays homage to the first game even if it isn’t perfect. If you have small children, especially ones that are learning to speak then I suggest you play it when they are not about. Other than that, the game is worthy to hold the Mafia name and worthy enough that it should be in your collection. It should keep you entertained enough for multiple playthroughs and the atmosphere it creates makes you feel like you are Vito. GTA could learn a thing or two about storytelling from this game. This is the Godfather game you wish had been made.