On the world stage, 1994 was a memorable year. O.J. Simpson lost a police chase, Kurt Cobain blew his brains out and Commodore Computers went bust. This was also the year of the Rwandan genocide, an event all of western media could not care too much to cover because they were too interested in mourning Ayrton Senna, Richard Nixon or watching Friends. Whilst 1994 past me by without too much excitement, there were two key moments of that year. Firstly, in my mind, Graham Taylor was a cock for leaving England but mere spectators for USA ’94. Secondly, and more relevantly, it was the time I spent hours that year at my friend Andrew’s house, before school, playing the coolest game on the Sega Mega Drive; NBA Jam.

Back in ‘94, NBA Jam was gaining major plaudits for its arcade gameplay, slick presentation and superb commentary. Quotes such as “He’s heating up!” and “From downtown!” have stayed in my mind for over a decade, right until this day. Those last ditch Shot Clock moments where you somehow sink a three pointer from the other side of the court still sit with me as being one my most treasured gaming memories of all time. NBA Jam has had a few releases since the iconic 1994 release, but it’s not been until recently that the game has once again captured the quality of its heyday.

NBA Jam ’99 and the 2003 self-titled reboot were games that rubbed a dirty sanchez on the face of that once hallmarked name. The 2010 release redeemed NBA Jam’s reputation to a degree, but a disc-based release of that game on today’s digital downstream just did not make a great deal of sense. EA, however, have decided to release NBA Jam: On Fire Edition for digital download and we have the game in front of us.

Will it expand and improve upon the almost faultless 1994 release or will it do a Graham Taylor and cock it up?

Forget realism. NBA Jam isn’t interested in it and it never has been. On Fire Edition keeps to the natural roots of the series’ beginnings, leaving the game in its side-on perspective and is all about crazy two-on-two basketball. There is a huge emphasis on skillful moves, over-the-top dunks and breaking every rule of physics. While NBA Jam never had many game modes, OFE follows the same simple but addictive qualities that the series has garnered a reputation for.

The game consists of all thirty major NBA teams, with the usual star players synonymous with the world of basketball. Even with EA’s access to licences, the game does not go down the avenue of realism or simulation (but it certainly has the roster to add to its bank), so if you prefer your bounce with super realistic TV visuals, you are better off with the 2K series. 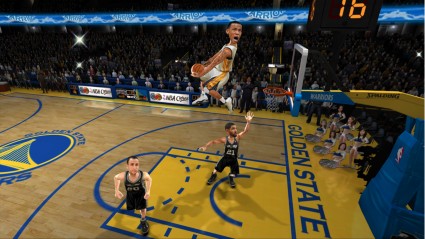 It’s a road map to success!
While OFE essentially specialises in a two-on-two game of basketball, it does give you numerous game features. From head-to-head, Road Trip (a cooperative career mode) and a multitude of unlockable, game-changing features to buy in the Jam store, there is enough content here to keep you going for the 1200 Microsoft Point asking price.

The campaign has you travelling around different American states playing thirty of the NBA’s finest. The more matches you play, the harder the opposition becomes thanks to EA’s REAL A.I. engine, which learns the way you play and forces you to change your approach the game. On single player, the career mode can be feel a tad stagnant but playing co-op makes it a much more fulfilling experience.

As you play matches, you will earn Jam credits and these can be spent in the store to unlock classic players, online gamer card customisation, nicknames and even different balls or effects to change the visual look of the game.

NBA Jam: On Fire Edition reintroduces the formerly absent Tag Mode & Team Fire features by allowing you to switch between control of different players. This can be used to chain both of the players on-fire at the same time and visual eye-candy ensues while the points keep rolling in! 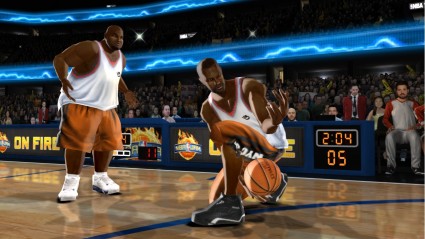 Who ate all the pies?

For those not familiar with the series, to put it simply, NBA Jam is fun in abundance and it’s so easy to play. You time your shots with a button press, use some common sense and providing you are unmarked and not too far away, you a pretty much guaranteed some points. You can skin players with side-steps, spins and you can even fake to trick players into blocking while you go for the three points.

While the game is arcade by nature, it has a great sense of depth that will have you being strategic on defence, leaving you to learn when to block and when to go for the steal. Don’t expect to see this game feel outdated in twelve months either; EA will be updating the rosters online, releasing more players and adding new content regularly.

As colourful as Dennis Rodman’s barnet
With the bold, emphasised characteristics and exaggerated features, OFE doesn’t wish to associate itself with broadcast TV visuals or the simulated avenue. It likes to accentuate the noticeable features of some of the NBA Stars and put a slightly visual humor to them.

It’s one heck of a sexy game, though, full of colour. Every stadium is beautifully recreated, from the crests of team to the different coloured courts, right down to the finer details like the stands and basketball nets. Some of the game’s unlockables enable you to change the look in gameplay, from options to play in black & white to playing with bowling balls or old pieces of rock, there are lots of variables here. The NBA starts have been beautifully recreated in NBA Jam’s own comedic style and the 2D faces on 3D models serve for an interesting art-style. 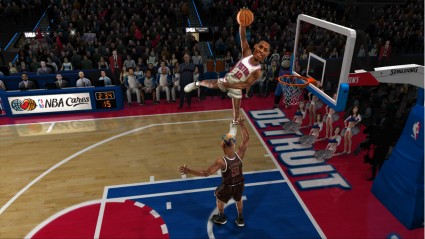 Smile! You're on camera!

Nothing in OFE looks bad, it’s not exactly hard to give OFE a good image. That said, it has a lot more horsepower that it could technically play with, but the game is not interested in doing that. It’s only interested in faithfully recreating the magic the original game had and improving upon it. It’s definitely done that.

BWARK! Goal Tending!
If there was ever a memorable aspect about the 1994 edition of the game, it was the commentator. After all, back in 1994 we were only getting used to hearing commentators throw out a list of reactions to movements. It wasn’t just the thrill of the tech being used in play, it was the quality of the commentator itself.

OFE brings back a similarly styled commentator, this time with a much more expansive repertoire of funny quips and street style action coverage. It’s all entertaining and drives home the style and vive this game is attempting to get across.

Don’t be surprised to hear a few grunts, flames, whooshes and aircraft propellers; sometimes random sounds signify some of the audacious maneuvers performed by the NBA Stars, to flaunt and show off their aggressive dunks on the hoop.

As you approach the silver medal levels and face off against team mascots for opponents, the reward for playing the game long enough starts to show through. Seeing a chicken jump through the air before setting a hoop on fire is hard to get boring. Am I right, or am I right? Right?!

Funky electronica and jazz beats provide a smattering backing track, and while the game doesn’t utilize EA’s big artist bank, it serves well to create a hip and fresh accompaniment to one of the coolest games on XBLA and PSN right now.

It’s all about the double team!
What OTE does better than any other Jam game is open up online and offline cooperative play to a complete season mode. I said earlier that playing with an A.I. team-mate detracts from experiencing and enjoying the full scope of the career mode, and it does that substantially. Grab someone locally or online and, suddenly, a generically structured career mode becomes completely addictive. 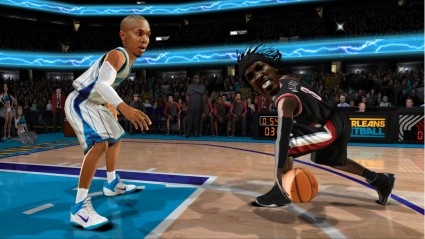 The Jam Arena brings a more competitive element to the basketball experience. The ability to go head-to-head or cooperative against your opponents can be a tense experience, especially at the end of each quarter where every point counts. If your second human player drops and has to be replaced by an A.I. player, then the game will use a balanced A.I. matchmaker system that will match the skill level of the human player. Clever? I think so. In the Jam Arena you also have a number of days to clock up X amount of wins to be given certain statuses, however the main ranking system applies globally when playing the game in general.

Online play has been a tad hit and miss with connectivity. If the matchmaking system connects you locally for a game, you’ll be totally fine. As soon as they start throwing you transatlantic then problems might start to appear, with major lag issues rendering the game unplayable. I rarely had too many issues, but if the servers were ever to become a dead town, then this could be a real cause for concern unless it’s addressed.

Three-points to EA!
What a resurrection of the series! The past has been rekindled. From the satisfying crunch of a connected alley-hoop, to the punchy visual style, EA have created a cracking game of basketball. It’s brought back the spirits of 1994, thrown them into today’s technology and expanded upon what made the original so damn good! If you are a fan of the original, then you must buy this game. If you want to play a basketball game that doesn’t require much learning curve, then you must buy this game. In fact, if you love sports games in general, just buy this game because you will not be disappointed.