Portal 2 has been one of the most anticipated games in recent history, and with so much hype around the release, James ‘O’ looks at the sequel to one of Valve’s most popular games ever, the genre-revolutionising Portal. Released on PC, Xbox and PS3 back in April, Portal 2 is a great example of how a small game like Portal can grow up and stand on its own two feet against other behemoth titles in the gaming industry.

A Portal in to the world of Portal 2.

Portal 2 takes place in the aperture science facilities we grew accustom to in the first game, only this time, the facility isn’t as shiny as before. The protagonist of the single player campaign is once again Chell, who was (after a patch before the sequel’s release) unluckily dragged back to stasis at the end of the first game after defeating GLaDOS. Chell is eventually woken up by a robot companion called Wheatley (voiced by the incredibly talented Stephen Merchant) just in the nick of time, as the room she has slept in for hundreds of years is about to be obliterated.

Wheatley saves the day by moving the room in an immersive cut-scene, before guiding you through an escape route. On the way to escaping, Wheatley manages to direct you to the area containing GLaDOS’s remains and one way or another, re-activates the robot that is so hell-bent on testing all the time. Rather than kill you outright, GLaDOS takes sympathy on her murderer, by forcing her back to testing, only to fiendishly be producing deadly neurotoxin to exact her revenge on Chell once sufficient testing has been done. 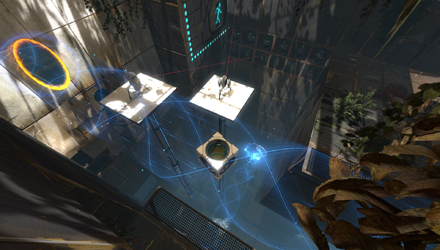 Confused? Welcome to the world of Portal!

Solo fun with science
The single-player at the core is a puzzle game that almost takes elements of an action adventure game at times, with sequences where floors are falling away from you and the whole environment is collapsing on its self. The first thing to note about the single player campaign is that the name and appearance of the character you are controlling always seems very arbitrary, since the game does its best to interact directly with you, the player. This leads to a way more immersive game, as you really end up feeling that the world is interacting with you, rather than a character who’s back story has been predetermined by the developers.

The concept of having essentially a shell of a character (pun intended!) as the protagonist really allowed the developers to let their gameplay mechanics be the focal point of the campaign. This is a refreshing change in first person gaming, since the general way first person games are made these days is by adding some ridiculous back-story that we’re meant to care about, followed by massive explosions and the other characters complaining about being one day from retirement.

Portal 2 is a strange game in the way that it can make you feel both smart and really stupid in quick succession by having a mix of easy puzzles and brain-fryingly complex motion puzzles, which involve nearly every different mechanic in the game. Sometimes there are so many components to each puzzle that it takes a while to figure out where to start, only to find half way through the puzzle that you’ve done it completely wrong and are either stuck in a seemingly never-ending loop of portals, or are on a very fast one way trip to an apparently bottomless pit. The frustration is usually short-lived, as either through trial and error, or just looking around, the puzzles turn out to be deceptively easy, which is where it making you feel stupid comes from.

The way the developers have counteracted this feeling of stupidity, is by making puzzles that at first look like they are complicated, when in fact a child could easily work the puzzle through the first time. Rewarding feelings in games have been few and far between in recent years, and it’s great to have a game cause you to feel something other than the “Holy Sh*t” feeling that adrenaline pumping games give you.

A huge mention has to go to the addition of the character of Wheatley, an inclusion that raises the bar from Portal to Portal 2. While similarities of  the character design can be drawn to Guilty Spark from Halo, that’s where they stop. Wheatley adds so much to the game, from the hilarious conversations with GLaDOS to the excellent comedic timing; it’s hard to imagine the game without Stephen Merchant’s character. I’d go out on a limb and say that the inclusion of Wheatley is one of the main factors that not only makes Portal 2 superior to Portal, but also makes Portal 2 one of the most enjoyable, and perhaps best games that I have played in recent memory. 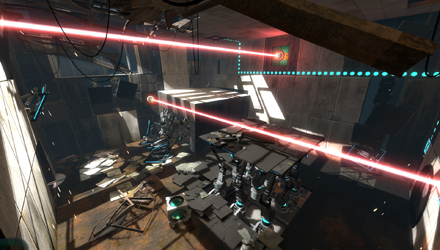 The graphics of Portal 2 really stand up to the test!

Orange vs Blue…
Portal 2 at heart is a PC game (sorry console guys!) so naturally, the PC version has to be accessible to all range of PC systems. While you aren’t greeted with graphics that require a top-end system to play on full, like Crysis 2, it doesn’t mean that ramping up the graphics settings to max doesn’t greet your eyes with stunning visuals of the environment. Speaking of which, the run-down facility shown in the opening cut-scenes is graphically impressive because of the detail of the rust, plant growth and general neglect of the Aperture Science Labs over the years.

As the game progresses and GLaDOS manages to restore the facility to its previous state of shininess, the engine uses brightness levels to separate aspects of the puzzles that can be used to those that are merely there to keep the elements out. From the portals themselves, the different coloured goo, all the way to the kinetic transporters, the pieces of each puzzle are all bright and eye-catching, perhaps to distance the game from more serious first person games, or just to make it easier to identify the mechanics.

Hearing tests
I’m a stickler for good sound. Great audio is often overlooked as a reason for an immersive game, and Portal 2 doesn’t fail to deliver in this aspect either. The sound can really be split into two aspects; sound effects, and voice acting. The sound effects in the game are spot on. It’s clear playing through headphones that each sound resonates perfectly depending on the size of the chamber you’re in, with huge booming sound effects in the larger rooms being a treat to hear echo off surfaces way in the distance. It’s clear that each and every sound effect has really been thought about during the design process, and this really translates into the quality of the final product.

The voice acting is a really strong point, and I couldn’t praise enough. As I mentioned earlier, Stephen Merchant adds so much to this game through his voice, but Valve have managed to balance the comedy with the puzzles superbly by having Wheatley disappear from time to time, leaving you to get back to testing alone, only to have him explode back twenty minutes later with an escape route out of your current puzzle. The never-ending battle of words between Wheatley and GLaDOS escalates throughout the campaign and really makes the game a delight to dedicate time towards. 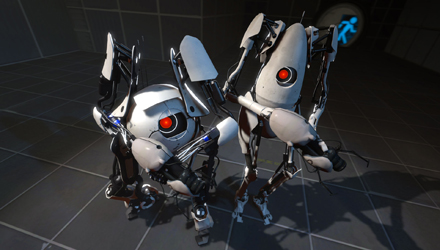 Testing with a friend is fun. So is firing them in to lasers and crushing them with puzzle components!

Group studies!
If the single-player wasn’t enough, Portal 2 also contains a full two player campaign to work your way through. P-Body and Atlas are the two robots unfortunate enough to exist only to be tested by GLaDOS for eternity, and like Chell, have very little character development to speak of. The Portal 2 cooperative mode is almost every bit as good as the single-player campaign, only really lacking the comedic timings of Wheatley. The replacement comedy, or frustration in some places, comes from the interaction between the players, and the inevitable miscommunication and breakdown of teamwork.

Some sequences in the two player mode are clearly made for voice commands, and are also there to be failed once or twice to make you laugh at the other player’s misfortune. One such puzzle, turns the game into a platformer for one player, and the other is controlling whether the platforms are moved up or down. Needless to say the first try, my partner got crushed when I stepped on the wrong button, raising his platform in to the ceiling.

Revenge is easily obtained in what is essentially a mode designed to make for a dysfunctional stay in the Aperture Science Facility, by “misplacing” a portal to send your team-mate in to certain death. The sense of reward and stupidity carries over in to the multiplayer, and combining that with the complexity of some of the puzzles, makes playing Portal 2 with a friend a very enjoyable experience.

Test completed!
Portal 2 is going to be a difficult game to knock off the top of my games list this year as it managed to tick so many boxes for me. My only complaint about the game is that the end seems so final that it doesn’t make sense to me for them to write a sequel, which is a brilliant problem to have. If you can manage to produce a game that makes people want a sequel and beg for more content, then you have done a brilliant job in my eyes. I sincerely recommend that you go out and buy it now if you haven’t already… No really, go and buy it now, I promise you won’t regret it!