What do you do when the world is threatened by the might of an evil super villain, who has nothing better to with his time than to systematically destroy the world and all life on it? The answer? Well, according to the leaders of the world in Renegade Ops, the answer is actually very little. When that threat is the nefarious Inferno, it seems like he really doesn’t mess around. However, you can set your fears aside; General Bryant isn’t going to take this one lying down.

Instead, he is going to amass a team of specialists (‘Renegade Operatives’, if you will), and hook them up with enough weaponry and destructive power to leave the enemy begging for them to stop. With his crew by his side, it is time to take on Inferno and make him pay for ever thinking about being a party in the destruction of the Earth.

Mission briefing
This title is brought to you by the developers of the Just Cause series, which as you have already guessed, means that the game is packed with more action than you can shake a stick of dynamite at. Using the in-house Avalanche 2.0 engine might give you a little bit of an idea as to what the feel of the game is going to be like. Despite the familiar engine, this is the first time that Avalanche have taken a swing at the twin-stick shooter genre. So, what makes them think that they are going to be able to stand out from the crowd with a style of game that has reached near-saturation on this generation of consoles? The answer is simple really… 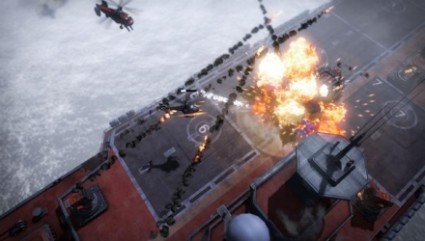 Mission Impossible
Usually, you will find that games like this have little more to offer than a score multiplier and some multiplayer. Renegade Ops, however, has more depth to it than that, even going as far as to bring in a levelling system with upgrades. Starting on easy (as I did, because I am not very good at this kind of game), doesn’t even begin to scratch the surface of what Renegade Ops has to offer.

Once you push yourself onto the harder difficulty modes, you are given access to the real meat of the characters. Now when you are playing you can gain experience, attain score multipliers by killing multiple enemies without being hit, and level up your character. There are four different characters to choose from, each with their own special abilities. Armand has a shield, Roxy can call in an airstrike and Diz can create an EMP. The last character is the one I played most frequently as, Gunnar; for those of you who haven’t quite cottoned on to the pun, he is the gunner character for the game. Pretty funny, no?

Using his heavy gun ability leaves the enemy forces torn to pieces, but you have to wait for the cool-down on the weapon to use it again. As well as your character’s special abilities, you can upgrade the standard machine using drop-boxes from the levels, and even gain further weaponry such as rail guns, flamethrowers and rocket launchers. The combat varies from driving in ground vehicles to flying helicopters, adding yet another level to the gameplay.

The difficulty levels are certainly accurate in terms of how hard you are going to find it. As I stated before, this is not a genre of game I am usually good at, so I started out on easy. In all honesty, I actually found it a little too easy. However, the trade off for this is that you can’t upgrade your abilities, meaning you are always of a similar power level. When the enemy are weak, though, this is less of a concern. 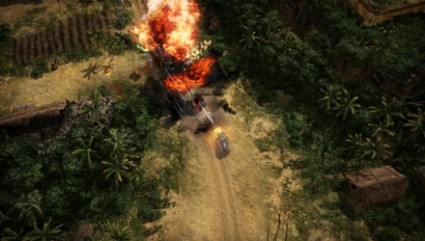 Target in sight!
If you have any familiarity with the Just Cause series, then you will more than likely have a clue as to how this game looks. The lush, expansive environments filled with incredibly detailed destruction and amazing explosions are a pleasure to look at. Considering this game is looking down from a height, the level of detail present is actually above and beyond what you’d expect.

As an addition to the in-game graphics, the cut-scenes and menus are a stark contrast, using comic strips rather than the in-game art style. As a big fan of the motion comics of yesteryear, I couldn’t have been more impressed with the look and feel of the cut-scene animations. It adds another layer to the amazing Americana feel that the game evokes.

Sometimes at night I can still hear the screaming
Machine gun fire? Check! Rocket Launchers? Check! Explosions? Check! Typical, yet hilariously well-represented voice acting? Double check! For all this game needs to do in terms of audio (which, let’s be honest, is very little), it once again manages to come top of the class. The combination of all the weaponry sound effects pulls you into the world, with its constant and relentless presence. There is barely a moment where you aren’t bathed in the sounds of carnage, and with a good speaker system, this can feel pretty awesome.

The voice acting is like something out of an old 80’s action movie; it’s full of bravado and takes cheesiness to the max. It is very obvious that the game is aware of how ridiculous it is in terms of story and acting, so it has fun with it. If I had one slight issue with the game, it’s that the musical score is a little bit lacklustre. It’s nothing out of the ordinary, and in fact barely noticeable. It isn’t that the music isn’t any good; it’s just that it doesn’t fit with the rest of the game’s attempts to step out as something new.

Sending in back-up
The multiplayer in the game comes in two different flavours: local and online. I do find it refreshing when developers make time to include a local component to their multiplayer. We do live in the day and age where you should be on the internet and find a game, but sometimes it is nice to have the other players in the room with you.

There is no separate campaign to the multiplayer; you are just playing through the single player one. If you thought this was a little difficult before, then you may be pleasantly surprised by how much easier it is. With four characters stomping around a map, you can steamroll entire levels in half the time you can on your own, and it breathes new life into the campaign if you have already completed it solo. 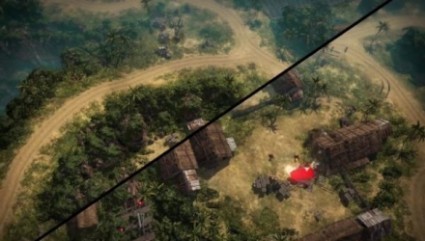 You go this way; I'll go that way!

War… war never changes
Just like General Bryant and his team, it is quite clear that the guys over at Avalanche have come out all guns blazing with this one. After the success of Just Cause, I thought it quite interesting that the next step for Avalanche would be to make a downloadable game. My intrigue has been met with something that has further cemented their position as one of the best action game developers in the business today. With a ridiculous story line, over-the-top characters and more explosions than your average Michael Bay film, Renegade Ops is an exciting addition to the genre and an absolute must have.