As you may know from our podcasts, Japanese RPGs have always been an obsession of mine so when I heard that the next Star Ocean was coming to the Xbox 360 as an exclusive, the title was immediately placed on pre-order. Having played a couple of the previous titles I was hoping that this prequel would live up to the name. For the next 65 hours I was to battle enemies across the ‘star ocean’ and save the earth from certain destruction. With this being the third title that Square Enix has brought to the Xbox 360 and being a 360 exclusive, this game has a lot to live up to with the various technical failings of Infinite Undiscovery and The Last Remnant. The biggest question would be: ‘Is this game worthy to enter your collection? Or is it destined to stay at the store?’

Venture off to the stars
Star Ocean is set in space after a 3rd world war. The human race is venturing off into to space after a nuclear war has left planet Earth devastated, destroying a lot of the population. A cease-fire is negotiated between the warring parties and humans are now trying to survive living underground. Technology advances and a new group is formed, as part of the SRF (Space Reconnaissance Force) you follow the life of a few individuals as they embark on a new mission; to find a new home for the human race by travelling to new worlds and meeting new races, forming friendships across the galaxy. The main protagonists are Edge Maverick and Reimi Saionji and as part of the SRF they initially set out to find that potential new planet for humans, but as always; things don’t quite go according to plan. 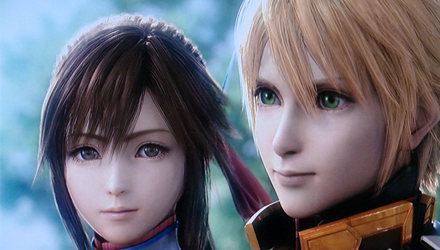 Edge and Reimi our heroes

Get your sword in your hand… lets play!
The controls are very simple to get to grips with but there is a slightly over the top lengthy tutorial at the beginning if you need it. The battles are not strictly turn-based like you would expect from this type of genre but more of a cross between that and an active battle system with the ability to stop the flow of time to give commands to the other characters. You can control any of the characters at any point during the fights and switching between the characters is just a quick push of the RB or LB buttons. You can only have four characters in your main party but at any point in the game you can switch a character from your main party into your battle party. As you battle you have basic attacks and are free to move about the battle ground and attack any enemy. You can dodge from enemy attacks like you would see in a hack and slash game, making you switch between offensive and defensive modes and making each battle a tactical event. You can learn special moves and powerful combo attacks the higher you level up. There is also a ‘rush mode’ that you can activate when the rush bar hits 100%, which makes it impossible for your character to get knocked down. You can combine this rush mode with a special attack unleashing a devastating array of combos in a quick-time style event making battles fluid, especially against bosses. Each character has battle trophies that you can collect by doing certain things in each battle. 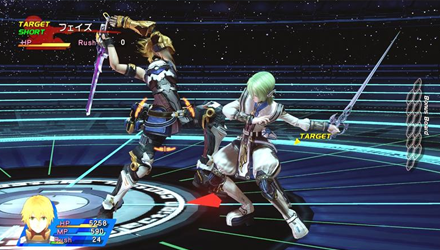 Unlike most J-RPGs random encounters are not a factor and monsters appear on the map as you run around so you can pick and choose your battles. Bosses normally come after a cutscene and this would be where tactics come in. If you try to hit the hell out of a boss you will lose very quickly, a tactical approach is key to finding out their weaknesses. The areas that you travel around are well designed and varied, the lavish scenery makes you want to explore a lot more but at times some of the maps can feel a little linear. This isn’t a bad thing though as the maps are really big so there is plenty to do.

The remainder of the gameplay is what you would expect from any game in this genre; lots of side quests and a lot exploration. If you ever get lost all you do is talk to the any of the characters nearby and help will be given. There is always something to do and places to explore.

There are 3 ways of levelling up and you earn experience not only for battling but also for opening chests and completing missions. Your characters level up automatically as normal but you also earn xp for special moves. You can upgrade these moves separately and choose what you want to upgrade to the next level. Finally there is ‘BEAT’ (fighting style) this also levels up automatically but provides you with bonuses in battles and there are 3 ‘BEAT’ modes to choose from providing you with different battle bonuses. There are several difficulty levels that you can unlock upon each completion so there is always a bigger challenge on your next play through.

The only downside to the gameplay is when you get near the end; if you want to go back to one of the other planets to do some grinding or have a go at the arena then you have to change disks. It’s really not a big hassle but disk swapping is a must in order to do some of those side quests you missed.

Hey good looking!
One area that Star Ocean excels at is graphically, with each of the characters rendered to perfection. The scenery is beautiful and the towns are full of life, although in some places you just wish that there was more as most of the NPCs seem to be nailed on the spot. You can tell that the time has been taken to create an immersive world, and visually all areas are very well polished. The cutscenes are all in-engine so there is graphical consistency throughout, with the only letdown being that some of them are a little lengthy (at one point my pad switched off twice). 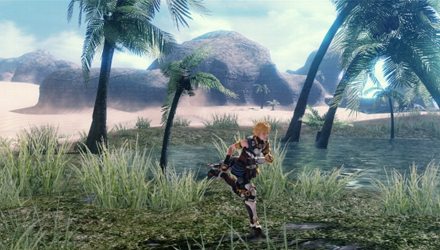 Im lost! where was that desert again!?

If she says ‘kay!’ one more time I will kill her!
The score on offer is your typical J-RPG affair and changes upon location and situation.  The fighting sound effects are spot on, although as is the case in these games it is quite repetitive. Some of the characters voices seem a little wooden and two of them are more annoying than Cooke and Mack from Lost Odyssey but aside from that they are mostly well voiced and will keep you entertained rather than annoyed.

Should I get it?!
Aside from the few niggles the game has a lot to offer and is definitely value for money. Just the sheer volume of content spanning those three dvds makes this a worthy addition to the collection. With well over the 65 hours that I put in, it should keep you occupied for quite a while. If you’re a fan of J-RPG’s then this is a bonus and you will have a lot of fun, if you’re not then it shouldn’t make too much of a difference as the game is very fast-paced and action orientated, so you should find something in there for you.