I’ve never really been a fan of the Nintendo Wii; it always seems to disappoint me with its games and playing techniques. I see the Wii as a toy or a gimmick, but not actually as a proper gaming console. It does however have its fair share of good games, such as Super Mario Galaxy and the basic Wii Sports that comes free with the console. All the other games seem to be either bad ports of other console games, remakes of older Nintendo games, or just plain pointless and shouldn’t even be classified as a game. However, I have come across one game that I feel works really well with the Wii’s game engine and really makes the gaming experience more intense. This game that I bring before you all is High Voltage Software’s The Conduit.

It’s the beginning of the end… literally.
The game is set in the near future. It still has references to modern day events and places, but also has an alien futuristic side to the game with new technologies and weaponry. You play as Michael Ford and you are set out to destroy The Drudge before they invade Washington, D.C. Michael Ford is then enlisted by a shadow government organization called The Trust to, initially, disrupt the terrorist threat but soon gets caught up in the fight to save the capital from destruction. You start the game recovering from a blackout in the middle of a derelict subway full of The Drudge. You have all the weaponry and items and can very easily kick some alien ass. Just when you think you are getting somewhere the screen fades and it says “5 days earlier” and it makes you into your average Joe with just one gun. You then play through the whole city-protecting story until you reach the moment you were at in the beginning of the game. Then it gets really hard.

Configuration Confused
The gameplay, to me, was a little hard to grasp at first, as the buttons on the Wii remote were slightly hard to reach. Apart from being spread apart, the controls were pretty easy to get to grips with. The nunchuck has a very sensitive control, too. To throw a grenade you have to flick the nunchuck forward, but due to it reacting to my slightest movement, I have found myself accidentally throwing them due to scratching my nose or adjusting my seat position. Putting this aside, the rest of the control system was spot on; this game was truly built with the Wii in mind. Another unique aspect to this game is what’s knows as the All-Seeing Eye. This is used to hack into computer systems, find secret passageways and messages hidden on the walls. It also uncovers stealth Drudge from their invisible armour.

You bring up your ASE using the + button, aiming is pointing at the screen and moving is with the nunchuck stick, just like your basic shooter. To change you weapon you use the arrows, but the most awkward is your pause button. To pause the game you have to press 2, which is all the way down at the bottom of the remote. The way the game is paused is possibly the most fustrating issue. While playing, my phone rang, and naturally I wanted to pause and answer it. Unfortunately, to pause I had to move my thumb off the A button and tilt the controller so that I could reach the 2 button. This resulted in my aim going off and getting shot just before I paused! Then after un-pausing I had to get back into the position I was in and the frustration went on. On a lighter note, aiming the cursor is a hell of a lot easier than Call of Duty: World at War’s aim system for the Wii. 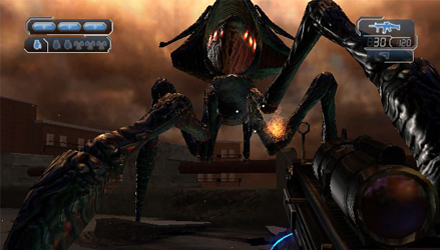 Oh look, it's War of the Worlds!

Michael Ford is Master Chief!
Whilst playing the game, it reminded me of a few older games I used to play. The Conduit felt like a cross between Goldeneye and Halo 2 with a bit of Metroid Prime 3 thrown in there for good measure. A lot of people don’t like the way Nintendo went with their graphics, including myself. They stopped at the Gamecube, and didn’t seem to progress. However, The Conduit seems to improve on that slightly, especially playing through HDMI. High Voltage Software has spent the time and effort to iron out little graphical issues and bugs and the textures are beautiful and shiny. The only bugs I noticed were because my sensor bar is next to my window, so when the sun shines in the connection gets interrupted.

The cut-scenes in this game don’t exist. What you have instead is a Metal Gear style videophone section with text underneath. This can easily get annoying because you can’t skip these “codec moments” either. Everything else about this game was sweet as a nut. The story flowed nicely, all the scenes were nicely pieced together, the secret messages on the wall gave you subtle hints to the grand finale of the game, and when you get back to the subway from the beginning of the game, you feel like you have achieved something; you feel like it’s the end of the game.

A little word of advice, never presume you’re at the end of a game because nine times out of ten, you’ll be wrong. 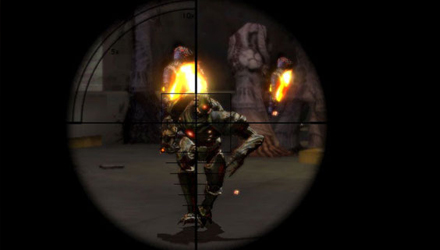 Could do with more tracks.
This game has a very definitive theme tune, and you always know when you’re at a critical moment when you hear that theme. It is, however, played a little too much in the menus. I didn’t notice much more music in the game apart from the main theme. All I noticed was a variation on the main theme, and your basic atmospheric music used in all shooter games.

The sound effects for the Drudge weaponry are certainly unique. My favourite is a gun called The Shrieker. Every time you fire a bullet it makes a sinister screaming sound, like a shriek (maybe that’s where the name came from). The Trust weaponry I can’t make much of a comment about The weapons may be named differently, but they all have the same properties as guns of today. Some are even very similar to Halo weaponry. One of the Trust weapons is called The SCAR and it has the exact same properties as a Halo Battle Rifle; three round bursts, zoom mode and similar sound effects. I do love the sounds of the ASE too. When hacking a computer, it makes an electrical recharging noise, sounding like it’s about to blow up. Then, just as it finishes, it makes a slight pop noise.

Involve the community
My all-time favourite part in the whole game has to be the multiplayer mode. The matchmaking is a little slow, but the process it goes through is fantastic. Every time I played I was matched with people who were actually at my skill level, even if they were ranks higher due to XP. It also determines your skill level by how many kills you get per game, then it matches you based on similar statistics. The map choosing, weapon set and game mode is not chosen by the servers like Call of Duty or Halo, but is chosen by the players. Each player votes for a map they want to play, then a weapon set and a game mode, and when it’s time to play, they are all shuffled and randomly picked out of the votes we chose.

Most of the time the one with the most votes gets picked. You can also choose where you want to play; either regional or worldwide. Worldwide gets you more players, but it’s always fun to play against people in your area. During gameplay, I did experience a few lag issues where people would seem to teleport from side to side. Multiplayer also features Wii Speak capabilities. I do not have Wii Speak myself, but I know you can communicate with other players through this peripheral only if you have exchanged friend codes and you are on the same team. 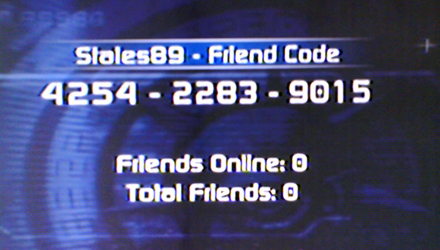 Go on, you know you want to!

Final thought…
In conclusion to all this, I thoroughly enjoyed this game. It’s by far one of the best Wii games ever made. You may disagree or say Nintendo isn’t for true gamers, but with more and more games coming out with this style of gameplay, the Wii could really take off with the more elite gamers of the world. The Conduit is a definite purchase if you have the Wii.