For years now, I have been entertained by Team 17’s Worms. Back in the early days of PC gaming, Worms was my go-to game; all my friends would come round and we would play the multiplayer by taking turns on the mouse, creating teams of worms with hilarious (and sometimes rude) names. After years of producing 2D games things were beginning to get a little stale, and in the early 2000’s Worms took the path taken by many games of the era, and made the jump from 2D to 3D. Now, in 2011 those 3D worms are back…

For those of you who have never played any of the Worms games before, it is a turn-based strategy game with absolutely ridiculous weapons and crazy landscapes. Haven’t played Worms in three glorious dimensions before? Not really a problem, thanks to the tutorials included to teach you how things work. Things are a little different with the addition of the extra dimension, plus you spend a lot of time spent in the first-person perspective, so the tutorials are a very welcome part of the package. 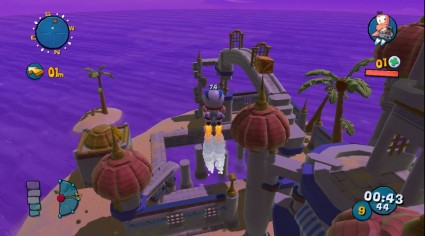 Campaign steps up to bat
So what does the single player have to offer here? Not just one, but two campaigns are ready for you to play. You get the newly created story mode that is the standard affair of Worms gameplay with slight plot implementation, and a revamped version of the Worms 3D campaign. A lot of content to be sure, but it is all the same essentially. For both of these you play your way through a story book of scenarios, from stealing builder’s tools, to blowing up graves to find treasures. In essence, you use the same weapons and mechanics as you do in battles with other worms to perform slightly more mundane tasks.

As well as the two story modes you can play through, there are two challenge modes available. One has been newly created for the game and the other is a remake of the Worms 3D challenges. As you can probably tell with this so far, you are pretty much getting Worms 3D with some more content, as opposed to a completely new release. What you have to do in these challenges is hit targets within a time limit using various different weapons from the game, whether that is shooting them with the shotgun, flying through them with a jet pack, or using a super sheep to smash through them. Sadly, this mode has the same issues as single-player and becomes tedious quickly. 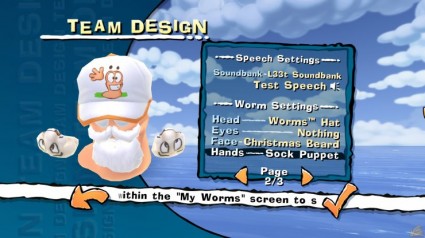 Tell me the hat looks good! The gloves are a bit much though perhaps...

A staple of the Worms series is the ability to create a team and call them whatever you want, which can be pretty entertaining. Every new game I play, I always call my team the Autobots; I am a huge Transformers fan. There are a tonne of customisable items for your worms, which you can unlock by using in game currency you get for progressing in the story or completing challenges. You can also unlock some special items for your worms if you have played other games in the Team 17 catalogue, cleverly called ‘loyalty items’.

Now though, you can even create your very own super weapon to use against your enemies. You can make them look how you want, and even choose how you want them to cause damage. The weapon of my very own creation was a single-shot weapon that burst into clusters like a grenade; I called it… the Omicron. I like being able to create a weapon that is specific to my team of worms, especially since everyone can do the same for their teams, making some encounters an interesting surprise.

Cartoon glory
Worms has always been one of those games with a really nice stylised look, and this has not changed. Even in 3D, the cartoony look of the worms accents the feel of the game. Despite most of the game being based on the foundation of an older game, it looks damn good. The biggest problem is the use of videos; these are okay at best and look as though they were rendered years before, and are only now being brought out of storage. Considering the effort that has gone into making the in-game graphics feel right, it seems a shame that they wouldn’t make some better looking FMVs.

Squeaky…
The saddest part of the sound is that it has been 16 years since the release of the first Worms game, and yet the voices, weapons and general audio are still exactly the same. Now I am all for using vintage effects to bring back a little nostalgia for a game, but in this case it comes across as little more than laziness. After listening to the same voices in the countless iterations of Worms that have come along over the last decade and a half, it seems I have finally hit breaking point and would like to hear some new voice effects.

Interestingly enough, on further reading this game is supposed to include new voice acting, but it is obviously designed to sound like all the others. The music is actually not much better, and follows the same trend of being practically the same as it always has been. I’m not sure if this is a bug or just my imagination, but in some of the campaign missions I found that there were levels that seemed as though they should have had music introductions, but didn’t. 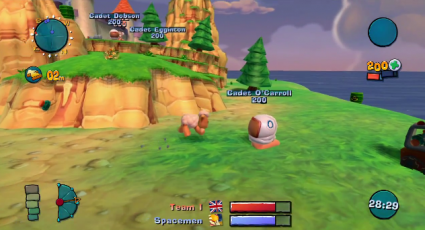 Cluster bomb
As I stated in the intro to this review, I played a lot of Worms multiplayer with friends a long time before internet gaming was popular. Now, with the internet at your disposal you can recreate the magic any time you want. As with just about every online game these days you get the standard choices for matches; quick match, non-ranked and ranked. In each one of those categories you can choose from a different gametype. There are a number available; however, I feel like they are too similar to each other to be worthy of the split into separate modes.

The standard deathmatch is easily accessible and self explanatory, but then you get into the other gametypes such as Homelands, which has each team start the match in a fort. This apparently leads to more strategic play, but in all honesty it just leads to stuff getting in the way before the real game starts. Destruction sees each team responsible for a base, and the winner is the one who destroys all the enemy bases. In the same vein as Destruction is Statue Defend, which has each team defending a statue from being destroyed. It might just be me, but both of those gametypes seem like exactly the same thing, except changing a base for a statue?

The last mode is interesting in theory, but not so much in practice. It’s called Survivor and has you fight one worm at a time until you have no worms left. Like I said; an interesting idea, but not really that fun. If you don’t fancy playing online, then you can still play locally with all of the same gametypes. 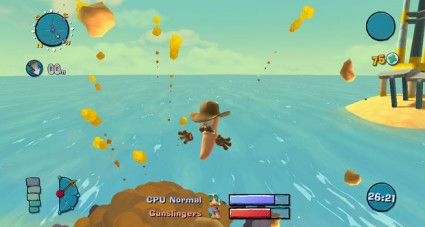 I hope this isn’t another box of freeze-dried crackers….
I tried my hardest to like this game; I truly did, but it seems like the odds were stacked against me. I think what has happened here is that Team 17 has taken the approach that more is better. They have thrown so many different features into this that it is bound to catch you one way or the other. Unfortunately, it comes across as a large package of mediocre content that will have you stop playing before you have actually tried everything.

Of course this just scratches the surface of the issues, and I will actually go as far to say that 3D Worms just doesn’t work.  One thing I will say is that the design of the levels can be very creative at times, but the mechanics of the game don’t allow you to take advantage of this and enjoy them. I think at this stage they need to do something new with the franchise, and even more so if they intend to keep releasing 3D titles. The most obvious thing that springs to mind is to implement physics into the levels so that platforms crumble rather than float, and structures fall under the damage you cause. Only time will tell, and until that time I think it would be best if we just leave this game where it is.