Each year we see our fair share of games based on movies, and this year is has been no exception. With the success of the previous three X-Men films, a prequel to the trilogy was added and kick-started the summer blockbuster season. This time the movie focused on the origin of one character, and you should all know by now that it was ‘cleverly’ titled X-Men Origins: Wolverine, in which the film took a look at our favourite claw wielding mutant. As usual with these big budget films, you expect the dreaded movie tie-in. Rather than being the bog standard drivel that you would usually expect, something slightly different came along. Developed by Raven Software (of Marvel Ultimate Alliance fame) and published by Activision, this game had a lot to live up to.

Who am I?
Throughout the course of the game you play as James Howlett (AKA Logan and obviously more commonly known as Wolverine). The game follows the plot of the film fairly well, but expands a little without hindering the plot too much, although as with most movie games some of the plot is changed to suit the gameplay. The story tells us how Logan not only got his adamantium claws but also about his time in the US military special ops. It also allows you to be a part of the epic battle between Logan and Victor Creed (AKA Sabretooth, who according to the film plot is Logan’s brother) and allows you to tear him a new one. The story is told in a series of flashbacks starting in the African jungle, before skipping forward to later events in Logan’s life. If you’re a fan of the comics then you will see that there are some differences in the storyline that have been embellished a little by Hollywood, but the basic storyline from the original comics is pretty much intact. 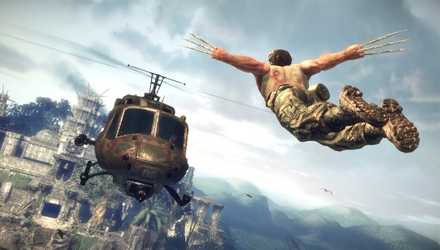 This seemed like a good idea at the time!

Lost in the jungle!
The game plays like your average hack and slash, but with your claws as the weapon of choice. The levels are very linear but there are some simplistic puzzle elements to them. The game is objective based despite that linearity, but on your way from point A to B there a lots of mini-missions along the way. At the end each level there is a boss to defeat too, along with some mini-bosses to defeat at other various points too. Some of the bosses can take little time to beat but on the flipside, others can take a good while.

There is little chance for standing around as the enemies come in hordes at times, getting in your way and slowing you down. They start off quite easy and get more powerful as you progress. There are a variety of brutal ways to kill enemies, and they are all great fun; you can simply lay into them and beat and slash them to death, or in some areas use your environment to your advantage. Using the feral instincts you can instantly see the different areas in which you can instantly kill your foes. Some of the enemies have to be defeated a specific way and this helps mix the battles up a bit. As is the case with hack and slashers, the combat can get a little tiresome here and there, but it does enough to hold interest all the way to the conclusion. It’s worth mentioning that this game is incredibly bloody, and a surprising yet satisfying move despite the movie being suitable for youngsters.

For each enemy you kill you receive experience points, and levelling up gains you points for unlocking extra powers and attacks. This typical RPG-lite approach helps the pacing and always rewards you something new for mutilating your attackers. In those attacks you can also unlock various combos too, and although they are slightly over the top they are a pleasure to watch. There are however some small optimisation and refresh rate issues, but this doesn’t hurt the game at all. There are also various collectables too that unlock bonus missions that are accessed from the main menu. After completing the bonus battles you can unlock costumes and there are 3 to collect.  There is also a battle arena that you can try your luck at incorporating everything that you learn within the story mode. 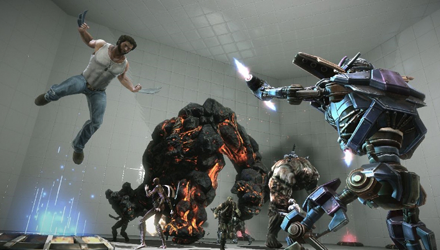 Into the arena... did I not see you in the jungle before?!

Why can I see my insides?!
The graphics look nice without really pushing your given consoles power. Characters are nicely rendered and so are the environments even which look deceivingly bigger than they actually are. Particular attention has been paid to Logan as when you are injured, whether shot or slashed, the impact damage is clearly visible on his body. Even when burned, it is clear to all what type of damage has been dealt.

Being Wolverine, with his mutant regeneration ability, his body regenerates any damage that has been inflicted. Impressively, a really nice touch is that any damage that tears you up, your clothing remains in tatters throughout the remainder of the level. Take enough damage and it is possible to see Logan’s insides and it never gets boring to watch his body repair itself. The cut-scenes are mostly in-game engine, although there are a few that have been fully rendered and they are brilliant to watch.

Hear me roar… RAWR!
It’s not just about the awesome ‘sknit’ sound effect when Wolverine unleashes his claws of death that Raven have mastered to perfection. The sound effects are mostly absolutely delectable, from the general ambience to the awesome sound of flesh being ripped to shreds. Unfortunately there is a distinct lack of voice talent, with only Hugh Jackman, Liev Schreiber and Will i Am appearing from the movie, and it definitely hurts the experience a little.

I’m good at what I do, but what I do isn’t nice!
I had a lot of fun with Wolverine and enjoyed the entire play-through a lot, however it’s the type of game you will complete once and never look at ever again. Without any real replay value other than playing again on a higher difficultly, it becomes difficult to recommend a purchase at full price. Rent it or pick it up for cheap, you won’t be disappointed for giving the game a look; however it’s certainly not a game that will help define your collection.