When I think about it, sporting World Cups are pretty amazing things unto themselves. Millions of fans, usually from all corners of the globe, converging to the one place to celebrate the sport they adore and to watch the best players in the world battle it out on the field. The planning and dedication it takes from everyone involved in pulling these tournaments off is quite staggering, but it’s all done for the good of the game.

From the opening kick-off, it becomes flagrantly apparent that Rugby World Cup 2015 does not care for the ‘good of the game’. Not only is it poorly presented, with its bland menus and outdated looks, but it’s essentially a re-skinned version of the previously released Rugby 15. That, in itself, raises a whole bunch of issues in my book, but I won’t touch on them here. All you need to know is that Rugby World Cup 2015 is objectively, a bad game.

As someone who doesn’t actually follow Rugby in real-life but has had decent exposure to it in the past thanks to a few Kiwi friends of mine, I was hoping that Rugby World Cup 2015 would ease me back in and explain a few of the basics. There is an in-game ‘tutorial’, though that turns out to be merely a collection of slides that dumps the entirety of the controls on the player, without any demonstration. There is also a training mode, which is a tad more helpful for learning the absolute basics, but they also go a long way to highlight so many of the shortcomings. I’ll explain.

For starters, the controls are a joke. For whatever reason, the developers decided that ignoring established control schemes was the best way to go, and set about creating one of the most convoluted and poorly implemented control schemes I have ever used. Something as simple as controlling a player’s run is impossible to do with any sort of accuracy as the players have two speeds: motionless, and full speed. Players run in large circular arcs instead of nimbly pivoting off their feet. Have you ever watched five year old kids play football? It’s like that, except that this is meant to be a representation of the best players in the world.

Speaking of which, I hope you weren’t expecting to find real players here, because despite the Rugby World Cup licence, there are, as far as I can tell, no real-world players. You read that correctly. At very least, new teams can be created, and the current ones can be edited and saved. 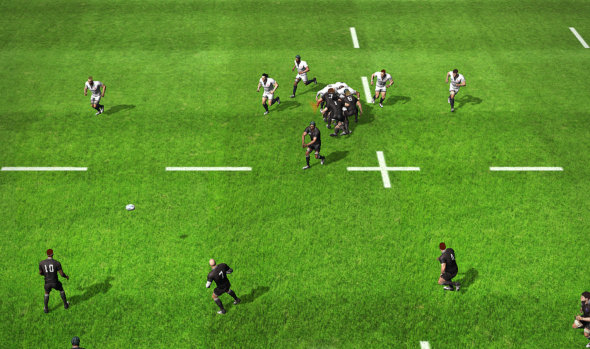 There are a bunch of things in Rugby World Cup 2015 that flat out don’t work. Goal kicking, for example, should be relatively simple. Pull down on the right-stick, watch the power meter, as it gets close to the top push the right-stick back up. Nice and simple, yet inexplicably broken. I’d wager there is about a 50/50 chance of it working correctly, as more often than not I’d hit the kick at the same point each time, yet its power would vary wildly, meaning that I’d regularly miss conversion attempts from right in front of the posts. Unbelievable.

That’s not the only thing. Short passes will often just fling directly up in the air, leaving it open for interception. It happened so regularly that I just stopped using short passes. Many of the player animations are just so ropey – like when a ball stops at a players feet, it’s often stolen out from under their noses by the opposition because they took so damn long to bend down and pick it up. It’s laughable. When players aren’t strobing between animations, they’ll sometimes freeze entirely, causing the game to effectively lock itself and require a restart to ‘fix’.

The icing on the cake is the World Cup mode itself. There is nothing to tell the difference between a friendly match and a World Cup final, aside from a few extra lines of half-excited commentary. Where is the size and spectacle of the occasion? This is meant to be the holy grail of matches for Rugby fans and players alike, yet in Rugby World Cup 2015 it’s treated like a Sunday grade match, and it leaves me feeling bewildered and confused. 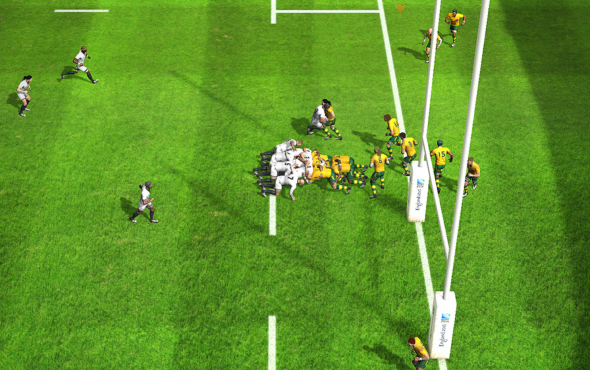 Literally twice did I have any fun in my time on the virtual pitch. One occasion was where the generally dim-witted A.I. decided to back me up for a change and put in a clever run, requiring a deft offload to break the gap. The other circumstance has been while defending; tackling, at times, gives a decent sense of impact, though again it’s let down by the abominably poor animations. There is also no Instant Replay feature, only a quick replay when you score a try, over which, you have zero control. Perhaps it’s not all that surprising, actually… did I mention the terrible animations?

Not even worth a Try

There is so little that I enjoyed about Rugby World Cup 2015 that were I a genuine fan of the sport, I’d be extra disappointed in this effort. The lack of real players, despite advertising as such, the blatantly obvious re-skinning of an already poor title, and the frustratingly broken controls only ever add up to a poor experience. Nothing here redeems itself, and one can only hope that the respective teams perform better in this year’s World Cup than this game does.