Call me insane, but there are times when I just don’t want to think about what I’m doing in a computer game.

Sometimes the only thing I want to do is just get into a game, grab a gun and kill things without so much as a thought to a level, a task or puzzle. So this might explain my love for games like painkiller and Serious Sam, neither of which require any level of brainpower whatsoever. In the case of Serious Sam, there’s also some fairly decent humour to keep you on your toes, but in the end it’s good old-fashioned fun. You don’t need to think; you just enjoy the experience and go with it.

Despite the title quoting some of the legendary Serious Sam humour that’s made the game what it is, Serious Sam has always been that ugly duckling of the gaming world with a number of people accusing it of trying to be a clone or spin-off of Duke Nukem and therefore hating it, leaving those that actually did like it as a minority. Nonetheless, Serious Sam has gained a cult following.

Considering it started life as a highly polished, precise and fast-paced first-person shooter (admittedly sharing some of its humour with the Duke), it’s always surprised me that its fan base lays where it does.

Naturally this means I love it. I love cult games, and I love games where I don’t have to think too much. So when I saw a that a small indie company by the name of Vlambeer were producing a turn-based RPG version of the game, I began jumping for joy like a three-year-old.

Unlike its predecessors, Serious Sam has now dropped its stunningly beautiful 3D maps and textures, and opted for a look akin to an old Game Boy. While normally this would be a turn for the worse, there’s something about it that adds a sense of charm to an already well-loved game series. Another ‘quirk’ if you will, that just adds to the whole Serious Sam experience.

I touched on this above but the game is quite literally built for the Game Boy, consisting of two parts: a world map and battle sequence screen. It reminds me of The Legend of Zelda: Links Awakening, which fills me with a small sense of joy and childhood memories.

Is this starting to sound a little too sugar-coated to you? Yes? Good. I’m glad we understand one another.

While there was a real sense of joy upon seeing a new Serious Sam with a few different styles and an indie developer at the helm, I was left feeling very bitter, sad and altogether disappointed about this to the level that I actually felt quite upset. Actually, I was left feeling quite bored, which is something I don’t often say.

You see, part of the charm about Serious Sam was that it was a no-nonsense, fast-paced, quick-talking shooter filled with little sound bytes and little quirks that make Sam ‘Serious’ Stone what it is. This game, whilst it pays a reasonable homage to it, seems to destroy that.

Gone are the sound bytes, gone is the fast paced soundtrack and instead we have a generic RPG game with a character that looks… sort of like Sam. 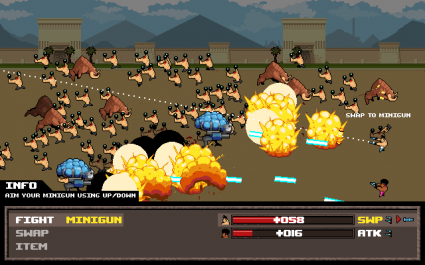 Serious Sam as an RPG? Whaaa?

Double your gun, double your fun
Don’t worry, the gameplay could be this title’s saving grace. Yes, it lifts from the old Game Boy styles but that’s no bad thing, and it’s certainly good to see this forgotten style being used once again.

On the world map, the player controls Sam by wandering around towards the exit. If you ‘land’ on a particular square, you face a battle. When the battle starts, you choose a weapon or action, aim it roughly in the direction you want, hit the enter key and… wait.

You can move Sam (and later, his counterparts) up and down, but five seconds later you’re back to the shoot, select and aim screen so you can readjust or choose a weapon. This happens every five seconds by design.

If a battle goes on for any more than 30 seconds (and they can!) not only does this become incredibly annoying but it becomes enormously hard work, and by the end of the third battle, the novelty factor of this wore off and left me feeling something I don’t often feel in a game: bored.

Yes, there are achievements. You get to meet people along the way who can help you in battle, and you collect items to expand your arsenal. Unfortunately, the more people you meet, the more complicated it becomes to control.

Like I said above, every five seconds you can choose a new action for your character; except you might have to do this another four times if there are new ‘wingmen’ on your screen. Five seconds of battle is suddenly accompanied by roughly 20 seconds of ‘figuring out what you want to do’, which makes the average battle drag on immensely.

It’s horrible. You spend more time deciding what to do and putting actions in place than you do actually playing and experiencing the game.

By the time I was a half hour into the game I gave up. I stopped. I was so bored and frustrated with it that I went out for a few hours just to take my mind off it. I ended up not playing for another two days, instead focusing on something completely different.

Normally I try and go into a lot more detail with gameplay, but there isn’t much more to actually explain here. 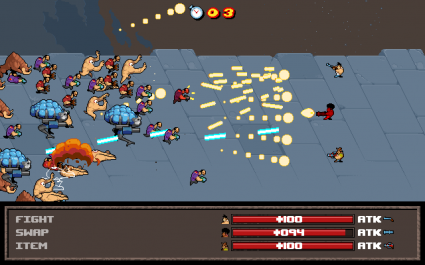 It’s all fun and games until someone loses an eye
The title quotes Sam in his first (more beautiful) incarnation, but then to be fair, the 8-bit graphics are quaint and reasonably well done (in parts) for what they are. Although in some cases, losing an eye might be forgiven as the excuse for the inconsistencies in the graphics. There are some areas where it’s ‘too clean’ and others where it’s ‘too grungy’ where someone has tried to modernize or show a little artistic flair, but in the end it’s the ultimate demise here.

Serious Sam started with pure beauty and graphics that still to this day look astoundingly good, and now it’s had that ripped away. I get that it’s trying to be different, but the whole experience leaves me feeling very underwhelmed, especially since even for ‘retro-style graphics’ they seem a little plain.

A perfect example is the sand. Even Civilization on my old Atari had a tiny dot here and there to show a little texture, which leads me to believe the designers were either trying to go for an even more basic graphic style (which doesn’t make sense since in some scenes there’s a lot of detail in something), or they just gave up and didn’t put the effort in.

Can you hear me?
The same is true with the game’s audio. I’ve already said about losing the classic quips (indeed every title in this article is one of his quips) and commentary that Serious Sam was well known for, but the backing midi-style soundtracks are just unimaginative and very repetitive.

There is much more potential here for someone to dig out the old chiptunes equipment and write something incredible, otherwise this just becomes boring after the first five fight sequences. The world maps are equally as boring, recycling the tunes at every possible opportunity.

If there’s one thing I’ve learned, its that music sets the scene more perfectly than anything else in a game. This is why old Apogee games, or even Monkey Island, boasted incredible audio scores. Monkey Island even advertised how good its music was on the box, and it showed. The developers could have at least put a little more effort into this and given us a little more.

Gun shots are about the only saving grace in the fact that they are literally at the limit of what you can get out of a midi sample; however, I strongly suspect these were ‘lifted’ from something else. 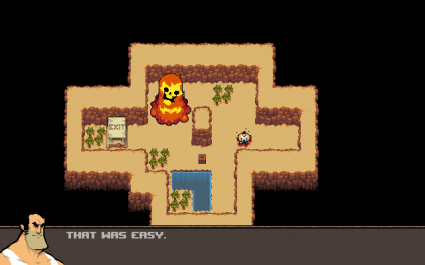 Just what the hell is this?
Alright, so maybe my expectations were a little too high. After all, the game is reasonably well produced, follows the (loose) storyline of Serious Sam and includes the odd personality quip (albeit in text form). Yes, it’s different enough to be good, but it just isn’t quite there yet.

Try as I might, this isn’t Serious Sam. It’s not even a game. It’s lethargic and more than a little soul-destroying. A thirty-second battle should not last five minutes because every five seconds I’m frantically hitting the enter key to ‘repeat my last action’. Make it ten seconds. Hell, give us the extra controls so we’re not limited to the only movements being up and down.

This game brings retro gaming fantasy, but it fails because it’s trying to cram in so many different things into a space that can’t handle it.

Think of the Game Boy. The Game Boy was limited to two buttons and a directional pad. The games were great because developers knew that this was all they had. Now, we are no longer limited. Both we and the developers have gotten used to having over a hundred keys with seemingly endless different combinations, and I am afraid that the developers here have built this game and forgotten this up until the last minute.

So sadly, this fails to even meet my analogy of a Game Boy title. Instead it’s more of a flash game. I wanted to like this game; I wanted to love it and feel it. I wanted to sit here and write this review with nothing but praise for an indie developer, for picking up the torch and producing something different that might just keep the flame alive. Instead they shot, and missed by miles.

I really, really wanted to love this game, and as I’m topping and tailing this review, even when it’s in draft form, my mind is desperately telling me to rip it up, start again and be more positive. Especially after TIMJ had a great interview with the developers, knowing that my review could seriously upset them, and knowing that maybe my expectations were too high. I’m sitting here and trying to find something to focus on to make this review seem so much more positive, but I can’t. I honestly can’t.

I’ve quoted Serious Sam all the way through this article. Every subheading has been one of his quotes, but I think one line from Serious Sam 2 is perfect here: ‘Man I hate running backwards’. Sadly, this is exactly what I think we’re doing with this game.