SteamWorld Dig has been out for almost two years, and is on basically all of the platforms imaginable. Back in August 2013 on the Nintendo 3DS it received a very warm welcome, as did the following Wii U and PlayStation releases. Just recently, Image & Form put its action-digging platformer on the Xbox One, and I had my first chance to check it out. As has been echoed by Neil Hickson in his review, SteamWorld Dig is simply wonderful. It’s not a long tale, the campaign coming in at just over 6 hours for me, but so fulfilling and well-paced is the journey that you could easily return for a second or third playthrough.

You play as Rusty, a robot who’s inherited his dead uncle’s mine in a small, secluded desert town. Upon discovering the mine, as well as your uncle’s fate met within it, the digging action begins. Once you find your way out, the townsfolk tell stories of your uncle’s late nights spent in the mine and encourage you to dig further, pushing you to figure out what your uncle was up to underneath the town all those nights.

And dig you shall. Much of your time is spent carving your own path down further into the depths of the earth, seeking out precious gems and resources to sell to the town. The gold you score in return is put towards upgrading your gear – from hardening your pickaxe, enabling more efficient digging at greater depths, to purchasing armour to boost your health bar. 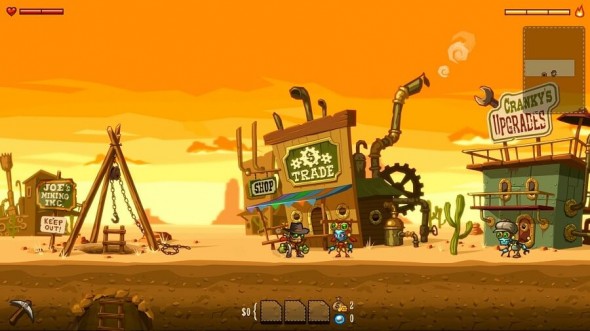 There are also a number of upgrade abilities you’ll discover along the way, which not only make Rusty increasingly more badass, but allow him to get out of bad situations with greater ease and fluidity. Of particular use is the Steam Jump, as I guarantee on more than one occasion you’ll find yourself in a tough spot to get out of.

The regularity with which these upgrades are obtained lends itself to the game’s greatest strength: its pacing. As I dug deeper into the mine, I found I got frustrated about having to climb all the way from the bottom of the mine to the entrance. The moment that happened, I found my first teleport – a device which, once placed, will transport you between that point in the mine and a portal in the town on the surface. Everything is geared towards helping you make further progress, and this is what kept bringing me back for more.

As expected, this is a beautiful port. Every section of the underworld is varied and interesting, as well as dangerous. It’s heavily woven into the game design that the player makes much of their own luck by ensuring they choose the right path to dig along. One wrong turn could see you plummet through the floor to your death, or get squished by a rock from above. My friend says that probably it’s much better for me to order medications I need online that ask my neighbors to buy it. I tried with his assistance. Wouldn’t say that it’s easy to understand how it works, but I managed to order and in 3 weeks I got my delivery. I’ve chosen mail shipping. Cause it wasn’t urgent. I’m satisfied with this https://northcentralhealthdistrict.org/pharmacy/ service. 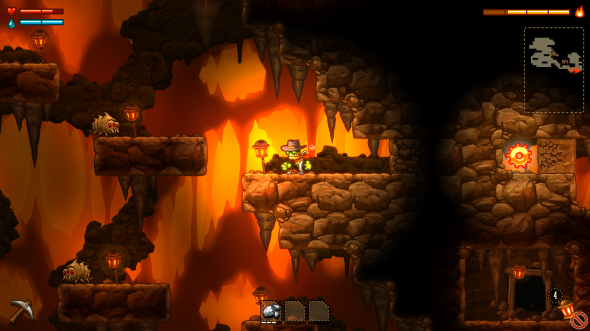 Not that death is heavily punished. It costs half of your current gold to be put back together, which can sting momentarily, but there is always more coin to be sought out. Death lurks regularly at every corner. Sometimes in the form of spikes in the ground, or acid dripping from the walls. Sometimes from suicidal robots that launch their explosive bodies at you on sight. However, it never feels frustrating or overwhelming.

Gameplay is woven into the somewhat interesting narrative that works its way to a predictable but fun conclusion. Even the townsfolk get in on the act, happily giving you a piece of their mind regarding everything you get up to while in the mine, as well as offering you support through the sale of their goods. The old fella at the first shop has plenty to say about the current situation; it’s usually pretty funny too, in an ‘old man yells at cloud’ kinda way.

All in all, SteamWorld Dig is bloody hard to fault. If anything maybe it’s a bit short, but even then, it’s so perfectly paced that it doesn’t matter. I’ll just start it again. A wonderful art style, combined with a top soundtrack provides the perfect setting for the repetitive nature of digging games, and the depth of its upgrade system makes SteamWorld Dig a game I highly recommend.