Since the start of the year I have started to play more and more fighting games. In fact, I play a tournament every month now and take part in weekly play sessions, so the release of this Street Fighter X Tekken piqued my interest. In recent times the beat ‘em up genre has made a massive comeback, what with the massive success of Street Fighter IV; and its many sequels.

So, when Capcom made the announcement that they were going to be developing the first in an unexpected crossover with Namco’s Tekken, many fans were excited, although this excitement was met with some concern over balancing the two different game styles.

I am pleased to say that they have made a damn good go of it.

As with all fighting games, there is an enormously complex storyline to follow in the arcade mode. My apologies for sarcasm being difficult to convey in text.

It begins with a news report explaining that a meteor is heading for the Earth and that it will land somewhere in the Arctic Circle. This then leads to you fighting your way through a series of opponents with the eventual aim of gaining the power of whatever it contains.

Who you decide to lead your two-man team from both the Tekken or Street Fighter roster, will see you matched against a suitable end boss; Ogre or Akuma. 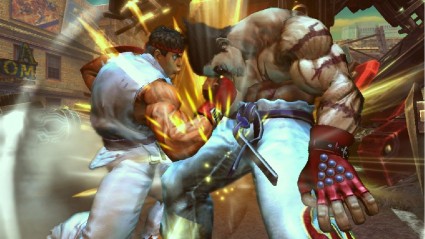 Let the beatdown begin!
With Capcom developing this game based on the way Street Fighter performs, the first challenge would be to adapt the way the Tekken characters play. The fighting takes place on a 2D plane, unlike Tekken, where the fighting takes place over three dimensions. All of the Tekken characters have essentially been turned in to Street Fighter versions of themselves, allowing them to be well-balanced for that certain style of play, and even the way their signature moves are performed has been altered.

All move sets are, of course, in the traditional Street Fighter styling (quarter and half circles), although there are certain characters in the game whose moves are all performed using charging (holding the stick in a certain direction), and every character now has their own kind of charge move to perform too.

The mixed roster is full of great character choices, although some appearances are quite interesting, which I can only assume is down to balancing reasons. As well as an excellent selection from both the Street Fighter and Tekken rosters, in the PS3 version there are some special fighters such as Cole from Infamous, Pac-Man, Megaman and Toro & Kuro (the Sony cats). Sadly, I didn’t get any time with Pac-Man or Megaman as they are only available for download as of the 13th of March. 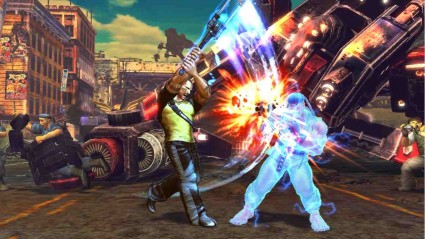 Rather than the traditional one-on-one of the previous Street fighter games, they have opted to make the fighting tag based, leaving you to choose a team of two fighters. With the new team-orientated fighting comes a whole new series of different moves to learn, and who better to teach you those moves than Street Fighter’s own, Dan! That’s right, he is back and teaching you everything you will need to know to make use of the new techniques.

The tutorial mode is fairly comprehensive. It almost feels like Capcom want people outside of the fighting tournament scene to play the game, and this feeling becomes even greater with the introduction of the gem system. This is to help players overcome aspects of the game that are maybe a little too challenging. You can have a gem that blocks grapples, one that increases speed another that increases damage, and even one that simplifies the button combinations to perform the moves. For the untrained player this could make all the difference between success and failure, making the game a lot more accessible. You can customise your own gem loadout to best suit your style of play too, which is a little reminiscent of the Customer Groove System from Capcom vs. SNK 2.

Since the game is focused on a pair of fighters ,there are plenty of moves that can be performed with your partner. You can now use a technique called a Launcher to throw your opponents in the air and have your fighting buddy jump in on the action to take your place. There are tag specials which allows both players on the the screen to fight at once or even perform some seriously devastating double specials.

You can even sacrifice a character from your team if you have less than 25% health and enter what is called Pandora mode. This super charges the remaining player on your team and gives them increased hit damage. The trade-off here is that you only get a certain amount of time before your newly powered up fighter drops to the ground and you lose, so you have to put your opponent down quick. 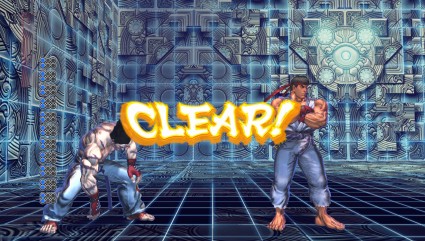 Time for a training montage.

The art of fighting
The game itself has a similar art style to Street Fighter IV, with all the characters being similarly rendered with a ‘hand drawn’ effect. The main difference is that they all look a little cartoonier than before, with massive feature exaggeration on each fighter; from M. Bison’s incredibly round face, to Law’s hilarious fixed expression. One thing is certain, and that is that all the Tekken characters look pretty amazing when drawn in this style and fit into the Capcom fighting universe pretty well.

The level designs are very detailed with impressive looking scenery and animated backgrounds, often containing characters that didn’t make the cut for this game. There are a handful of levels that allow the fight to take place over multiple platforms, meaning the combatants move to different areas between rounds. Slightly disappointing, then, that you can’t move the fight naturally through these amazing levels during rounds.

Despite that, it looks great and the background characters provide a bit of comedy with their cameos, though the animated scenes going on in the background can be a little distracting. However, this is nothing new for the Street Fighter series.

The sounds of violence
One of my favourite things about fighting games is the electro soundtracks that accompany the gameplay. Street Fighter X Tekken is no exception to this rule, with a great music selection for the fighting and one hell of an awesome intro set to a song by the band Black Tide. The sound effects are top-notch; you can really feel the impact of every punch. The only thing to be said is that the voice acting for some of the cut-scenes leaves a lot to be desired.

Challenge accepted
One of the most interesting parts of the game is the Scramble battle, which as the name suggests is anything but organised. Rather than your buddies waiting on the wings for you to tag them in, all four players are on the screen and are a part of the battle in a free-for-all, Marvel vs. Capcom-esque moment of madness. 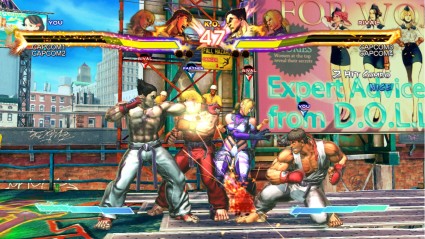 A bit of tornado tag.

There are a couple of different online modes available to you, from the standard ranked mode, which lets you collect battle points, to the endless mode which lets you sit in a lobby with other fighters and you all get a turn at fighting, winner stays on. You can also play the Scramble match type online, which I imagine with the right group of friends could be a real blast.

However, during my experience with the online play, I was a little disappointed with the networking performance and my performance of course, which, despite many hours of playing, I failed to win a single match. There was quite a lot of lag, coupled with loss of audio, probably due to frame skipping to compensate for the lag made for a less than desirable experience. I’m not saying it is the reason I couldn’t win, but it couldn’t have hurt for it to have been a little better.

Final round
It is difficult to tell where this game lies in the grand scheme of the fighting game world. It would be really interesting to see the game played in tournaments like EVO, but you may find that more hardcore fans of the genre are less accepting of it due to its approach to teaching newer players. Not to mention the gem system making things a lot easier, actually removing the need for skill in some areas.

That aside, what Capcom have produced is a fighting game with an amazing roster of characters and have expertly balanced the two different factions. Whether you are a seasoned pro, or a complete noob, there is something here for you. Throw in some fun, new game modes and a dream roster of fighters, and what you have is a near perfect fighting game.