Stealth games are cool, right? They offer us something different to the norm. Guns and rocket launchers are replaced by swords and throwing knives, and they require a level of patience over and above the likes of Call of Duty or Grand Theft Auto, having you watching and learning the patterns of guards and slowly finding your way from A to B.

Such is the way of things in Styx: Master of Shadows. The World Tree’s heart is full of Amber, and Styx (a two hundred year-old Goblin and self-confessed fan of thieving and murder) is after it.

Unfortunately for him, it’s kept in the giant Tower of Akenash, a humongous castle. No small task for a tiny Goblin.

Firstly, Styx is a proper stealth game. As such, the spectacular lighting effects aren’t just for show and sticking to the shadows is the name of the game. The torches that light the Tower of Akenash can be extinguished, either by hurling a spit-balled clump of sand at it or doing it yourself while standing next to one. It’s not always about cutting yourself a shady path, though; there’s plenty of sneaking to be done. Small vents hidden away in dark corners lead the way around potentially dangerous bottlenecks and provide some good variety for follow up playthroughs. There are a variety of ways you can tackle each mission too, thanks largely to excellent level design.

This is especially true when you take into account some of Styx’s more unique talents. Some sections, for example, require Styx to vomit (yes, vomit) up a clone, which can be used to cross under certain doors or act as a distraction to guards. The clone can’t attack directly, but it can grab on to guards for you to take advantage of, and you can also hide it inside a closet or box to leap out at unsuspecting enemies and drag them back in. Nice!

Styx has a huge sense of verticality to it. The outside missions show off huge spires, steampunk-style airships and giant regal flags that hang several stories high. There are hooks and ledges that Styx can grab hold of and swing to and from, and he can dot the walls of almost every room and tower. It’s not quite as free flowing as say, Assassin’s Creed, but it works, though at times can be a huge source of frustration. 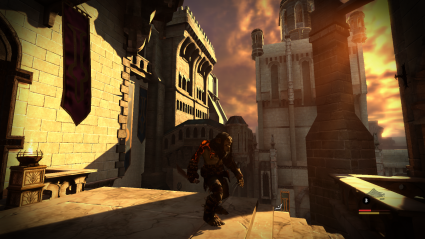 Spectacular lighting showers every corner of the world.

The controls play their part in this, a bit fidgety at best, which doesn’t help the jumping and platforming, and there is a lot of it. Countless times I died and lost huge chunks of progress because Styx didn’t grab the hook or the ledge I was aiming and fell to his doom, which brings me to my next point. Save early, save often. This game is tough as nails, and I guarantee that more than once you’ll find yourself yelling abuse at your monitor, like I did after my 20th attempt at leaping a gap that I had to clear.

Sadly, the combat mechanism too is pretty much pointless. If a guard spots you and engages combat, your only option is to parry their attacks a certain number of times to stun them, and only then can you attack. Some guards can’t even be attacked due to their size and armour, and therefore must be avoided at all costs. Even worse, the creepy-crawly enemies that wander the later missions cannot be attacked at all, leaving you with no option but to run if they start attacking, which is nigh on impossible.

Worse still, the timing required to parry feels off and, as a result, more than a number of times I found myself cut down despite parrying all I could. Stealth combat is an option, and one that you’ll likely get more mileage from with Styx being capable of a muffled or quick kill. Quick kills can be louder, but are faster to pull off. Muffled kills take quite a bit of time, so you need to get the timing just right or risk being caught in the act. 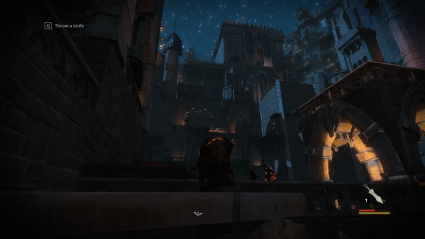 If impressive towers are your thing, you’re in for a treat here…

If you do get spotted, the A.I. will scream about how determined they are to find you, then simply give up and walk away, especially if you’ve jumped up to a ledge or somewhere higher than their field of vision. Unfortunately, they repeat the same lines over and over again, to the point that you’ll want to kill them simply to shut them up. They do, however, display the occasional semblance of intelligence. Guards will take over their fallen comrades’ patrol routes, keeping you on your toes and forcing you to continue moving. They will also move off their path to relight any torches you’ve put out. This made everything feel dynamic, which I appreciated as more often than not I found the A.I. to be pretty predictable.

There are, predictably, some RPG elements to Styx. Completing mission objectives, secondary objectives and finding collectibles earn you skill points to spend once back at Styx’s hideout, in the sewer underneath the Tower. It’s here that his ‘work partner’, Ozkan, hangs out to offer advice between missions. Sadly, many of the ‘skills’ don’t provide any real sense of progression, and could be ignored if you so wished.

Styx to the shadows

I have a problem here then, because even after all that, I still enjoyed myself more often than I didn’t and Styx really does look stunning in places, small clipping and technical issues aside. I felt a great sense of achievement when I found a secret passage, or worked my way through a particularly difficult section and it feels awesome nailing someone with a throwing knife because, well, damn it, that always looks cool. Perhaps my biggest disappointment about Styx is that for everything it does so well, it does something else to draw you out of that experience.

I feel like some people will get a lot out of Styx: Master of Shadows, however, particularly if you’re a fan of the genre. If you like to take it slow and work your way through without being seen, there is certainly enjoyment to be had here.