When I played the first Tales of Xillia, I was instantly drawn into its world and, thanks mostly to its brilliant protagonists, I put a lot of hours in, playing through both stories and seeing pretty much everything there was to see. At the time, I had known there was a direct sequel coming but, like most things Tales related, I had to wait ages for that to be released in the UK. Finally, nearly two years after its Japanese release, Tales of Xillia 2 is here.

Taking place one year after the original, Tales of Xillia 2 follows the journey of Ludger Kresnik. During the opening scenes he meets a young girl by the name Elle, who uses him as a patsy to gain entrance to a train. He follows to confront her, but the train is attacked by terrorists and most of the passengers are killed. Teaming up with Jude (the protagonist from the first game), Ludger tries his best to protect the rest of the survivors, but his efforts are cut short when an explosion destroys the locomotive and nearly kills him. After being saved by a doctor, the group end up amassing a considerably large debt. With no other option, Ludger and his friends set of about lowering the financial burden while also helping the mysterious young Elle.

Much like the original, the story held my attention well enough and provided not only a few new characters to get to know, but also allowed me to revisit the entire cast from the first game. With time having moved forward a year, I was able to see how the original cast had developed, with some having seen big, fascinating changes since we last met. Although the opening gambit felt a little out of place, for me, the story held together well overall and achieved what it set out to. Be it though the main quest or one of many tangents, all loose ends were tied up and I got to find out more about what my favourite characters had been up to. 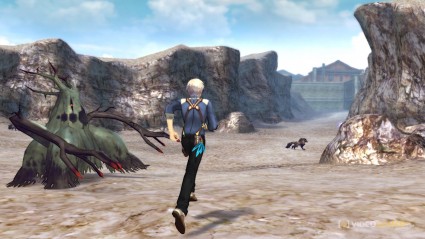 Been around the world, theres no place like… the field

One of the best aspects of the storytelling is through its ‘skits’, which are short animated interactions between characters. These can be activated at certain points when highlighted on the screen and are completely optional. They range from giving insights to the previous story, or engaging conversations between characters. They’re always something I always look forward to in a Tales game and this outing was no different. Unfortunately, they were let down by Ludger’s inability to utter a complete sentence. That in particular was something that nagged at me. Ludger – the main character – is not fully voiced while, bizarrely, his entire supporting cast all are. The most you gain from him is the odd grunt, a two word sentence or a sigh, which left me wishing for more from his character development in particular.

As you’d expect in any JRPG, you have an entire world to explore, although progression therein is pretty linear despite the ability to backtrack. While being fulfilling, my only disappointment was that little of this was fresh as the majority of areas had been present in the first game. Of the few new areas to explore, however, I will applaud them for effort as what they have added in fits well, looking like it could always have been present in the previous game. As before, towns are still full of life, and there’s a good mix areas in which you’ll do battle.

In that sense, Xillia 2 is visually on par with every other Tales game on past gen and sticks with the traditional anime graphic style seen in the prior game. Colours are bright and vibrant with minimal shading, while the landscapes also are in keeping with that same style; it feels like you’re running through a 3D work of art. 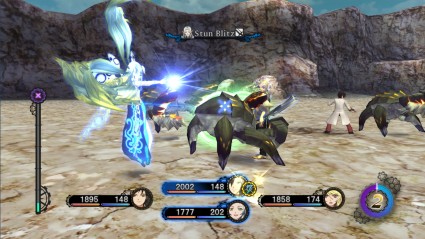 The biggest changes can be seen in the combat system, which has eradicated any of the shortcomings seen in previous incarnations. Fights still take place within an active battlefield with four of your party against multiple enemies and, using an array of standard combat moves, you can slash away at the foes. You are also still able to utilise the ‘Arts’ moves. Arts use TC points (essentially MP), and they can be elaborate and flashy, but they’re also far more powerful than the standard attacks, brilliant for turning the tide in a tough battle. Aside from this, you can also link with one of your party members for additional battle bonuses and special moves. Connecting to another member in this way allows them to work together to defeat enemies; each party member has a specialisation, which could be anything from destroying a defence to healing perks, and once linked you can perform moves that are much more elaborate and powerful.

The combat is generally more fluid than any other Tales game prior, and is probably the most rewarding area. Ludger, unlike the other characters, can also dynamically change his weapons during combat to become a completely different class type and this this breathes fresh life into the active combat system, and allows you to be strategically flexible. Battles can be quick, or long and tactical but the combat keeps you engaged as there is so much variety in terms of the attacks you’re able to perform. Because of this, each encounter feels fresh and looks visually stunning, and I looked forward to every single one. I especially found the linked combat fuller and easier to execute due to not being stuck initiating with particular moves; a downside of the first outing. 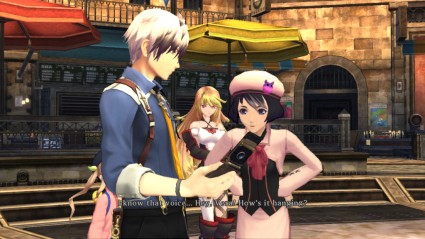 Ludger! The man, the myth the L… Mute

Xillia 2 features a new skill tree system that, unfortunately, is not quite as easy to navigate as the previous system and also makes it difficult to gain new skills. Characters can chop and change their given skill tree at any time, but you’re provided very little insight as to the moves you will unlock by using them. Given a choice of path too, you pick the direction you think might maximise your given character’s potential and simply hope that it will prove rewarding enough, which adds an unnecessary difficulty to your characters’ development. It’s good to see them mix things up a bit, of course, but in this case it would have been better to leave a near-perfect system alone. They do explain in-game that the change is a mutation of the original system and, well… it’s not often that a developer says a secretive sorry for imposing a drastic change on you.

More of the same, and that’s okay

Tales of Xillia 2 is a well-rounded RPG that expands decently on an established and entertaining world. With interesting new characters, greater depth given to old ones and all loose ends tied up nicely, the story thoroughly entertained this fan of the first game. All the while, evolutions made to the combat system kept me on my toes both strategically and systematically.

Even with some shortcomings, such as the baffling change to the levelling process and the lack of dialogue from the main protagonist, there are many hours of enjoyment to be had. Fans of both the previous game and the franchise in general should not turn their nose up another solid Tales adventure.