Did you ever see The Shawshank Redemption? Ever wanted to know what it’s like to be Tim Robbins, carefully planning and executing an escape plan, years in the making? The Escapists is about as close as you’ll ever want to get to picking fights with inmates, chipping away at brick walls with forks, or tunnelling with plastic spoons.

Sadly, that can be as frustrating as it sounds.

Let’s not start off on the wrong foot here; there are things I like about The Escapists, for sure. Its 16-bit graphical art style, whilst not thrilling, is still pretty groovy and unique in its own right – continuous walking animations aside. The soundtrack is also suitably retro, featuring a fantastic chiptune original soundtrack that, to this moment, is stuck firmly in my head.

After the basic tutorial, The Escapists places you in your cell in the early morning, just as the guards give the wakeup call. All the prisoners pile out of their cells towards the assembly area, where you begin morning roll call. The routine of prison life is all there: you’re expected to be in the right places at the right times. If guards spot you wandering the halls when you’re supposed to be in the lunch room, they become more suspicious of you. Guard suspicion is shown as a number between 0-100. It drops gradually, provided you aren’t doing stepping out of line. If it reaches 100 though, the guards go full LA cops-style on you, beating you unconscious.

It’s not just guards who can decide they’ve had enough of you, either. Other inmates are more than happy to lay the smackdown if you’ve gotten in their way one too many times. If their opinion of you drops below a certain point, not only will you not be able to buy items off them but they will probably try to beat you down every time you cross paths. You can raise their opinion by ‘talking’ to them – tapping ‘A’ while you’re close, but that’s as in-depth as that goes. 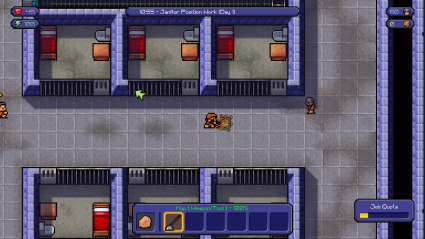 Thankfully, in situations where talking isn’t an option, you can fight back. The issue here is that it happens automatically, which can be problematic. Often I’d be caught in a scenario where I’d be in the lunch room, and an inmate will get up from their table and charge in my direction. A guard spots this and runs over to try and stop the ruckus, but due to the ‘auto-punch’ mechanic, I’ll beat down the guard instead, causing the other guards to flip out. Beat down two or more guards and the prison goes into lockdown, with the remaining blues attacking anyone not heading back to their cell.

Getting knocked out isn’t, at least initially, a huge set back. You’ll probably get thrown into solitary confinement for three days – nothing more than a fade-to-black screen and a message saying why you’ve been locked away. Where it does hit you hardest is when you’re preparing for escape. If you have a vast array of contraband in your possession – things like crafted shovels, weapons etc – they will all be gone as will your progress towards escape.  This can get hugely frustrating, and it wore me down faster than I was expecting.

Crafting isn’t simple. Whilst you can purchase tips for coins, which are earned by completing tasks for inmates, ranging from distracting guards at breakfast to beating up a fellow inmate, the tips give you only basic ideas about what can be crafted and how. There is no crafting guide, at least not in the version I reviewed, pushing me to find a wiki page online. This would be fine if The Escapists was brilliant fun, but it never quite gets there.

The Escapists relies on trial-and-error gameplay, as you try to figure out what works and what doesn’t. In the case of other somewhat challenging games like Super Meat Boy or New Super Luigi U, it’s a tactic that works because the gameplay is quick to put you back at the start of your puzzle. The learning is done on the spot. With The Escapists, however, it struggles to ever find its feet in this regard because progress towards escape is painfully slow; any setback feels like running the never-ending gauntlet that extends just beyond your reach every time you get close to finishing it.

There is a small element of character progression, with strength, speed and intelligence stats all requiring attention throughout the daily routine. You have a dedicated exercise period in which you can work out to increase your characters strength – essential if you’ve upset your fellow inmates and keep finding yourself on the end of their fists – and moving speed. You can also raise your intelligence by surfing the interwebs or visiting the library and reading. Although the mini-game for raising strength and speed is quite cool, intelligence is reduced to nothing more than tapping a button once and waiting for the bar to fill up. It feels tacked-on and uninspired. 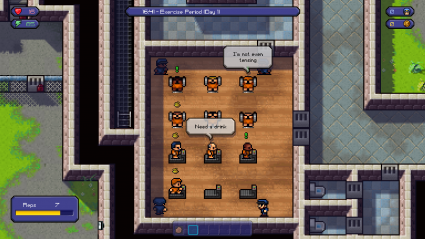 Throughout my time with The Escapists on Xbox One, I couldn’t shake the idea that keyboard and mouse would be significantly better suited to getting things done. In one case, I was digging a hole out of my cell underground, and had planned to tunnel my way out. I covered the hole with my desk, which you need to pick up and move when you want to continue digging. With the guards doing their rounds past your cell pretty regularly, you play a finely balanced game of move the desk, and the gamepad lacks the twitch control needed to pull this off with any regular success. I also encountered a frustrating issue where I couldn’t immediately replace a poster over the hole in the wall I’d cut through my cell. I was discovered and thrown into solitary and not through fault of my own. Hours of progress lost equals pure, unabashed frustration.

It’s a shame really, because The Escapists has some cool ideas. I found the prison routine to be quite an interesting idea to explore, as well as the sheer number of ways you can escape. It’s pretty impressive in this regard as you could tunnel your way out (don’t forget to build support for your tunnels!), beat down all the guards to send everyone into riot, or sneak out dressed like a workman, amongst other things. Yet the lack of any meaningful player direction, combined with the amount of trial and error required to figure out what’s going on, detracts heavily from the fun.