With some eleven expansions packs, The Sims 3 could have kept going forever. For those who invested in even a small amount of the expansion packs, The Sims 3 was a whole new world and by the end, a far-cry from the basic world that the standalone game gave you.

Weather, pets, university, holidays, magic; EA seemed to live by the infamous Field of Dreams quote, “Build it, and they will come” and enabled us to fill our Sims’ lives with pretty much anything we could imagine, and even stuff we never even considered. By the end of The Sims 3‘s lifespan your Sims could live a pretty full, and interesting life.

Going back to a standalone pack was always going to feel basic after the plethora of additional goodies The Sims 3 gave us and, as pre-release details were revealed about The Sims 4 it became apparent that we were going to get less than the “basic” we had been accustomed to…

No toddlers, no pools, no cars; these are just some of the omissions that created the most backlash prior to release. Developer Maxis responded to criticism by advising they simply could not make the features work, so took them out altogether. Fortunately, as time goes on and patches are being released, we’re starting to see the missing content added back in. Only the other day, a patch was released to add pools back into the mix, proving cynical predictions of a “Water Life” expansion pack wrong.

The Sims 4‘s Create-a-Sim offers many new customisation features, giving you the opportunity to personalise your Sim in more ways than ever before, changing anything from nose length, to bust size, and targeting in on particular areas like calves, thighs, and chins. By clicking on any area of the Sim’s body, you can drag and move until you get the desired look. This is almost impossible to do on a laptop track-pad; you’ll drag too far, the slightest movement seems to set the sliders off and at times it can be largely unresponsive.

Plug in a mouse, and your problems are solved, and you can enjoy the game the way it was intended. Suffering from “base game syndrome”, The Sims 4 has an extremely limited range of clothing and customisation options. For experienced Simmers, those used to picking any pattern they can dream of and pasting it onto the clothes they want in The Sims 3, having to use the predefined clothing patterns in The Sims 4 feels a bit limiting. 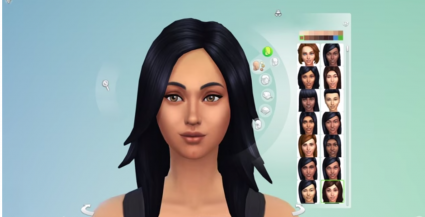 The world of The Sims 4 in itself is visually spectacular, with its luscious vistas and landscaping. Once you get a bit deeper, the two different towns are broken down into micro-neighbourhoods. Where The Sims 3 could let you transition seamlessly within the whole town, The Sims 4 gives you quite lengthy loading screens to get out of your own micro-neighbourhood. Even going to a neighbours house a few doors down could land you with a new loading screen, so it’s easy to get stuck in a trap of inviting people over rather than going to explore the towns. You won’t get to travel to your Sims’ place of work, as you have been able to in previous games, and will have to wait at home for them to finish.

With an overly long tutorial, The Sims 4 tries too hard to show off its new features, which are actually quite simple concepts to grasp. For the experienced players among us, there is no clear way to turn the tutorial off, so you’re forced to sit through a series of menial tasks until the game feels you’ve picked things up. For those who can’t abide sitting through the tutorial, you can turn it off, but through Origin rather than the game itself.

What The Sims 4 fails to do, is show the changes to features inherited from The Sims 3; for example the ability to choose how the Sim performs at work, whilst still present is not as obvious as it was previously and for a while it had irritated me to find that it had gone. It was only through accidental clicking that I discovered it was still there, and this seems to be the case with other features.

Where other Sims games have tended to bring new items into the shop for you to furnish your Sims’ homes with, The Sims 4 appears to have reduced stock. No more washing machines or dishwashers, and with babies being next to useless, and toddlers a thing of the past, there are far fewer items for children. With all of this aside, The Sims 4 does have some notable building features.

For those wanting to save time in building, there is an option when building walls which allows you place a whole room shape, in pretty much any shape you can imagine. If you want to go the whole hog and skip out on decorating and furnishing the room altogether, there’s even an option for this; kind of like hiring an interior decorator, you can select by room type and then pick whichever colour palette and style takes your fancy. Lay down a few of these rooms, and your Sims can be good to go within minutes. Of course, for the ever ambitious architects and feng shui experts out there, you can while away hours upon hours, making sure your walls are exact, up to the half square mark, and that your picture frames are at exactly the right height on the wall. 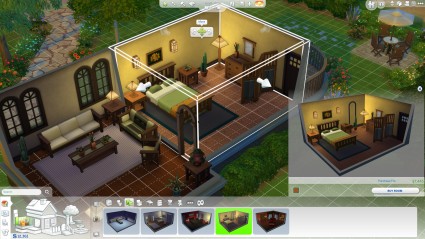 The Sims 4 does tend to suffer from the success of its predecessor, and whereby the end of its life cycle The Sims 3 was a well-honed game, on release The Sims 4 experienced all the glitches and problems that would be expected of an early build game. Like the missing content, patches serve to make the game less glitchy with time, and what could once have been game ending glitches, are now a mere memory. No more demon babies (thank God).

Fans of the previous game, and all its expansions, may be disappointed with the lack of choice in The Sims 4. The omissions could be forgiven, if not for the minor game faults which sour the experience. The beauty of modern gaming lies within the ability to update the games, rather than release new copies, so with some patches EA can make The Sims 4 live up to the expectations that it garnered pre-release.

Creating realism within The Sims world is paramount to enjoyment of the game, but too much realism is a bad thing. No one wants to play a game where their Sims are living the same life the player is living in the real world. The Sims is all about excitement, playing out dreams, and exploring the unknown. The Sims 4 doesn’t have much of that, as a basic game. There are limited career paths to explore, and getting promotions seems to take longer than before. Relationships are harder to build, with the mood of each Sim impacting on the success of each interaction. Where previous games have rewarded an interaction queue full of flirting, The Sims 4 makes you consider every interaction before committing to it.

Sims tend to display moods similar to young children; when they’re in a sad mood, hungry or tired, it can be difficult to get them to do anything you want. Forgetting to celebrate a Sim’s birthday will put them into a two day sulking period, where all they want to do is hide depressed under their bed-covers. Dependent on their traits, most Sims will obtain the same moods following certain actions, so it’s easy to learn how to avoid and activate moods.

The Sims 4 does impress with the addition of moods, which affect your Sims in a number of different ways, with varying degrees of influence. Most noticeably, though with minor impact, the Sim’s facial expressions, stance and walking style will change. Flirty Sims will saunter around, whilst energized Sims appear pepped up. Conversely, tired Sims will move sluggishly. 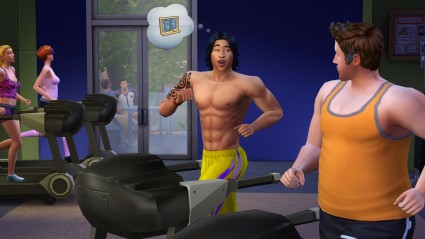 Interactions are seamless – once you find other Sims to interact with

Of course, interactions are a moot point, unless you can meet other Sims to interact with. Meeting Sims in The Sims 4 is nigh-on impossible. There seems to be a lack of them to meet within the two towns. Unable to meet any other teen Sims, my exploration of Sim relationships has been solely with adult Sims. Teens have no distinguishing features, and only appear slightly shorter than adult Sims, so it’s hard to pick them out in a crowd. You can have your Sims interact at school or work, and whilst it fills the social meter, your Sim won’t make any new acquaintances, and they won’t bring any other Sims home unlike previous games.

The Sims 4 still has some way to go to match the success and depth of its predecessors. Currently, it’s not worth abandoning the years of expansion packs The Sims 3 has behind it, and die-hard fans will likely be disappointed at the lack of customisation options and omissions of key features from previous games. Waiting for patches and the inevitable expansion packs may seem like a better option. For the casual adopters of the series, The Sims 4 has changed enough to warrant a look-in, though it does often feel like a step in the wrong direction at times.