Creative Assembly have been making Total War games for about fifteen years at this point. That’s a lot of time, not only to refine the core of what makes your game good, but also flesh it out with other ideas. When combining that many years of experience with a narrative and universe as richly detailed as that of Games Workshop’s thirty year-old Warhammer series, it’s okay to expect something good.

I’m certainly no old hand when it comes to Total War, having only dabbled with Shogun 2 a few years ago, but this Warhammer iteration ticks a lot of boxes thanks to large-scale battles that require a deft tactical touch, meaningfully different factions and engaging mechanics.

The campaign provides two distinct layers of strategic gameplay that are probably deep enough to have an entire game focused around them. Having them together, working as cohesively as they do, is something special and makes Total War: Warhammer another must play for strategy fans, in what’s turning out to be a bumper year for the genre.

Total War: Warhammer’s campaign lets you select from four unique races that each utilise different mechanics, allowing for profoundly varying play styles. The Empire, for instance, are the Human player race that begins its campaign amidst a civil war. So not only do you have to aggressively deal with rebels within your lands, but also manage relations with the other human races, each ranging from pacifist to hyper-aggressive and downright warmongering.

The Dwarves’ strong trade and engineering traits afford them an expansive technological tree to research, but their underground living preference means they can’t use cavalry or magic units. Meanwhile, the Greenskins – better known collectively as Orcs and Goblins – offer cheap and large units with which to plunder the land, but cannot trade. Then lastly you have the Vampire Counts, who can literally raise armies from the dead. Awesome. 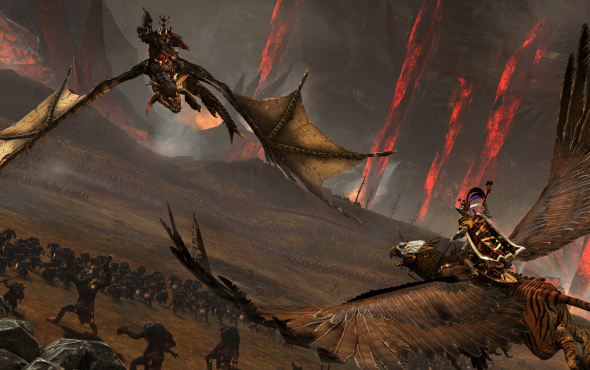 There is only war…

Each faction is a mere pawn in the greater melting pot that is the campaign itself. There are at least twenty separate factions and provinces for every race, each vying for a greater presence in the region. Having so many factions so close together means things get moving ahead pretty quickly, which normally goes against my relatively defensive playstyle. I generally prefer to build a solid foothold in my current lands, gaining armies and followers in an attempt to bolster the homeland before attempting any kind of aggressive expansion.

This was a vastly different experience, though, thanks to a robust tutorial system. It certainly encouraged a more ruthless style of play than what I’m used to, and I’ll admit it was freeing, to a certain extent, to assert my authority over the region early and then expand outwards in order to gain control over the other factions. It wasn’t long before the diplomatic requests started coming through, pleading for peace and common ground. Those who offered enough gold were usually successful. Those who did not were either wiped out or absorbed into The Empire after having their armies and settlements pummelled.

Moving your armies across the strategic map and deciding where to focus attention feels largely dictated by your immediate needs. Certain factions will always be your enemy, and if you happen to have an enemy settlement close by, you’ll need to take care of it quickly in order to lessen the impact of its presence. Enemy armies can raid settlements, looting gold, kidnapping people and increasing the chaos within a region. As an area’s chaos level increases, so does the public unrest, creating inefficiencies within the system. This has knock-on effects, like interrupting trade and other economies, causing your treasury to drop. There is a certain level of micromanagement required to keep on top of everything, especially in the mid-to-late game as things start changing on a more regular basis.

Two main units dominate the strategic landscape – Heroes and Lords. Heroes are units that can be moved throughout the strategic map as well, just like an army can. They have more versatile uses, however, either being deployed in a home region to provide buffs to public order or army upkeep costs, utilised to block an enemy army’s advances, or deployed within an army itself as another unit on the battlefield. They can also attempt the assassination of an enemy lord who may be terrorising one of your territories. There is a small chance they will fail, however; so such decisions need to have their risks weighed up before acting on them.

Lords are the heads of your armies, leading them both across the strategic map and into the heat of battle. As such, they provide a handful of status effects for the campaign and, for battles, that can alter a number of stats. On higher difficulties, it’s essential to explore the deeper consequences of which Lords are controlling your armies as you can bet the A.I. will be an incredibly organised and relentless opponent. Occasionally, it can seem unfairly so.

Whilst some games handle difficulty scaling very well, this one does not. Granted, I’m not a hugely experienced Total War player but I can tell when I’m being taken for a ride. On higher difficulties, it was often the case that enemy armies knew exactly what I was going to do next and had something ready to counter it. Perhaps there is masochistic side to the Total War community that I don’t know about, and I can only assume the other games are similar, but sticking to the default difficulty feels like the sweet spot to get the best out of the A.I.

In terms of large scale battles, Total War: Warhammer does them pretty well. Army units, both large and small, are each made up of individuals. Zooming right up close, you can see details on your soldiers that you probably wouldn’t think were necessary, but they’re there anyway. Giving such details up close helps provide a sense of grandness to the scale of the battle, which take place across a varied range of battlefields.

Gaining a tactical advantage over your opponents is a must on the battlefield. Getting your archers and ranged weaponry to high ground becomes a quick priority, giving them an easier target to rain steely death down upon. Units can hide amongst forest trees, giving them a line of sight advantage over anyone out in the open. Each of these seemingly minor things can change the tide of a battle, or give you more of a chance if you’re outnumbered.

On a few occasions, I was able to overcome larger armies purely because I was able to get the jump on them by flanking them from the woods whilst they marched carelessly through the open plains. All it took then was a small distraction unit to draw their attention and they were finished. 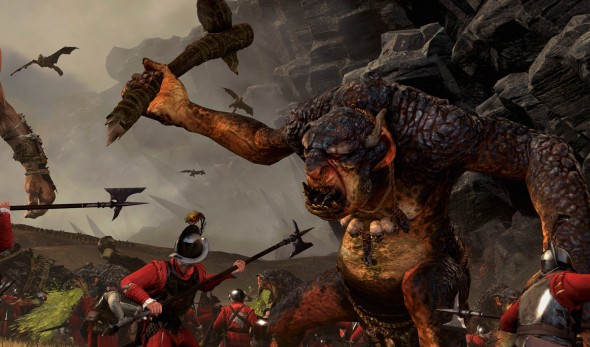 I wonder who’s going to win this battle?

Pulling off a successful attack with a small army is not only a mean feat; it also just looks pretty cool, as do most battle scenes. It evokes an element of grand cinema as you watch a huge army of dwarves charge into a horde of skeletal undead, thunderously clashing with each other. It can look pretty ‘video-gamey’ at times, with a few units swinging wildly at nothing occasionally, but it’s easy to overlook considering the sheer impressive scale of what’s going on. Watching your Lord swipe at a group of archers only for them go theatrically flying backwards is wonderfully satisfying.

On the other foot: it’s equally frustrating being on the end of an absolute beating. It will happen at times, too, and when it does because of a bad choice you made, it will sting, but losing is a big part of this game, too. As the campaign progresses, things get pretty wild in terms of the number of factions vying over land and you’ll likely get spread thin trying to keep your borders intact, and that is totally okay. Failure in Total War: Warhammer is usually not the end of everything, giving you the chance to revisit your mistakes and change up what you need.

As well as the single-player campaign, Total War: Warhammer also features multiplayer, allowing you and a friend to play through the entire thing together. Every race is capable of playing as a co-op race; however, as with the solo campaign, you’ll want to take into account the play-style you’re wanting to run with. You can also jump straight onto the battlefield if watching huge armies stab and smash at each other is more what you’re after.

Total War: Warhammer is a wonderful surprise on all fronts. It has a thorough and detailed campaign that’s both playable and enjoyable in both solo and co-operative modes, and with several layers of classic strategy gameplay over the top, it provides a refreshing mix of two great franchises. It’s as enjoyable as it is rewarding.

In a year that’s chock-full of memorable strategy games like Stellaris and XCOM 2, Total War: Warhammer stands out boldly and absolutely deserves your time.