Despite having zero experience with the previous games in the series, Trials Evolution seemed to call out to me, beckoning me to indulge in its absurd racing goodness. You’ve probably already guessed since I am writing this review that the game’s beckoning became unbearable and I eventually made the purchase. So, after all the foreplay of getting the game, I got down to some serious playing.

“There’s something you should know about me… I just happen to like Trials!”

This is just a small snippet of the lyrics to the first song you will hear when you boot up Trials Evolution, and coincidentally it turns out to be fairly close to my feelings on the game.

The idea behind it all is simple; move a bike from one side of the course to another, over varying obstacles. With such a simplistic gameplay style, what Trials gives the player is immediate access to the ability to understand how to play the game. The controls are so simple that anyone can pick them up and just begin to play. With only four buttons in common use to complete a level, users of all skills levels should be able to enjoy the game. There is a great amount of satisfaction to be had from just completing the levels, but for the more skilled player, there are the medals. The typical gold, silver and bronze can be attained by completing levels in certain times and with certain amounts of restarts.

As well as the standard obstacle and race type courses, there are the circus levels, which have some pretty interesting features. One minute you are exploding off of your bike while flapping your wings (did I mention you have wings?) to get as far as you can down the road, and the next you are controlling a giant metal ball over a series of increasingly difficult platforms. The only negative thing I can say about this section of the game is that there aren’t enough levels. Other than that, it is pretty much hilarity incarnate. 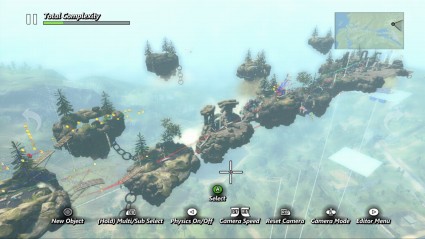 Check out my own personal design!

Personal trial!
As if the abundance of levels in the game wasn’t already enough for you to play, there is a track editor for you to make up your own crazy designs. It comes in two different flavours; the lite editor and the pro editor. The lite editor was already a lot for my brain to take in, but I eventually got there. This basic version of the editor allows you to place a start and finish line, followed by some obstacles in the middle.

The pro editor, on the other hand, lets you go into some crazy detail such as the amount of light that your rider’s headlamp will have while driving the course. If you are anything like me, that level of detail will cause headaches pretty quickly, and the lite editor will suffice. Despite the name, you can still do some pretty amazing things.

What do you do after you have created your masterpiece? How about you share it with the world using the in-game tool? This gives even more levels at your disposal, making the fun almost never-ending. There are some really clever level designs out there to try, too.

At the start of the game your rider is very basic-looking and will only have access to one bike. However, as your progress through the tracks you will unlock loads of new clothes, bikes and parts to help you make them as cool as you want them to. If you are like me, you will try to design some sort of pink monstrosity for your character to ride. 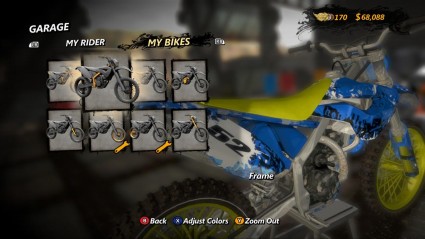 I got to look good!

Riding in style
Considering the scope of the game isn’t huge, they sure as hell want to make sure that the level designs look vast and populated. To start with, the typical course style is full of dirt mounds and green hills to race around on. However, as the game progresses, level design becomes far more complex and in some cases has some incredible animated scenes going on in the background. There is one particular course in which there are bombers dropping their payload in around the course. While this is a little distracting, it certainly helps to keep the adrenaline high.

Each course has some sort of theme for the most part, whether it is war-time, a sewer or a construction site. However, one of the best looking level designs is in homage to the game Limbo. Rather than the typical isometric perspective seen in all the other courses, the camera is fixed 2D and the graphics are purely in black and white. It is a great little tribute to another of my favourite games. 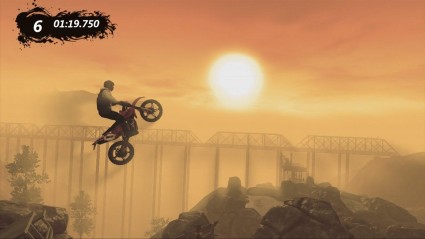 Lighting is one of the more prominent features in the game. The light mounted on the rider’s bike casts amazing shadows and dynamic lighting events, which look incredible. Other examples of this can be seen when the sun is going down and you see a beautiful glow cast across the whole of the scene, once again leaving some fantastic shadows.

Start your engines!
With arcade style games like this, it is sometimes difficult to have a lot of interest in the audio since it is usually more functional than interesting. In the case of Trials Evolution, this couldn’t be further from the truth, starting off with the outlandishly eccentric soundtrack. This features music genres ranging from adrenaline-pumping rock, to some interesting rap songs. Each of the songs seems to be themed and tuned to the game specifically, and compliments the wacky physics-based gameplay.

At a complete juxtaposition to all the high-octane music you get on the menus and during levels, the track editor music is calm and serene. It sort of reminds me a little bit of the music when you would build a house in The Sims. It makes you feel calm and ready to design.

What could you add to kick-ass arcade-style fun, and a kick-ass soundtrack, to make it even better? That’s right! Kick-ass sound effects! There is nothing funnier in this game than when you hit a jump with some big air and you hear your dare-devil driver scream and holler as he plummets through the air, praying with every second that he is going to land on his wheels. Then there are the classic Looney Tunes-style sounds that are used when your character meets their untimely and completely ludicrous death at the end of every course. Having played through many a course, multiple times, I can guarantee you that it doesn’t get old.

Fun for more than one
When it comes to multiplayer, it is refreshing to see that they have not only catered for the typical Xbox Live online functionality, but have also included a great local multiplayer.

The local multiplayer focuses mostly on simple race tracks, which are short but still quite entertaining. Especially when you get the right group of people to play with. There arehours of fun to be had and that’s even before you have taken the game online. Of course the online functionality isn’t just limited to other gaming modes. You can also race against all of your friends in the single-player mode by racing with their ghosts. Unfortunately all you see is a little white orb with the player’s name on top of it, but it still gets you in the competitive mood.

The more you play the multiplayer, the higher the level you can attain, which allows you to unlock more parts for your bikes and clothing for your riders. The multiplayer is fully accomplished, and is really great fun, but I still think that the single-player is where the game excels.

I like Trials!
I love it when games allow a player to get straight into action, and Trials Evolution has this down to an art. As I mentioned, there is something for every skill level here; whether you are content with just completing the courses, or are intent on making sure you do so in the best time possible. 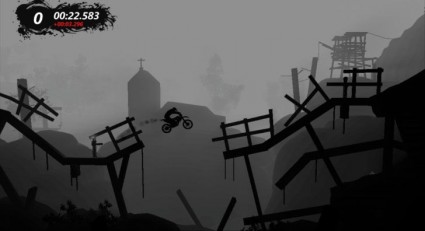 Watch out for the spiders....

Even if you aren’t very good at the game you can still enjoy watching your rider fall off his bike in a veritable smorgasbord of crashes. Trials Evolution has a brilliant sense of self-aware humour that really does come across very well.

Despite having to deal with Super Meat Boy-esque levels of rage and that sudden urge to hurl the controller as far away as possible, Trials Evolution delivers on every level. For a game with a limited scope for mechanics, it manages to do so much with so little and will continue to entertain you for many hours. It is difficult to convey in words how much I recommend this game. It provides fun for the solo player, and even manages to weigh in on some hilarious party play.