It’s 2035, 20 years after the aliens successfully invaded earth. The XCOM team couldn’t hold back the threat of occupation, and were ultimately betrayed by the same countries that had once entrusted them with their protection. XCOM is but a shade of its former self in terms of resources, but it still has plenty of fight left in it. It’s taken up the lead in the resistance fight against the alien’s new world order-cum-government, ADVENT, which has in the years post-invasion managed to convince a fair share of the population that it was in fact Earth who started hostilities, and that the aliens actually came in peace.

We, of course, know this to be a massive load of bollocks. The aliens not only showed up with their massive guns pointed firmly at our heads, but they started pulling some War of the Worlds type shit by harvesting humans for all sorts of nefarious purposes – there may have even been probing. Nevertheless, the resistance is now fighting back, and it’s up to us to stop the aliens one turn at a time.

There are plenty of bumps and a few sucker-punches along the way, for both the soldiers and in terms of XCOM 2‘s technical performance, but it’s still an excellent game that is as challenging as it is rewarding.

XCOM 2 has a lot in common with its predecessor, to the point that anyone familiar with Enemy Unknown will feel pretty well at home from the first click. Everything looks and feels familiar, though jumping straight into the campaign, the quick tutorial goes out of the way to show you the handful of changes to combat. Notably, the inclusion of flanking and concealment – the latter of which allows you to set up and execute some pretty incredible ambushes. Whilst your team is concealed, enemies will patrol the map every turn until they hear or see something that catches their attention, allowing your team to close in, unnoticed. 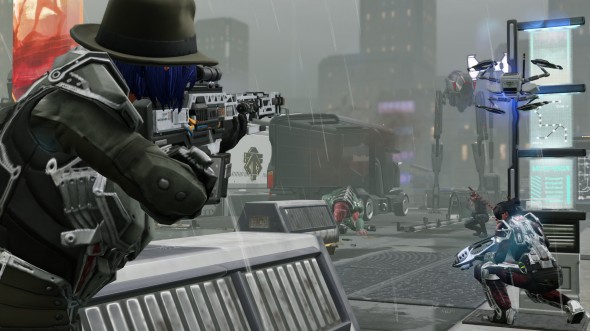 If you manage to scramble the team into position before being spotted, you can catch the enemy off guard and flank them, giving you the advantage. Flanking in XCOM simply means to catch an enemy out of cover or to get beside or behind them whilst they are in cover. This not only negates any cover bonus they may have, but also significantly increases the chances of scoring a critical hit which, when considering the game’s penchant for difficulty, can often change the course of a battle. Keep in mind that enemies can flank your team, too, and they can quickly turn a 6-person rag tag bunch of badassery into a 3-person fight for survival.

Speaking of which, soldier classes have been tweaked, and it’s for the better. Snipers are great when used up high on the rooftops as an outlook, whilst heavy units are best utilised for their suppressing fire and demolition traits. Specialists have the accompaniment of a combat drone that can either attack enemies, or heal and stabilise downed or injured friendlies. When rookies are first promoted, they will have their class picked for them as in the past, though now there is a bit of a twist. Provided you have the right building, you can re-train or point a soldier down a specific training path, leading them to become whatever you need.

Perhaps XCOM 2‘s greatest feat is making your decisions and inevitable mistakes feel like they have the greatest effect on the outcome of a mission, and not just its famed RNG and shot percentage system. You may have all seen that photo doing the rounds on Twitter of a soldier with their shotgun pointed directly at the face of a Muton, and the shot hit percentage reads at only 68%. This is still a quintessential part of XCOM 2, though unlike in Enemy Unknown, I felt this to be a bit fairer in terms of matching hit percentages. I had far fewer cases of missing high percentage shots, which meant that when those shots did miss, they had a much greater impact on my reaction. In turn, lower percentage shots regularly miss, though when they do hit, it’s utterly exhilarating. 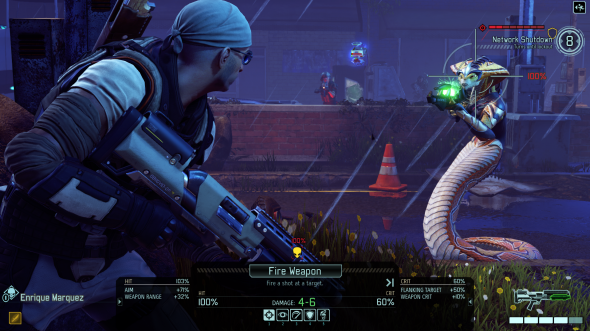 Good luck hitting this one; he looks like a bit of a slippery fella.

Moving your team in groups is essential if you want to combat the ever-present risk of being flanked. You are generally much safer to do things this way, though enemies have some pretty ingenious, and arguably overpowered ways of getting you separated. The Viper has a move that can rip a single soldier out from behind cover with it’s tongue and drag them back to it. Then it wraps itself around the grabbed soldier and squeezes the life from them, which disables them entirely. The Sectoid can cause panic in less experienced soldiers by using a psionic blast, sending them into a confused and uncontrollable meltdown. The ADVENT Lancer has an electrically charged club that can knock your soldiers unconscious as well as cause significant damage. This acts as a double whammy against your unit, as not only is one of your team unconscious and therefore unusable, but another must bear the burden of carrying them to the extraction point, leaving the remaining few to fight off whatever horde that may lay in waiting.

At that point, you’re down by two soldiers, and as you start with a piddly four-soldier fireteam, it doesn’t leave you in a good position. Of course, you could always go back and reload that latest auto save, which is pretty generous I might add, saving after every turn. That is unless you are a sadist, in which case you’ll want to select Ironman mode, which allows only one save file and auto saves after every action. If you’re like me, you’ll make many stupid decisions you’ll immediately regret it, and you’ll lose good soldiers in the process.

“Oh, that looks clear, maybe I’ll run ahead” I’d said, trying to convince myself that everything is not on fire and that everything is fine. That is until I spotted the patrol of large mechanised units that were bearing down on my number one sniper, Lt. Donny “Deadlock” Campbell. I lost two soldiers getting him out of there, but I couldn’t lose him. I just couldn’t. Everything is now on fire.

This train of thought is something you’ll experience quite a bit I suspect, and it’s encouraged by Firaxis insistence on giving a full name and a nationality to every soldier that appears in XCOM 2. This gives you something more to latch onto than a mere nickname, and helps you care much more about what happens to your soldiers out in the field. This is especially true of your more experienced grunts. Not only is returning home from a mission a chance for promotion, which grants a new ability each time, but it grows the bond you form with your team over the course of the campaign. 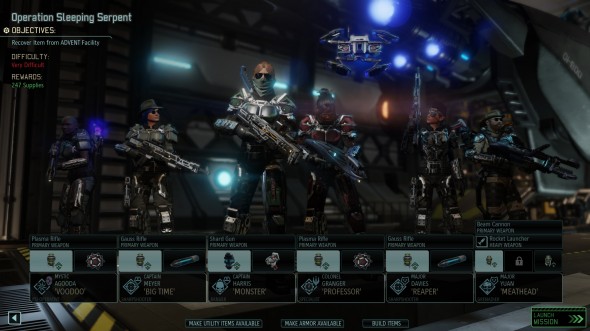 The campaign itself is a lengthy affair. By the time I’d completed the final mission, my Steam counter had ticked past the 40 hour mark. This feels largely dependant on how quickly you grasp what it is the game wants you to do at any given time. Its delivery to the player, however, is a little convoluted. Whilst there are a somewhat varied sprinkling of mission types, the main concerns are dark events and the ‘Avatar’ project.

Dark events are timed events that provide the aliens with an advantage the next time you go out on a mission, or things that will, in general, help ADVENT’s cause. These can be countered by accepting missions from resistance factions from around the globe, however you cannot do this until you’ve made contact with an area. The same goes with events helping the Avatar project. The resistance may discover secret alien facilities, though if they are in regions you have yet to make contact with, there is nothing you can do about them. All the while, as time rolls on, the aliens progress on the Avatar project increases, until finally it is completed. This is when things start going south with great gusto.

It can often lead to a feeling of impending defeat, something which I think is resonant from XCOM: Enemy Unknown. Things don’t turn bad on the the whole for XCOM as quickly as they once did, though, and you are given a fair amount of time to recover before you are forced to submit to defeat. Much of XCOM‘s enjoyment comes from overcoming adversity in the face of seemingly insurmountable odds, and there is no shortage of feeling outnumbered and outgunned in XCOM 2.

One thing I enjoy greatly about the XCOM series as a whole is that, through all the chaos of the invasion and occupation of Earth, it’s gives me a small sense of hope. I am warmed by the idea of the best men and women for the job, regardless of race or sex, fighting as one to protect humanity. It’s a theme projected a lot throughout the game. One of the best moments in XCOM 2 involves bringing out injured soldiers into the fray, and anyone else you can find, such is the desperation of their plight in that moment. 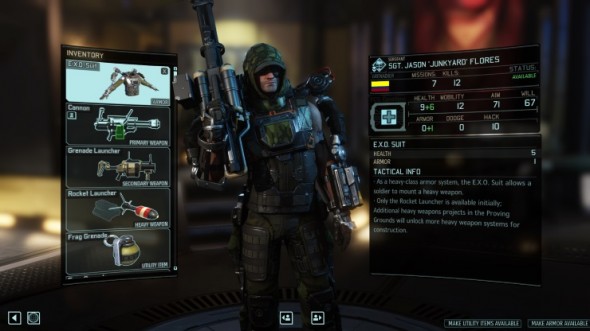 Look at this guy – he just exudes badassery

It’s unfortunate, then, that there are a handful of folks experiencing some pretty bad technical issues with XCOM 2. From the action cam showing nothing but a black screen, to heavy frame rate drops and stutters, to hard crashes to the desktop. My experience wasn’t so bad, with only the odd frame drop on both my somewhat low-spec laptop and my far more powerful PC. Recent patches have done a good job of optimising the games performance though, so the experience appears to be getting better. When things are working nicely, XCOM 2 looks incredible. It can be a touch janky in terms of animations, but textures are crisp and the destructible environments add a real sense of the devastation that war can have on a region.

There is also a multiplayer mode that hasn’t really changed from the previous game, pitting two players head-to-head. Each picks a team that can be a combination of soldiers and aliens, or one or the other if they so wish, then battle it out turn by turn until one team remains. It’s just as, if not more so, tense than the campaign, because people are just so damn unpredictable. It just would’ve been nice to see something a little more different, though thankfully it doesn’t put a downer on the experience as a whole.

The truth is in here…

I have to say that as a whole, I think XCOM 2 is a flat-out brilliant sequel. It’s a refining of the things I enjoyed about Enemy Unknown, along with what feels like a few heavily considered and well balanced additions. There are times when it’s right to shout with frustration, and you’ll probably swear blue that the game is unfair, but I don’t think it is in the slightest. It’s doing what XCOM has always done; holding you responsible for your actions.

With Firaxis continuing to support the game reasonably well after release, XCOM 2 is fight worth taking part in.