Gaming has undoubtedly grown to a more universally accepted medium, which is in stark contrast to its former representation in society as a children’s toy for stupid kids and immature men. Now society better understands our passion, and moving forward maybe those who are still skeptics can at least recognize that men aren’t the only kinds of immature people playing video games well into their thirties. One can only dream, but that is an issue to tackle in another article. In this one we’re going to talk about societal integration, boys and girls. The main point beyond that is the prevalence of literature, and its place in games.

Narrative is one of the things which thrust video games in the direction of being called an interactive experience. The idea is that if a game has a compelling enough plot and halfway decent controls, then it is more comparable to an experience than a game based on the fact that you aren’t really trying to win anything as much as you’re trying to complete a story. This would all be fine and good if there were actually any games with a good narrative. Now I’m sure anyone reading this could probably list off more than a handful of games that they thought had a great story, but that would just prove my point. We gamers can’t just search for games with a respectable narrative; we have to raise the bar for what’s expected of a respectable narrative as well.

In most cases, any plot-centric game could never survive in the format of a novel. Take Konami’s Metal Gear Solid, written by Hideo Kojima, for example. Though most fans of this critically acclaimed series stick with it because of its deep, convoluted story, imagine trying to read something that ridiculously complicated. Many renowned novels such as The Great Gatsby are markedly complicated and can take a bit of time to understand, but there isn’t one bit of nonsense to be found. The long and short of any good plot is that it must go beyond entertaining. Entertaining is the benchmark of any acceptable plot, sure, but should it be the standard by which we judge a good plot? 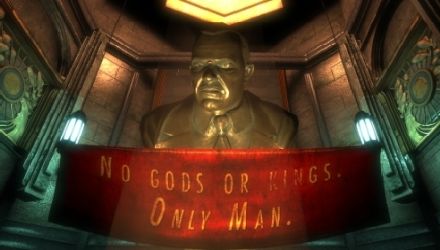 At this point we’re nowhere near ready to have games with amazing gameplay and an awe-inspiring story, but we are at a point where integration of literature should be ousting that of cinema. It’s a sad, sorry joke now to even mention how terrible the majority of movie tie-in games are, but we’ve yet to have a failure when it comes to book tie-ins. A recent and more successful game to try this method is the hugely popular sci-fi shooter, Bioshock.

Bioshock, if you didn’t know, is by and large a big dedication to Ayn Rand, a philosophical Objectivist and novelist. To Ayn Rand, paradise would be somewhere secluded from the rest of the world, where science could thrive, and religion would be squelched eternally. The fine arts and forms of expression would define this place, birthing a haven where the creative could exist in bliss for life. Sound familiar?

Rapture is an underground city which was designed by Andrew Ryan (similar to Ayn Rand). One of the protagonists of the game is named Atlas (ever heard of Atlas Shrugged?), and one of the main antagonists is named Fontaine (The Fountainhead). In Bioshock, Rapture represents Rand’s dream world if it had gone horribly, horribly wrong. There is probably no more harrowing an experience than that of your first fight with a Big Daddy to get your hands on one of those precious Little Sisters and the Adam therein.

This is by no means a piece meant simply to praise Bioshock for what it has done by claiming it is a flawless masterpiece. However it is to say that at some point in the near future we should be able to look back on this game as a shallow experience which barely meets the standard requirements of a game. One can dream, right? 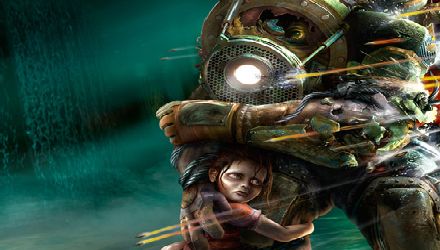 In years to come, Bioshock's narrative should be able to be called 'shallow'.

Luckily, we’re already moving forward with titles like Dante’s Inferno, which looks to turn Dante’s depiction of Hell on its head, spin it a few thousand degrees and then drench it in blood. In terms of blending story with gameplay to provide for an intricate adventure, look for Heavy Rain, a PS3 exclusive title set to release in early 2010. If neither of those grab you, Splinter Cell: Conviction, also slated for a 2010 release, has all the makings of an experience which cannot be replicated.

Until the time comes when we can truly claim that games are on the same level as novels and top-tier films in terms of narrative and theme, we will never have the right to lobby for the idea of games as a comparable experience. By the time we’ve reached such a point in the evolution of gaming, the definition of a gamer will doubtlessly have changed as well. Hopefully we won’t lose what makes us love the games we play now in the process of growing older with the industry. One can dream.