There’s something sinister about the ambiguity of Limbo. Despite being one of the five little titles coming via Microsoft’s third annual Summer of Arcade, it stands out in every way. Wordless, lonely and devoid of any color, it most certainly would be that quiet goth kid who sits in the corner were the Summer of Arcade titles a bunch of school children. Is it worth your money? Well, let’s see…

Limbo has no conventional plot. That is to say the story, if there truly is one, is delivered in such a simple, striking and unique way that it’s nearly impossible to be certain what has happened (or is happening), but it’s also nearly impossible to keep the mind from turning over every scene.

It begins with a child rousing in a dark, shadowy forest of gray and black with no one else around him. Early on, the only other living things he comes across are a gargantuan spider and a small, dog-like creature; but as he travels further and further he finds himself another group of young boys; all of whom immediately try to kill him. All of the other kids he finds are either dead or dying by the time he reaches them, and in some cases their corpses become necessary tools to complete puzzles.

There really isn’t much else to Limbo. There are, of course, some other key discoveries that you’ll have to unearth on your own should you get the game, but beyond what you’ve read the story doesn’t go any deeper. There are only a few cut-scenes, and even these occur during gameplay to keep transition into and out of them absolutely seamless. What results from the vague story and captivating delivery is a unique style of storytelling that, for once, could not be replicated in any medium but a videogame. It’s quite an achievement.

Alone in the dark
Limbo’s gameplay suffers from an erratic difficulty curve due to its unusual design. This may be the first game I’ve ever encountered in which the entirety can be played from beginning to end without one instance of loading. So, if you’re good enough, you can play the entire four-to-five hour experience without one break from gameplay should you keep from dying. As a result, there’s an inescapable feeling of being in a wide open, yet oppressive, world in which solutions to each puzzle could be hidden anywhere, and, for the most part, that is the case. Often there were times I worked my way through a puzzle up to its final point thinking I had everything I needed in the immediate area only to find, upon searching the greater expanse, the final piece was in some far off corner awaiting discovery. 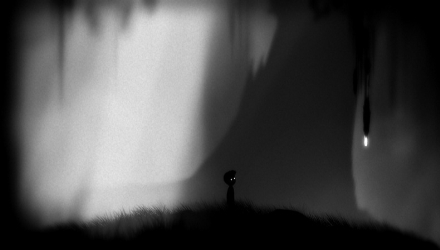 See this worm here? It lodges into your head and forces you to move nonstop in a single direction. Nice, huh?

Don’t let that fool you into thinking this is a terribly hard game. It’s actually painfully easy. The most difficult aspect of Limbo by far is being able to move with precision. Because of how slowly the kid moves and how awkwardly he jumps, judging distances and how quickly you can reach a certain spot always requires a prerequisite death to test how exactly you’ll have to proceed. Put succinctly, most of the game is a chore.

What makes the difficulty curve so unreliable is that every so often you’ll come across an absurdly confusing puzzle that offers absolutely no hint to its solution and requires precise timing, accuracy and some luck (which means it will take many, many tries). On the other hand, there were times when I got stuck on a puzzle that was ostensibly impossible. In one case I went at it for hours and hours, cut the game off, prayed, ate some fish (I hear it’s brain food) and played a match of online chess (to strengthen the mind!) only to return to the game and find that all I’d overlooked was a very minor detail in the puzzle. Once I’d noticed that, the puzzle was depressingly simple. This happened many times, as (though the game looks really great) often the plane you’re playing on won’t be in the foreground, which means certain elements of the puzzle can be obscured or mistaken for parts of the background. As you can imagine, that’s incredibly frustrating.

As long as little hitches like that don’t arise the game is a smooth, thought-provoking trip through a mysterious and harsh world. Trust that when I say you will die, reader, I mean you will die all the time. In Limbo’s unforgiving world, anything can kill you from hidden, oversized bear traps that will behead you to mobile gun turrets that will perforate you. Even little mistakes in handling the puzzle can end your life. In one case a giant circular saw-blade was coming my way ready to slice me in half. I hit a button that activated a crane which began to slowly open up to drop a box which I would use to jump over the blade. As the crane slowly opened, I became impatient and ran over, trying to reach it just as it would land only to have it drop on my head and knock me out. I covered my eyes as the kid was bisected.

Funny moments like that are abound in Limbo, and the punishment for death is never more than having to restart any given puzzle. Checkpoints are forgiving, and there’s no loading between deaths, so you’ll always be able to immediately jump back in.

Oh the beauty of obscurity
Visually, Limbo is absolutely amazing. Its detailed backgrounds thematically contrast well with its shadowy foreground. What results is an experience in which the scarcity of information about the kid and the world he’s in is replicated in what you see upfront. The detailed backgrounds reflect the world’s complexity buried beneath the raw facts of the situation: That you are a lonely child in a murderous land which steals life from all without reason or hesitation. It’s a beautiful game that uses simplicity to convey the most difficult of concepts with its basic, tell-tale imagery. 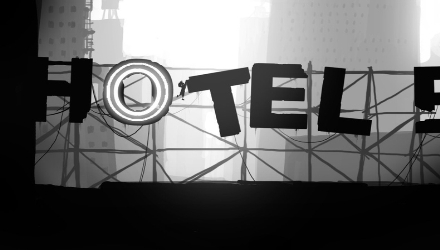 This may seem to require simple platforming, but when those dim letters light up it'll get ugly.

Beyond that, death in Limbo is as gut-wrenching as in any high-end shooter or horror game (like Dead Space or Gears of War). Though in those games you may wince at the over-the-top gore and detailed visuals, in Limbo you’ll clench all over from the finality and swiftness with which every life is doused. Giant spiders will force their thin, long legs through your skull and out your lower back, and then apathetically toss your corpse. Homicidal children chasing you across trap-ridden paths will be crushed beneath tremendous slabs of stone, or will drop into spike pits and be skewered.

Wait… what was that sound?
Limbo’s audio is yet another flawless part of its package. Every sound (be it arrows rushing through the air or the reverberating buzz of a massive fly twice the size of a man) conspires with the game’s haunting aura to keep you fearful to press forward but too enrapt to go back. Your heart will literally stop the moment you hear the chorus of snaps as a tree trunk slowly topples and obliterates you. Conversely your heart will race furiously the first time you find yourself trapped in a pit overflowing with water once you realize your courageous child can’t swim.

At the end of the day
Limbo is, above all, a masterfully designed experience. It seems that, for the sake of such a wondrous experience, the actual gameplay was left mundane and barely appealing. Limbo is at its best when everything is flowing and you’re moving through this experience in one go, navigating the world speedily and just escaping death by inches; so its replay value is incredibly high. With its impeccable sound and looks, and its flawless execution, it’s quite a value, especially at a time when the release schedule has thinned. Without a doubt, this game should be on your hard drive. It should be on your mind and it should be in your memories. For it offers something unfortunately rare in this world: An experience impossible to achieve outside of a videogame.