DeKonstructed is a four-part editorial that focuses on different facets of Mortal Kombat’s ninth iteration, while touching upon the series’ history. Part 1 focuses on the game’s violent finishers: what they meant when the series first appeared, and what they mean now.

I can only vaguely recall when I first became aware of Mortal Kombat, but I certainly remember how and where. In the height of my obsession with Street Fighter II, I was in the city’s arcade with two buddies. My friends grew bored of waiting for one of the Street Fighter cabinets and ventured off to kill some time on other games. Undeterred and happy to watch the action unfold as others hammered the buttons, I continued waiting for my turn on Street Fighter, until I felt a tap on the shoulder.

“You gotta see this!” one of my friends told me.

I followed him to the other side of the arcade, where my other friend and another kid (I didn’t know this fella) were playing this new game called Mortal Kombat.

At first glance I was definitely unimpressed. “Looks like Pitfighter” I remember thinking, down to its motion-captured graphics. It seemed to lack Street Fighter’s grace, but it made up for it in sheer brutality, with pixellated claret flying everywhere. Still, I remained unconvinced and was just about to wander back off to the Street Fighter crowd, when it happened.

The fight was over and the words ‘Finish Him’ became emblazoned across the top of the screen, before this unknown kid tapped in a button combination.

His character, a blue ninja, then ripped my friend’s fighter’s spine right out of his neck. After a couple of seconds of stunned silence, you can imagine the reaction from this small bunch of 11-12 year olds.

Despite still preferring Street Fighter, in the weeks that followed, there was certainly a buzz around Mortal Kombat that I just couldn’t ignore. The kids at school were all talking about the Fatalities and their rumoured combinations. We’d all become fascinated solely by these violent finishers. Why, though?

To me, it was the same type of feeling as when your parents allowed you to stay up late and watch a horror movie. It was a forbidden fruit; a little win because you were doing something you know you shouldn’t be allowed to at your age. Only Mortal Kombat was better than those scary movies, because the adults were, at that point, oblivious to it. 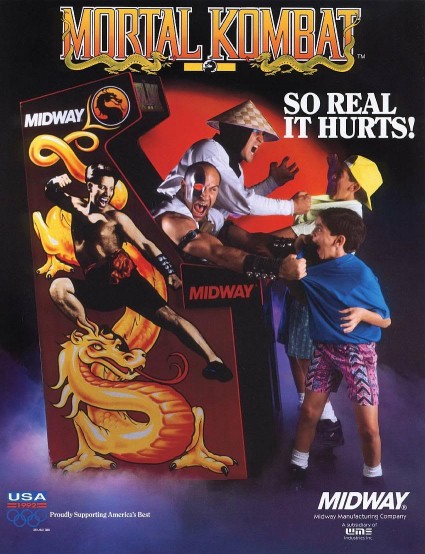 This wouldn’t happen these days…

Right or wrong, that’s the way things were back then. Games with mature content were marketed towards kids our age. Even when they weren’t, we were experts at getting our parents to allow us access to games with violent or unsuitable content. It’s just a game after all, right?

Of course, looking back now, the game was so incredibly childish that it bordered on parody. There was a certain comedy that we just didn’t get when we were young and stupid. Still there we were, thinking we were oh-so-grown-up by accessing this content that only appealed to us on the most primitive level.

Obviously, things are different now. If today’s classifications and laws were in place back then (or even just upheld), then we would never have gotten anywhere near the cabinet in the first place. In its current-day format, the game is still famous for its brutality, only today’s technology has obviously ramped up its graphic nature.

Australians know this only too well, as the rebooted Mortal Kombat (also known as MK9) was refused classification early last year. Despite being refused by a classification system that uses a game’s suitability for minors as the basis on which to gauge whether adults should be allowed to play (derp), it was no surprise to see that the fatalities were the cause.

Regardless of its ban, I’ve been able to spend some time with the game on Vita, and it’s every bit as brutal as I’d believed. It’s also a brilliantly refined and balanced fighter; a game back on form after umpteen years of silliness and gimmickry. It represents the most I’ve been into a Mortal Kombat game for a long time. It’s the first Mortal Kombat game I’ve genuinely loved, rather than simply liked, or just enjoyed in passing.

The game, however, has a far more serious tone than anything before it, stripping away the ridiculousness and lite-Kart Racing tangents. While the violence takes a different, more serious tone, the Fatalities are essentially no less childish than they were in 1992, in that each attempts simply to shock in same way it did back then, only the vehicle for that is more sophisticated.

Since playing it, though, I’ve been thinking heavily about my initial reaction to the series’ famed violence back in ’92 and my response to it now, and I find myself almost apathetic. No longer do I verbally express how ‘cool’ it is to dismember one of the other characters, and I derive more pleasure from the art of successfully performing the physical actions for the Fatality than I do from the bloodshed they trigger. Some might say I’ve become desensitised to the violence; I’d simply say I’ve grown up.

I do think they have their place, but I do have to wonder if Fatalities are even needed any more. Back in 1992, Mortal Kombat lacked the finesse and flow of its peers, so the Fatalities were an important talking point for its players. At this point in time, however, the core game is more than good enough to speak for itself. MK9 wouldn’t be any less impressive or enjoyable without them and one of the series’ absolute best single-player modes, the Story Mode, does away with them altogether, unhurt by their absence in the slightest.

Despite what I thought in my youth, my perception of ‘mature’ has changed in transition to adulthood. What I thought was mature as a kid, has become painfully childish with retrospect, even in its darkest form.